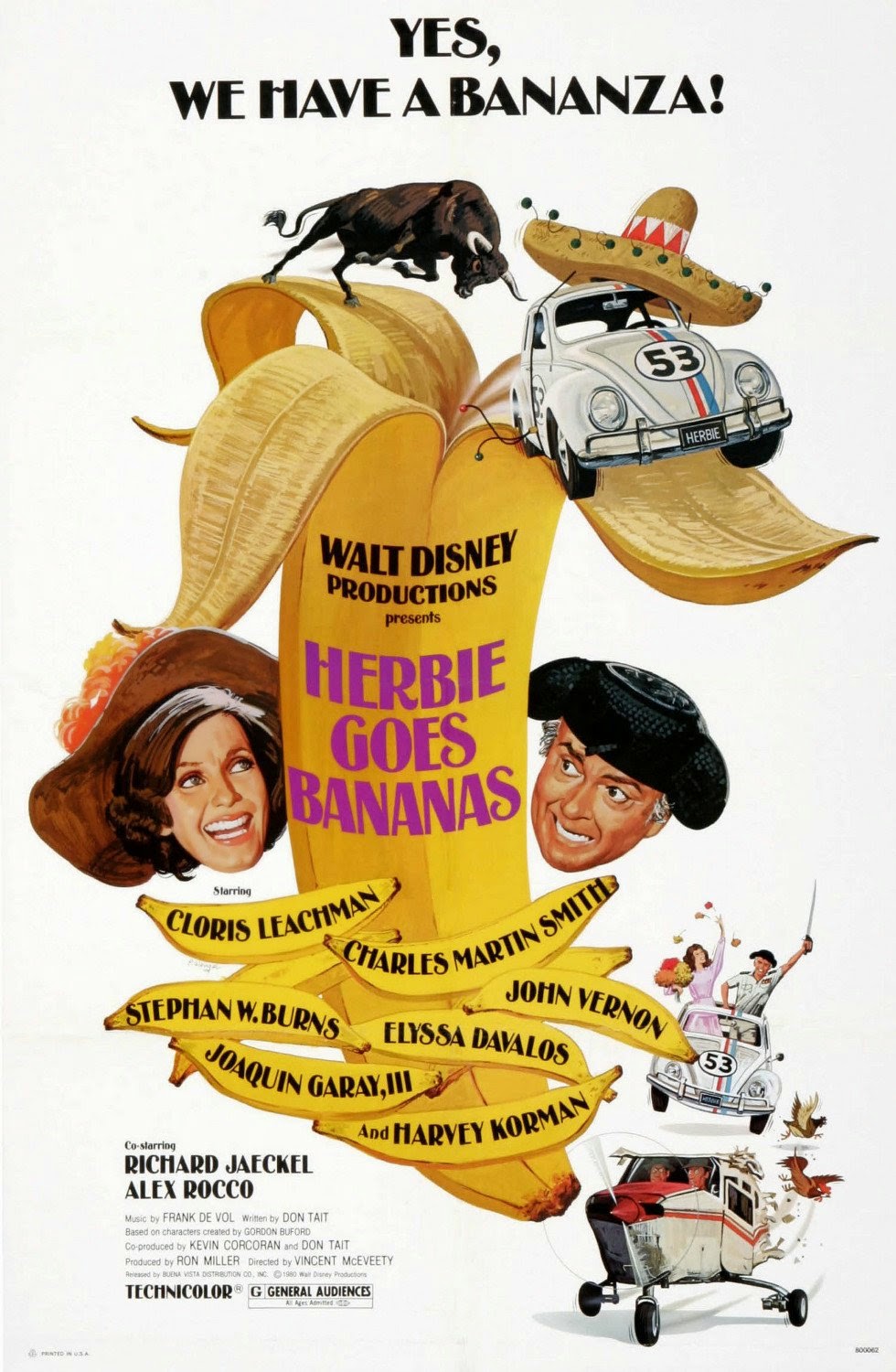 Beep beep, ha ha, it’s Burl here with a review of another Herbie picture! I sort of already knew Herbie Rides Again would be, or rather remain, my favourite Herbie movie after some recent re-viewings of the series! Watching Herbie Goes Bananas helped confirm this, though I don’t want to give you the idea that I disliked it!
I mean sure, it’s got problems! But what movie doesn’t? I will come right out and tell you what I perceive as the single most crippling deficit this picture possesses: not enough Herbie! But if you like slow disco dancing in costume, this is most certainly the picture for you!
Now, I can’t remember how they left it at the end of Herbie Goes to Monte Carlo, but this one begins in Mexico, in Puerto Vallarta, reeba reeba! Two American do*fuses get off the bus and are immediately robbed by a grinning orphan! Their mission is to pick up Herbie, who has been willed to one of them by his uncle or something; and we must suppose that his uncle is Dean Jones! Meanwhile there are smugglers, who are played by the fantastic trio of John “Point Blank” Vernon, Richard “The Dark” Jaeckel and Alex “Gotcha!” Rocco! All of these people get mixed up together and there’s a lot of running around, but nothing much actually happens!
And this is the other major problem with the picture: like almost all the Herbie pictures, it’s overlong! (Herbie Rides Again is of course the marvelous exception!) There’s too much padding, like the disco dancing, or the two guys talking! (One of those two guys is played by the always welcome Charles Martin Smith of Starman!)
Then the action switches to a cruise ship captained by Harvey Korman, ha ha, and among whose passengers are Cloris Leachman and her owlish niece! Of course the orphan is a stowaway, and Herbie creates havoc in the hold! Korman’s Captain Blythe is a psychotic martinet who makes Queeg look like a calm voice of nautical reason! Eventually Herbie’s misbehaviour rouses Korman to an act of high-seas justice: Herbie is shoved over the side in a ceremony with all the pomp and protocol of an Admiral’s funeral!
But from Herbie’s encounter with The Baby himself in the guise of a hippie surfer, we know the little bug is able to swim! Still, it’s a filthy and exhausted Herbie who gets pulled out of a Panama Canal tributary by a burro, some bad hombres and the orphan, miraculously in just the right place! There are some little chases, some menacing from the bad guys and an overextended bullfight scene, and eventually Leachman, Korman and the young folk all end up together in an old bus, on the trail of the orphan and his revitalized auto-pal! Herbie never participates in a race but he does battles a small plane! Herbie rips the tail off and then sucks Alex Rocco out the back like a Junior Mint! Ha ha!
Herbie has a lot less personality in this movie, despite the fact that they have him near-talking with his horn and pressing buttons with his antenna! And though they realized they could never match Keenan Wynn, the bad guy from Herbie Rides Again, so had to break his character in half to share between Korman and Vernon, the movie is still undeniably possessed of really fantastic cast! It has a cheery travelogue feel at times, and the kid, who might easily have been intolerable, is instead tolerable! And in what I suppose is meant to be a complimentary comment, I’ll just say that it doesn’t go as crazily overboard with the faux-Mexican goofiness as they might have!
It could use a little more pep and a lot more Herbie, and the plot is baggy and the principals are mostly absent in the climax, but there’s nevertheless enjoyment to be had; and Herbie does indeed go bananas, if briefly! Plus it's got some old ringers in it, like Fritz "The Errand Boy" Feld as a chief steward and Vito "Von Ryan's Express" Scotti as a dogsbody! I’m going to give Herbie Goes Bananas one and a half wipers third class!
Posted by Burl at 23:44