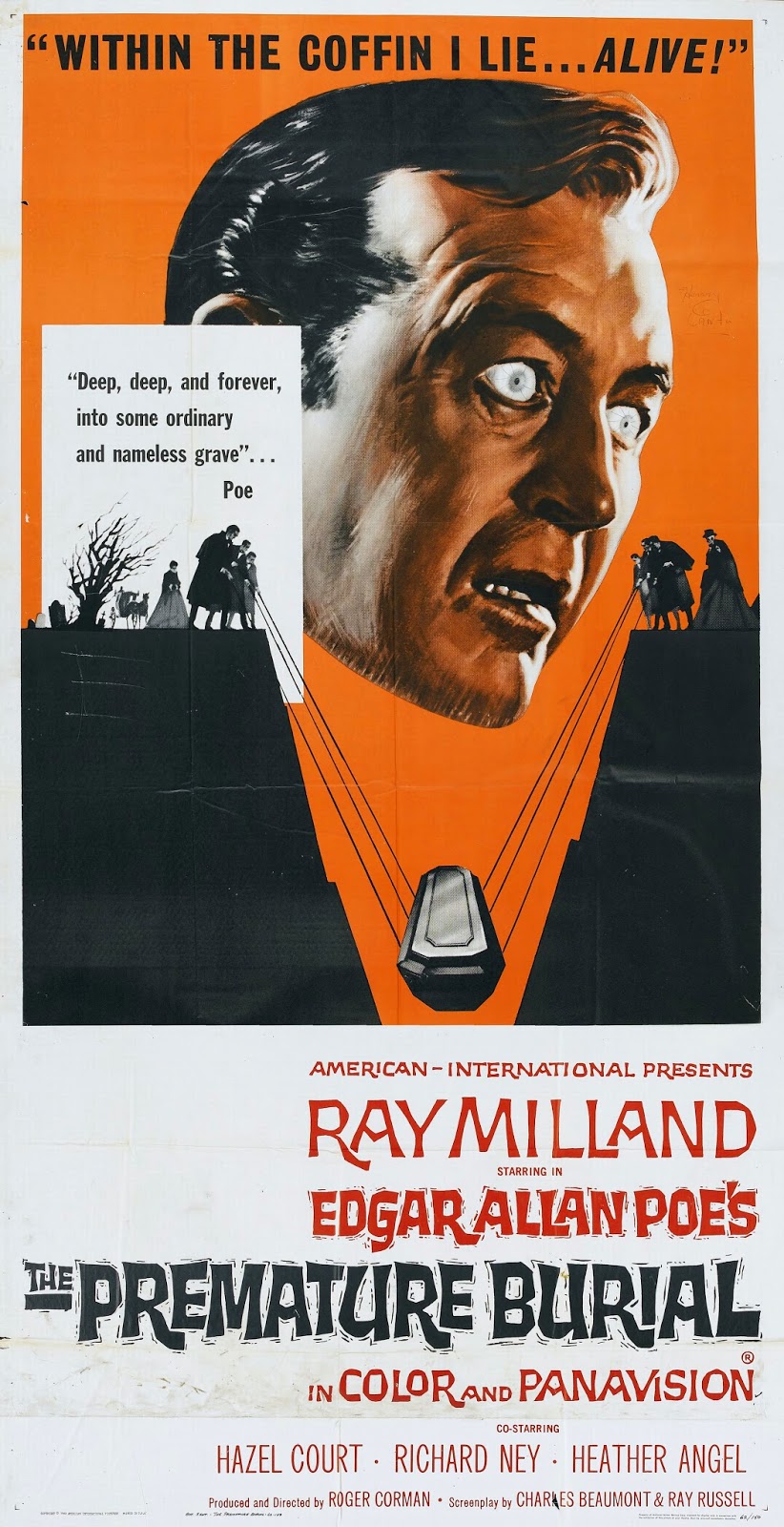 Ha ha, the bell tolls twelve, and it’s Burl! I’m here to review one of the Roger Corman Poe movies, and if you know immediately what I’m talking about, then you’re in the right place! (And if you think to yourself that Corman prefigured this series with the walled-up black cat in A Bucket of Blood, you’re doubly in the right place – sit down and have a brandy, ha ha!) However, if you need a little reminder that, between 1960 and 1965, Roger Corman made a series of relatively lavish movies based on Edgar Allen Poe stories (with a little Lovecraft tossed in the mix, ha ha), then don’t worry, friend, you’re still in the right place!
The one I’m talking about today, Premature Burial (no “The” in the credits, ha ha!) is probably not anyone’s favourite of the Poe pictures (unless they’re a big fan of Ray Milland), but neither is it likely to be at the bottom of the list either, unless they hate Ray Milland! It’s unique in that it stars not Vincent Price in the leading role, but rather, you guessed it, Frank Stallone! I mean Ray Milland, ha ha!
Milland plays Guy, an artist with a morbid fear of being buried alive! Ha ha, this terror stems from his conviction that his father, a cataleptic, was interred alive these many years ago! Guy’s uptight sister disputes this, as does his would-be fiancée Emily, as does Emily’s father Dr. Gault (who’s played by Alfred from Batman, ha ha!), and as does family friend Miles Archer! The only person in the perpetually fog-shrouded house who doesn’t appear to have an opinion is the butler!
But there’s something afoot! Guy and Emily end up getting married after all, but Guy’s personality shifts violently, and he becomes worried and snappish! He retreats into a self-built crypt and paints dark and terrible paintings! And he outfits his crypt with all manner of escape mechanisms, which he shows off proudly in a terrific scene halfway through the picture! Emily and the rest finally convince him that he mustn’t dwell so on this unlikely eventuality, and they persuade him to blow up the safety crypt!
Things go wrong from there, and indeed there is a burial alive, and many of the characters come to various sorts of sticky ends! There’s a pair of gravediggers played by John Dierkes (the Tall Soldier from John Huston’s The Red Badge of Courage) and the great Dick “Apache Woman” Miller! Dierkes gets a pretty stiff neck-twist and Miller a fatal poking! We also have death by electricity and gunfire, and all of this takes place among freighter-sized drifts of studio smoke!
The picture looks great, with extremely atmospheric widescreen photography and marvelous sets! Milland is pretty good, but sort of one-note; and the rest of the cast is solid but unremarkable – except of course Miller, with his top hat and dirty mole teeth! It’s a pretty talky picture too, but does offer up some scares and shudders and the solid Corman craftsmanship that was on view during this period! I enjoyed the picture, even if it was a bit stuffy, and I’ll give it two and a half pullcord escape hatches!
Posted by Burl at 22:12