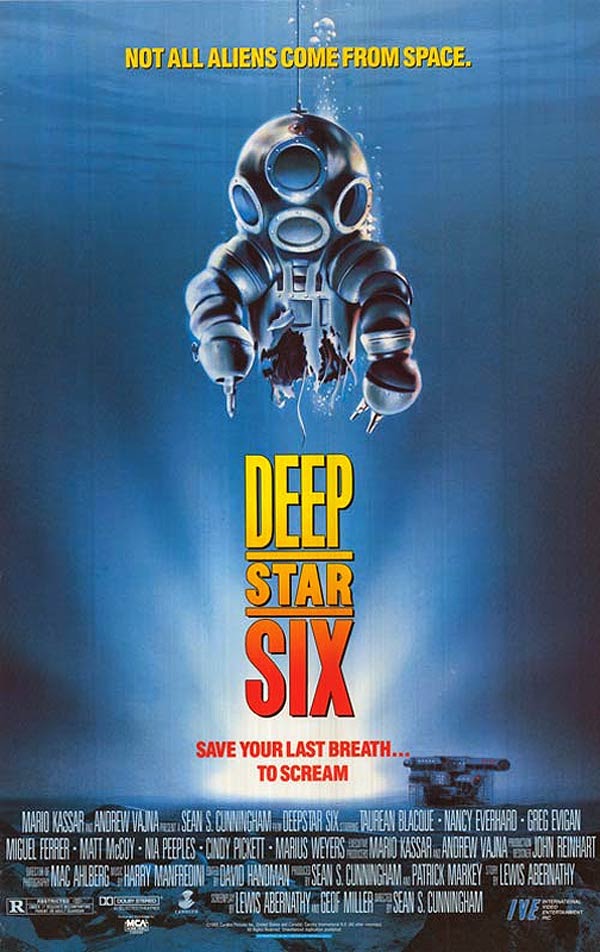 Blub blub, it’s Burl, here to review one of the several underwater movies that were released in 1989! These titles included The Abyss, Leviathan, and this one, Deep Star Six! Ha ha, I did my duty by seeing each one of these in the theatre, though I missed out entirely on their waterlogged little contemporaries, Endless Descent and Full Fathom Five!
Of the big three, Deep Star Six is the closest to being something Roger Corman might have made! It’s a killer crawdad picture after all, as a creature resembling a vagina dentata with google eyes invades an underwater facility and wreaks – well, not quite as much direct havoc as you might hope, but he certainly causes problems! Ha ha! And the movie was directed by Sean S. Cunningham, he of Friday the 13th fame, so you know B-movie goofiness is a distinct possibility!
Deep Star Six is set in another one of your standard-issue seabottom complexes, this one some sort of military-industrial operation involving undersea missile platforms! It doesn’t really matter what they’re doing down there, because whatever it was, it would probably have lead to the same thing: the reckless opening of a cavern and the release of the crabby creature!
Ha ha, he’s no mere Island Claws-style giant crab – more of a close cousin to one of the grabby varmints from The Lost Continent, I would say! It’s what the monster from Blood Beach probably should have looked like, ha ha if we were ever given a proper look at him! But the hardshell in Deep Star Six, as irate and hungry as he is, doesn’t create nearly as much trouble for the characters as they give themselves! One of them, a Hudson figure played by Miguel “Robocop” Ferrer, is about the whiniest fellow ever seen on screen, and his tenure on the undersea platform is a catalogue of fatal blunders! It’s really just one fatal blunder after another with this guy, ha ha, and of course he saves his last one for himself!
The boss of the platform is, if you can believe it, the guy from The Gods Must Be Crazy! Ha ha, no, not N!xau, but the other one! (I wish it had been N!xau, though -  that would have been great!) His staff includes B.J. from that terrific program B.J. and the Bear, and, in another unfortunately abbreviated role, a neckbearded Thom Bray from Prince of Darkness, also known as the nerd from Riptide! (Or was it Simon & Simon?) There’s also a Russian guy who reminded me so strongly of Yakov Smirnoff I thought I was watching Brewster’s Millions again! Really, most of the cast are TV actors willing to get wet, and they’re a game bunch!
As I’ve implied, the monster doesn’t get all that much to do in the picture! I don’t think he puts an actual biting on more than two of them, though one of these incidents, the guy in the metal diving suit who gets chomped like a Jolly Rancher, is memorable! Ha ha! The rest is blunders, poor judgment and faulty equipment! Of course this is all indirectly caused or helped along by the crustacean’s presence, but still, he should have got those big flappy jaws working away more, and not just to emit roars like the Creeping Terror carpet monsters! The movie as a whole takes too long to get going, and there’s some soap opera stuff that might have been dropped!
A final scene, shot in a studio tank so obvious it lends an air of poetic unreality, brings us just the sort of shock moment Cunningham supplied at the end of Friday the 13th, and thus is the movie concluded! It’s a real beezer, though I kind of like the look of it, and was amazed to think of myself at an age where movies I saw first-run at the theatres have trick effect shots that now look like something you’d have seen in Irwin Allen’s Voyage To the Bottom of the Sea! For being number three but trying harder, but also for not showing as much pep as it could have, I give Deep Star Six one and a half nonsense vector-graphic radar screens!
Posted by Burl at 07:42