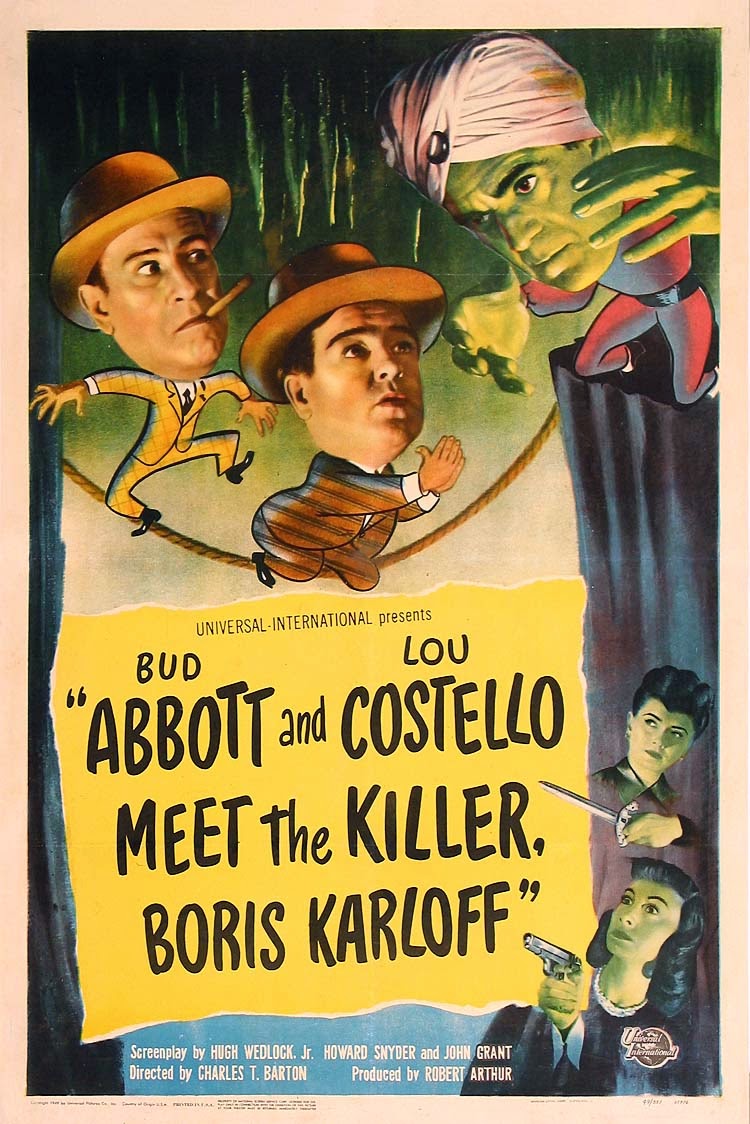 Ha ha, numbskulls, it’s Burl! No, I don’t really mean to call you numbskulls! I’m just reviewing an Abbott and Costello picture, that’s all! And you know, I haven’t actually seen too many Abbott and Costello pictures, now that I come to think about it! Oh sure, I’ve seen The 30 Foot Bride of Candy Rock – ha ha, who hasn’t? – but not very many of the classic, actual movies featuring the two of them doing their routines!
But now I’ve seen this one, ha ha, and with a title like that, who could resist? I’ll watch anything with Boris in it, though his last few pictures are a little depressing, ha ha! But he was a great actor, and, I have it on good authority, a great fellow as well!
Now of course this picture belongs not to Boris “The Man They Could Not Hang” Karloff, but to Abbott and Costello! And these two jokesters do it up pretty well, I must say, especially Costello! He’s really pretty funny in his role as an accident-prone bumbler of a hotel porter! Abbott plays the house dick, and that makes me wonder if hotels still have detectives like they used to! Anyway, the two fellows work at the Lost Caverns Hotel, and when eminent attorney Amos Strickland comes in one night on the eve of the release of his memoirs, has Costello fired and then gets murdered, the stage is set for all manner of slamming-door shenanigans!
There are plenty of murders, and all the corpses pop up in Costello’s closet, so it looks pretty bad for him, ha ha! Karloff is lurking about as a menacing swami, and the scene everybody mentions is when Karloff tries to hypnotize Costello into committing suicide, but the tubby bellboy is simply too stupid to accomplish the task! But, ha ha, there are funnier scenes than that, or at least I thought so! I did enjoy when they finally made it into the caverns below the hotel (for what seems like forever, ha ha!) and Costello became a human drain-plug! You’ll have to see it to know what I mean, and it’s a pretty impressive feat of floor effects!
Costello’s delivery is often hilarious, particularly whenever he underplays! Abbott is pretty much the ideal of the straight man! On the other hand, the movie is pretty repetitive, and lots of the jokes are flat bananas! Costello is on the border of being a character like Bill or Sam or Radio, and I can’t say that his slow-wittedness didn’t get annoying!
I got some laughs, and the foreground matted caverns are really impressive and beautiful! Great stuff! But it goes on a little long and doesn’t make quite as much sense as it should! I’m going to give Bud Abbott and Lou Costello Meet The Killer, Boris Karloff two coffin-shaped laundry trollies!
Posted by Burl at 00:16