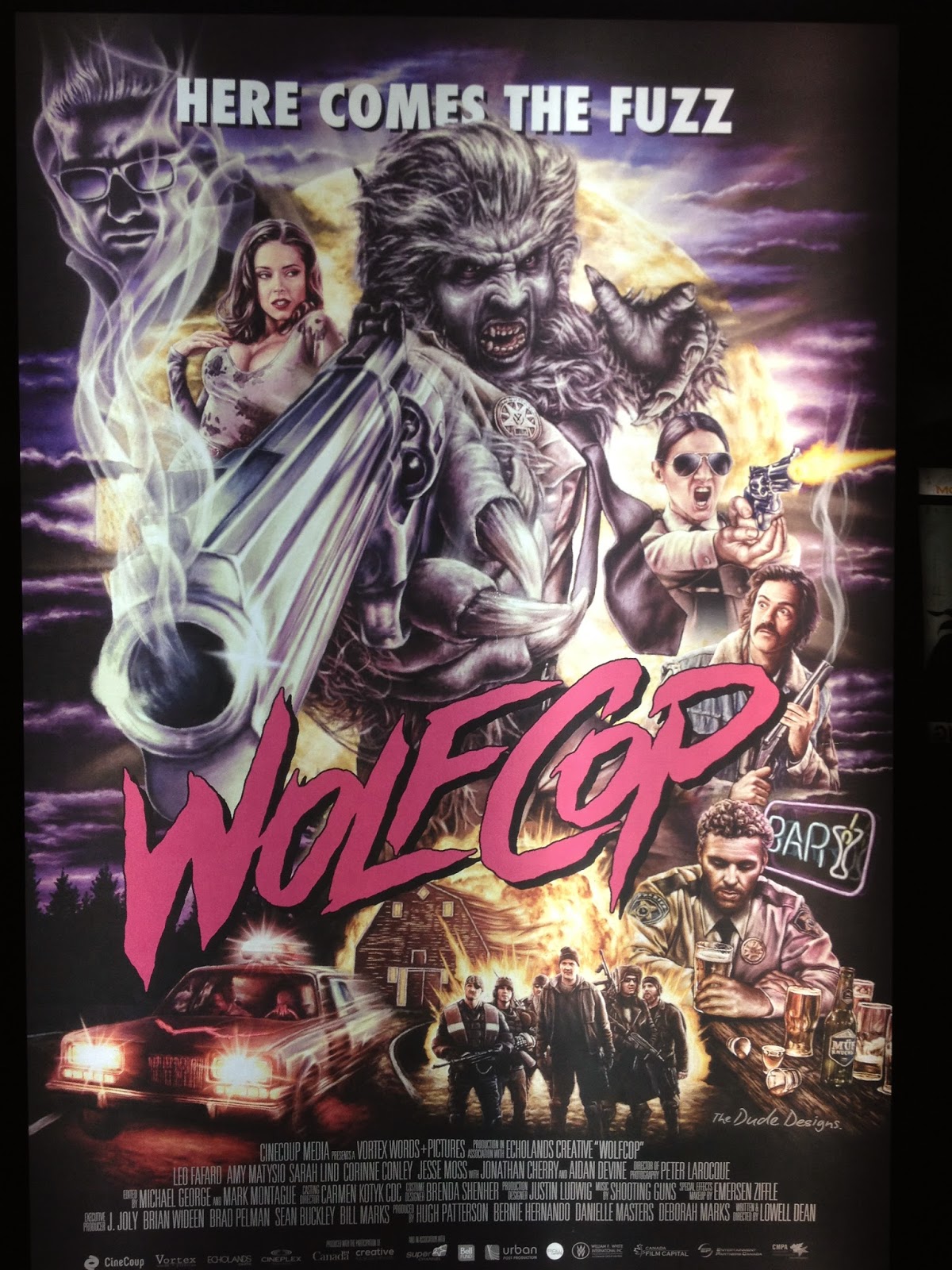 Arooo, it’s Burl, here to review a new werewolf picture for you – a low-budget lycanthropic tale called WolfCop that I just now saw in a big, if largely empty, movie theatre! Ha ha, I have to say up front that it’s always a pleasure to see a low-budget horror movie in the theatre, no matter the quality of the actual film!
I’ll tell you, I didn’t know what to expect, but I was hoping for something good, and if not good, then fun and gory! And to an extent I got what I hoped for! The picture begins with an alcoholic cop named, ahhh-ha-ha-ha, wait for it, Lou Garou, who is not just a bad cop, but probably the worst cop I’ve ever seen portrayed on film! I don’t mean he hits people with truncheons or anything, ha ha; he’s just remarkably terrible at his job!
He gets bopped on the head and ritualized in the woods somehow, and the next thing you know he’s not getting five o’clock shadow, but five-second-later shadow! And, as in other werewolf pictures, such as An American Werewolf in London just to cite one example, small dogs take a strange interest in him! But the town is meanwhile beset by many travails, including missing pets, a drugs gang, a robbery gang, mysterious occurrences of all kinds, and a mayoral election, so the newly minted wolf cop is kept very busy! All of this is very fuzzily sketched out, with some things left, or made, much more confusing than they ought to be, usually by the omission of some basic information! Frankly, it was almost as bad as Bad Meat, ha ha – but not quite, because nothing could be!
This brings us to the picture’s most pressing and dire problem: poor storytelling! Some of the character confusion is explained near the end by the introduction of shapeshifting frog people to the brew, but in general everything the movie attempts, whether it be the main narrative, the perplexing back story (something about Lou’s father, who was a cop, and the lady cop’s father, who was a bartender, and something something mysterious deaths?) or the attempt to mint a unique mythology, is scuppered by the writer-director’s dearth of storytelling skill!
There are other problems too: the lead actor, with his Danny Huston hair, is weak (though considerably better in wolf form); the staging is often inept, particularly in the action scenes; and there are too many bad lite-metal songs on the soundtrack! Ha ha! But this is not to say the picture doesn’t have its charms, because it most certainly does! The other performances range from competent to good, with a cracker moustacheman played by Jonathan Cherry a particular highlight! The trick effects by Emersen Ziffle are, in general, excellent (though the wolfcop makeup looks a little raggedy in some scenes, ha ha), and there are touches of cleverness scattered throughout the film!
But the resolution makes so little sense that even the wolfcop questions it! Ha ha! I mean, how could someone lead a drugs gang and be a police chief at the same time? Or tend bar and be a mayor? And where did the frog people come from originally, and why do some of them burst into flames when shot, and others do not?
There’s no point in asking these questions, I realize! For me there was much sublime pleasure simply in going to the movie theatre to see what Joe Bob always called the three essential Bs: blood, breasts and beasts! This picture has them all, and if the werewolf looks a little more like the one in Death Moon than the one in American Werewolf, well, no matter! I’m impressed with this picture for even existing! I’m going to give WolfCop two Liquor Donuts and urge you to check it out at your earliest convenience!
Posted by Burl at 01:10