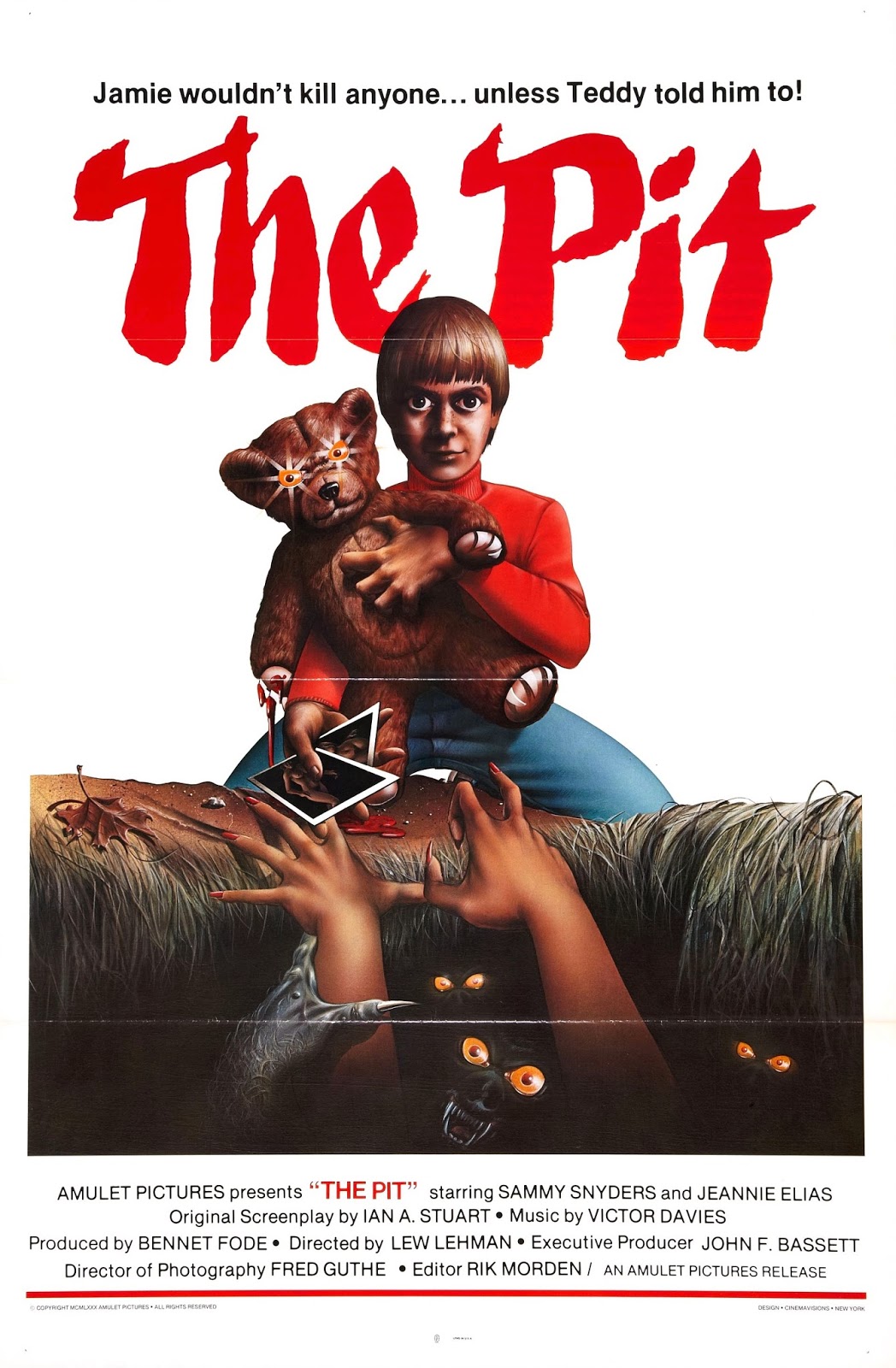 Hi, it’s Burl! Ha ha, watch out for that pit! Yes, it’s me, Burl, here both to bury and praise The Pit, that crazy tra-la-log movie from back in the early 80s! There are other tra-la-log movies, of course, but this I think is the definitive one! Sorry Joan Crawford, ha ha!
This one features Sammy Snyders – yes, Sammy Snyders, who could have been as big as Bieber – as Jamie, an oddball boy roaming about the town! Like everyone else, his parents don’t like him much, so they leave town and turn him over to the custody of a cute babysitter, Sandy! Jamie instantly falls in love and spends a lot of time either scheming to look or actually looking at Sandy with her clothes off! Ha ha, yes, he’s a little creep-kid!
Don’t forget that he’s got plenty of enemies around town, like the way-uptight librarian, Miss Livingstone, and her niece Abergail, and of course that nasty old bat Miss Oliphant! Naturally he dislikes Allan, the football hero who styles himself Sandy’s boyfriend! And free-punching Freddie, the bully, and his tutu-clad girlfriend! The rest of the townsfolk aren’t so much active enemies as people who view Jamie with simple disdain! Ha ha!
Also don’t forget that Jamie’s one good friend is his teddy, who both talks (in Jamie’s slightly-deepened voice) and swivels his head! And by garr, make sure you don’t forget that Jamie also knows of a pit in the woods within which dwell a gang of angry, red-eyed troll creatures, the tra-la-logs! Ha ha, yes, and naturally Jamie begins serving up his enemies, or those he perceives as such, to the toothy little wall hangings!
Ha ha, late – too late – in the film there’s a brief monster rampage, and that’s great, wish there was more! But the picture is still a must-see, frankly, for all sorts of crazy reasons! Old Miss Oliphant going into the pit in her wheelchair! The hectoring ghost of Sandy! The tape-recorder blackmail scene! And of course it is a film of mystery too: what is Miss Livingstone’s terrible secret, anyway, ha ha? She sure acts like she must have one! And hey, just why does Jamie’s mother wash him so much?
The key is to sit back and watch the film as you would some kind of issue-based TV movie, or maybe an Afterschool Special! That way, when the tra-la-logs start gorily ripping into someone, you’ll be surprised and delighted! Ha ha! Of course it’s not a great movie in most ways, but to me it has a lovely presence – though it is set and was I believe shot in the fall, to me it has the same summery Southern Ontario atmosphere as a picture like Funeral Home! And that’s an atmosphere I like a lot! It's not quite an Early Summer Classic, but it's a kissin' cousin to same!
I do enjoy weird movies like this, and I must say you’ll probably enjoy it too! It’s a clumsy-stupid movie about funny persons, its true, but it’s got a lot of charm and, like Sammy Snyders himself, a bizarre presence you’ll be pondering over for days! I’m going to give The Pit three glass bathroom doors!
Posted by Burl at 00:03