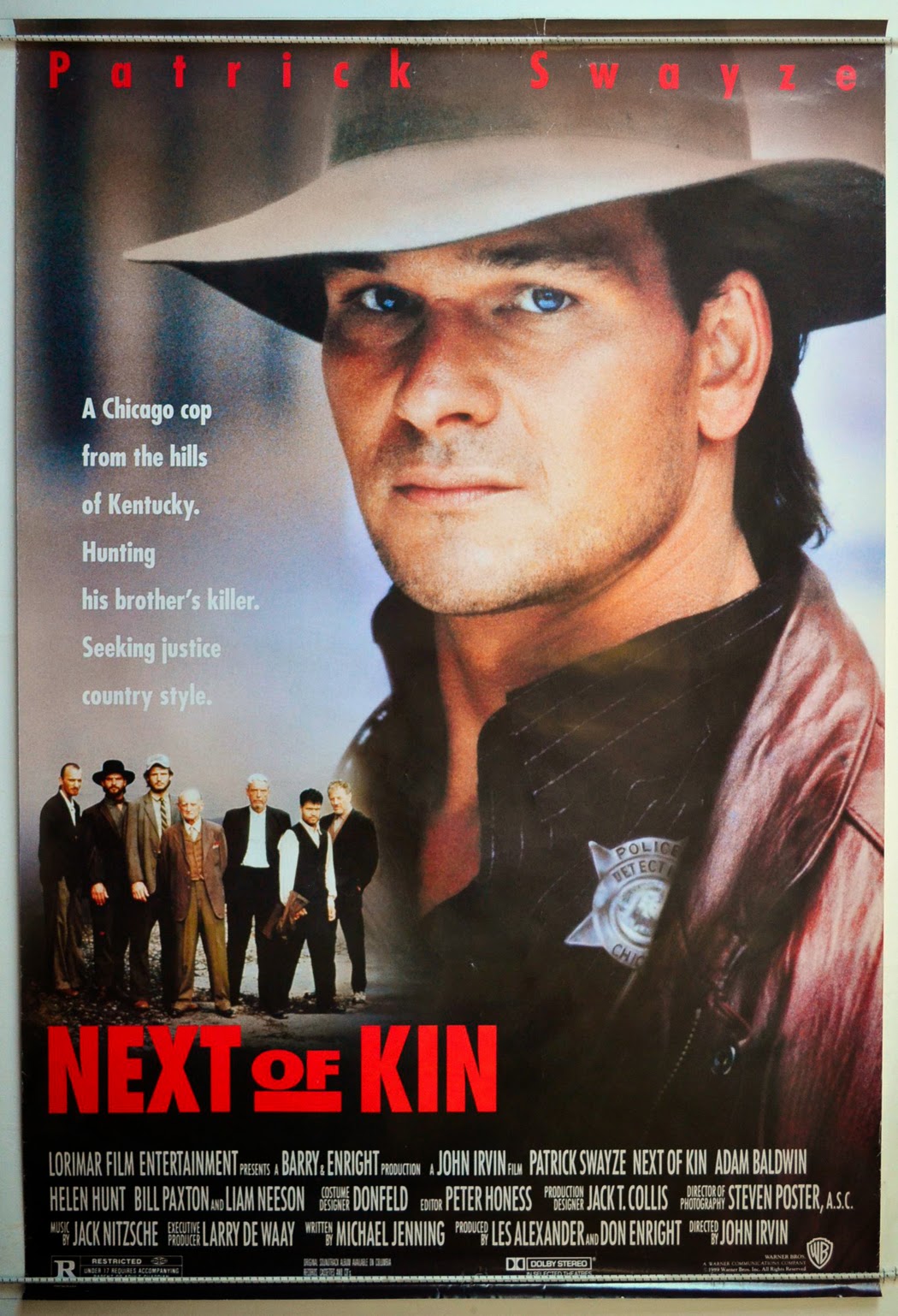 Haw haw, it’s Burl here with some hilbillysploitation! Or what should have been hillbillysploitation anyway! Yes, I’m talking about Next of Kin - no, not the Atom Egoyan picture, but that forgotten vengeance-actioner from the director of Ghost Story! This is the movie Patrick “Grandview U.S.A.” Swayze made right after Road House, and I got the idea it might have been made the way it was in reaction to that campy hübermacho bar brawl picture! It almost plays like Swayze or someone in his employ went through the script and excised anything that might be construed as camp or goofnuggets, but their own taste failed them, and they never stood back and took a look at the big, patently ridiculous picture!
I don’t mean to malign the name of Swayze—I worked on one of his movies once and he was a nice guy! And I don’t say the picture is wholly without merit – you’ll see, for example, that it has an interesting cast! The story is silly, but also kind of basic and obvious, and the whole thing has the feel of a Steven Segal flick that got a surprise upgrade from coach and is overcompensating for its new posh surroundings in a stilted, hyper-formal manner!
The picture opens with two Chicago hillbillies, Truman Gates (Swayze) and his little brother, played by Bill “Aliens” Paxton! You’ll never forget that name, Truman Gates, because they say it seventy-five-hundred times in the movie! Paxton, who works stocking and transporting vending machines with his pal David Jenkins, is popgunned in the head by a nasty Mafia bully played by Adam “Full Metal Jacket” Baldwin! Next thing you know, Briar, the oldest and biggest brother in the Gates family, played by Liam Neeson as though in preparation for pictures like Taken 2, goes on a corn-likker rampage about it all, adventuring through the Windy City and prodding his do-little brother, the film’s ostensible action star, into doing something! Their conflict climaxes in a handcuff-barfight that goes on almost as long as the one in Action U.S.A.! The head of the family is played by the same baddie from Someone To Watch Over Me, Andreas Katsulas; but is he so bad, really? His boy, whom he’s grooming for a high place in the family, and is played by a youthful Ben Stiller, certainly thinks highly of him! But Baldwin, the spurned deputy, is fuming and plotting from the margins in true Cracker Shakespeare style! Ha ha!
After a great scene where Neeson rides around on El trains, and another where he shoots up some pinball machines (which made me a bit sad!), it all ends up with a lively firefight in a graveyard! But there’s such a deficit of action here that, absent the barfight, I’d almost hesitate to call Next of Kin an action movie! But it does have that cast of worthies, including a young Helen Hunt almost straight from Trancers, and such welcome presences as Michael J. Pollard, playing a flophouse manager, Ted Levine as a bearded hillbilly, and Del Close as a consigliere!
But there’s so much mediocrity on view, so pedestrian a plot and so many terrible country songs that the balance cannot be favourable! They should have kept in all that extra Road House camp, and then we might have had something pretty memorable! As it stands, I give Next of Kin one school bus full of snakes!
Posted by Burl at 10:02