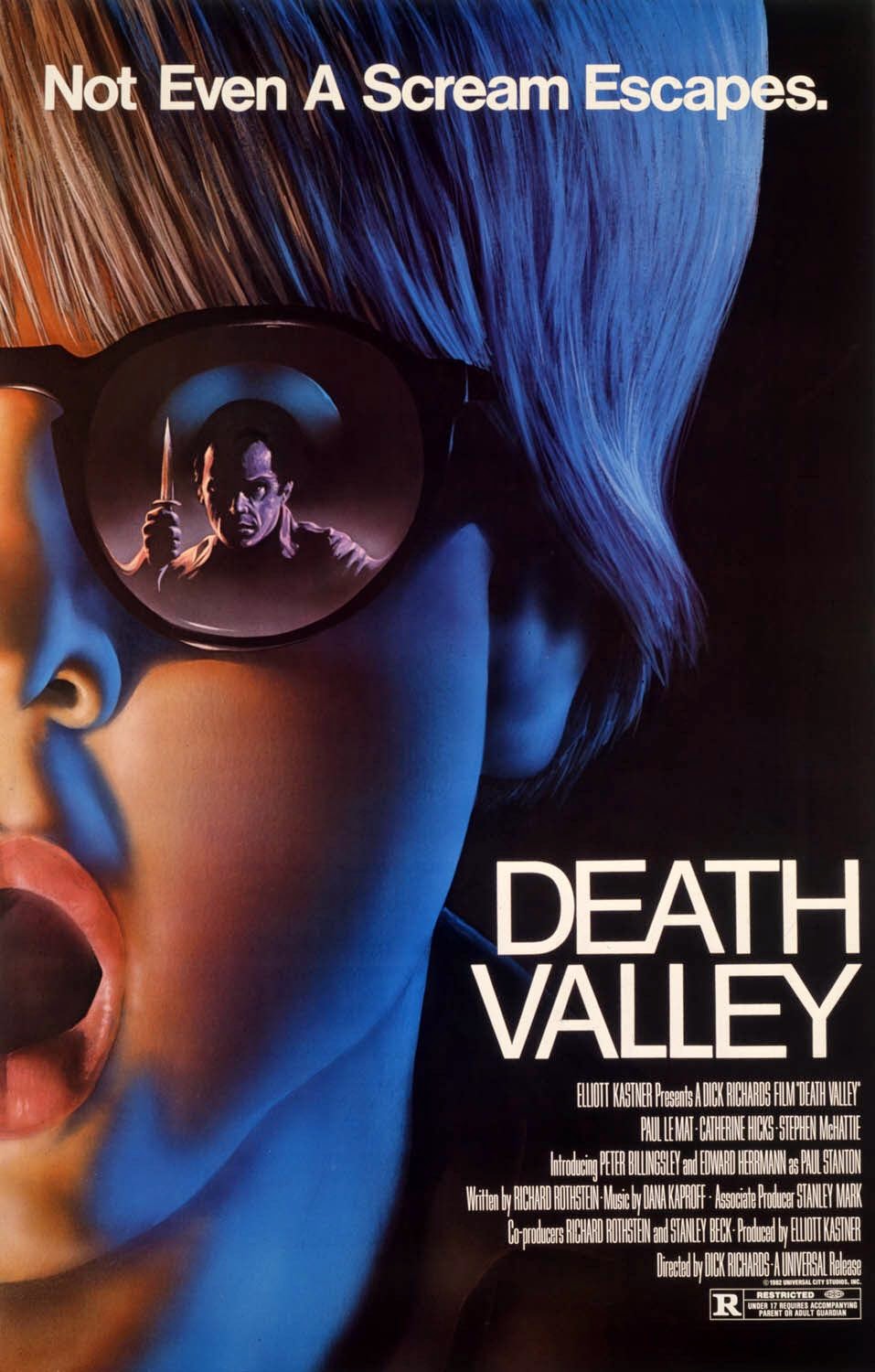 Haw haw cowpoke, it’s Burl, here to review a rootin’ tootin’ slashin’ gashin’ tale of the wild fronteer! It’s one of the high-tone maniac killer pictures of 1982, Death Valley! Now, even though I haven’t contributed to it for some time, my growing taxonomy of slasher pictures is an ongoing project, and this particular one is of the sort you’d expect everyone connected to it would prefer was called a suspense thriller, ha ha!
Oh, you know the type! There are usually a couple of name actors in there, and certainly someone visiting from the television world! Think of Happy Birthday To Me with Glenn Ford and Melissa Sue Anderson, or Visiting Hours with William Shatner and Lee Grant, or The Initiation with Vera Miles and Daphne Zuniga, or even Too Scared To Scream, with Touch Connors and Ian McShane! Not many murder scenes (except for Happy Birthday To Me), nor much blood when they do occur (the exception once again being Happy Birthday To Me), and they usually run five or ten minutes longer than a slasher movie should!
Death Valley shares many of these qualities, though at 87 minutes it isn’t too long – just feels that way sometimes, ha ha! The picture begins with a long scene of frolic between young Billy – that is, The Dirt Bike Kid himself, bespectacled Peter Billingsley from A Christmas Story – and his dad, bespectacled Edward Herrmann from The Lost Boys! Of course dad and mom are divorced, and mom, Catherine Hicks from Child’s Play that is, is taking Billy out West, back to her home country and her high school beau Mike, played by a drawling Paul LeMat, the actor well-known for his parts in Grave Secrets and Strange Invaders! (Ha ha, I always thought LeMat and Jeff Fahey must be cousins or something!)
But there’s a slasher killer about, played by a fairly young Stephen McHattie, though not so young a McHattie as we saw in Moving Violation! After taking out an RV of teenagers – a promising beginning – McHattie must hang his mchattie and wait it out with the rest of us while Billy and Mike get to know each other while mom fusses in the background! Luckily a walrus-whiskered cop played by the one and only A. Wilford Brimley (from The Thing, of course) adds some spice to things briefly, but only briefly! Ha ha, he and Scatman Crothers, and Richard Farnsworth too for that matter, could swap stories about heroics interrupted by sudden sucking chest wounds!
The rest of the picture involves western-themed stalking and chasing, then there’s some fisticuffs and some maniacs get offed, and I think one of them is impaled on a cactus! Ha ha! (That’s right, ha ha, I said maniacs – there’s two of them, just like in Just Before Dawn!)
It’s not always a very peppy picture, it’s true! Why, a good half hour or so of screen time is dedicated to showing a hefty babysitter eating snacks! And there’s lots and lots and lots of relationship stuff, scenes of friendly Mike reaching out to the young lad, with poor LeMat being wrestled to le mat each time by Billy’s apple-cheeked stoicism! The picture kind of stacks the deck against LeMat by having Edward Herrmann as Billy’s real dad – you can see he’d be hard to compete with! They clearly did that on purpose, because it successfully gives the Billy-Mike relationship a genuine, if pedestrian, arc, from which not even a scream escapes!
Even though it’s slow and uneventful, it retains the capacity to entertain! The cast is strong (semi-familiar faces like Jack “Sweater Girls” O’Leary and Mary “Weird Science” Steelsmith fill out the supporting roles), it’s got more stolid craftsmanship to it than most of these things, and the locations are nice! It’s got a little bit of tomato paste (impalings don’t you know!) and a pretty mundane story! Ha ha, altogether I’m going to give Death Valley one and a half shower caps filled with a product compote!
Posted by Burl at 01:50