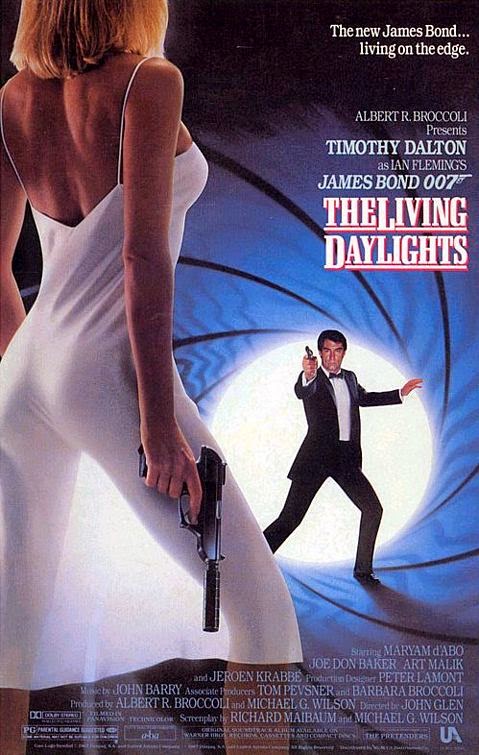 Burl here, neither shaken nor stirred at the moment, ha ha! Yes, I’m here to review a Bond picture for you: one that sits in that hazy netherworld between crazy nussbaums like You Only Live Twice and the newer, more serious pictures like Skyfall! Under discussion today is one of the two Timothy Dalton movies: The Living Daylights, which, when I began watching it just the other day, I was astonished to discover I had never seen before!
Ha ha, it’s not often you find yourself watching a Bond movie for the first time! I’m pleased to report that it was quite a good one, too! Dalton, whom we know from his work in Looney Tunes: Back In Action, made a pretty solid Bond, I think! The picture begins on Gibraltar, with an 00 exercise that goes terribly wrong when an assassin takes out two of the double-noughts before Bond turns the tables and prosecutes an exciting car chase down the precarious roads! Of course Bond sends the baddie hurtling off a cliff, then parachutes down onto the yacht of a beautiful lady, and then bam! Opening credits, one of the chintzier-looking sets in the series!
The plot is pretty weak, I’m sorry to report – there’s a plot to kill spies, some diamond smuggling, a fake defector and some shady arms dealing, and somehow all of that is connected, but just exactly how never matters much! But all the stuff surrounding that is good, like that opening scene, and the bit where a tall, murderous  blond goon played by Andreas Wisniewski of Die Hard sets off a ridiculous trap involving a killer automatic door! There’s also a great scene where the goon kills a milkman and infiltrates a rather shoddily-guarded enclave! Bond always seems to be turning up at these locations too late to do anything, ha ha!
The other baddies are a jocular general played by Jeroen Krabbé from all those Verhoeven pictures, and a crazy, war-mongering pseudo-military man essayed by the great Joe Don Baker, whom we of course remember from Fletch! The main lady is well-played by Maryam “Xtro” D’Abo, and naturally John Rhys-Davies, known from Indiana Jones and the Last Crusade, appears as a Soviet general! Felix Leiter appears, this time played by John Terry, of Full Metal Jacket and Hotwire fame, rather than by Rik Van Nutter, who was probably my favourite Leiter, ha ha! And two stalwarts appear, both I think for the last time in the Bond series: Geoffrey Keen (who was in Moonraker, among others) and Walter Gotell, whom we may recall from Endless Night as well as many Bonds!
As I say, Dalton makes a fair Bond, though he doesn’t exhibit much of a personality! He gets a few quips and displays emotions, but little of it sticks! I’m inclined to think this is less Dalton’s fault than a simple lack of chemistry between him and the house style he’s meant to be a part of! But at the same time, he’s a better JB than Roger Moore, at least for my money!
It was an enjoyable picture, and all the more for me because I’d not seen it before! Certainly it was a major step up from A View To A Kill and Octopussy and the other nonsense movies that immediately preceded it! I call The Living Daylights enjoyable, and I give it two and a half rage-popped balloons!
Posted by Burl at 15:04