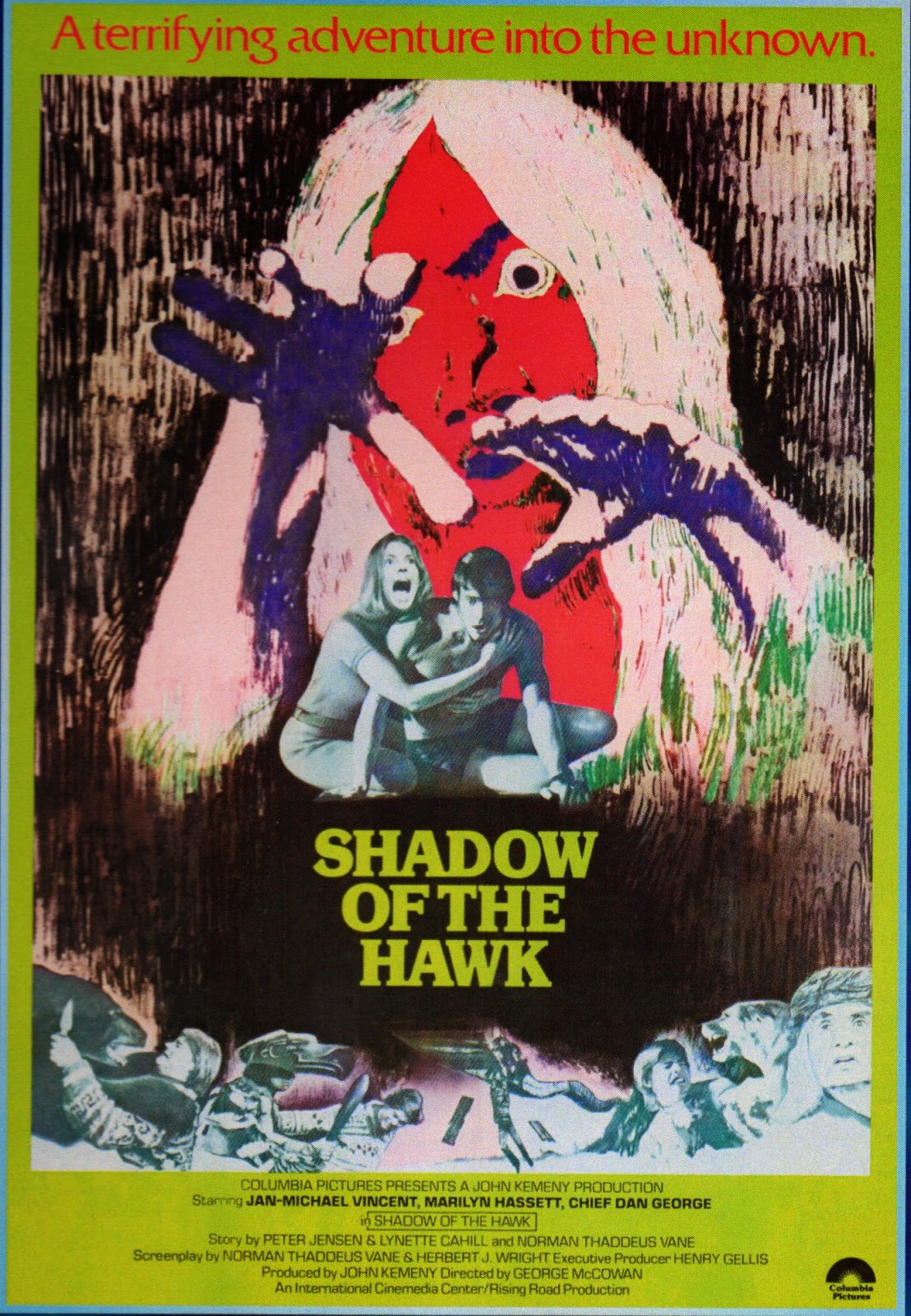 Lu-lu-lu-lu, it’s Burl, here to review a spookshow from the 70s! Ha ha, this is certainly not the first time I’ve done so, and it’s not likely to be the last! Today’s motion picture is called Shadow of the Hawk, and it’s a relatively rare one! I’d certainly never seen it before, and I’m supposed to be an expert in this kind of thing!
I’ll tell you the plot if you’d like! Young Mike, played by Jan-Michael Vincent of Damnation Alley and Enemy Territory, is a Vancouver businessman who enjoys throwing parties and swimming in pools with his ladyfriend! But at the same time he’s being plagued by strange visions: a terrible masked figure seems to be stalking him, showing up outside his condominium window (this scene is extremely similar to, and as effective as, and predates, remember, the one in ‘Salem’s Lot!) or in the water of his pool! Meanwhile, Mike’s grandpappy Old Man Hawk, a medicine man from a community somewhere far out of town, is making the long journey by foot into the city to see his grandson! Along the way he meets Maureen, a nosy-parker journalist, who somehow ends up coming along for the rest of the adventure, and having some encounters with the mask herself!
Of course Old Man Hawk is played by Chief Dan George, and very well too I might add! He needs Mike to help him take care of a nasty ghost witch who’s hexing and poxing and whammying the community with her clown magic! Ha ha! And of course Old Man Hawk has to work pretty hard to convince Mike and Maureen that any of this is true!
Most of the movie involves the trip back to the community, which is complicated by the evil influence of the witch! She has some minions who travel by car until Old Man Hawk puts a stop to them by use of an invisible wall! Ha ha, it’s a terrific sequence, with some daring stunt work by the much-maligned J-M Vincent!
In fact the movie contains a fair bit of daring stunt work, particularly in a scene where a rope bridge is swung crazily about by witchy forces! There's also an impressive bear fight and some great jeep driving! The movie looks good too, and – a bit of trivia for you movie credit nerds, ha ha – even though the picture lists two cinematographers in the opening credits, it was actually shot by two completely different ones who get no credit at all, namely Richard “The Dunwich Horror” Glouner and Philip “Deadly Friend” Lathrop!
The picture’s climax involves shambling, zombie-like figures and a shapeshifter as well as the ghost-witch, so it really works hard to tick off the horror boxes, ha ha! It’s not by any stretch a great or particularly effective movie (though it has some great moments), but it’s a comfortably enjoyable picture, and remarkably seamless given its troubled, complicated production history! I liked it, and I give Shadow of the Hawk three magic powder lines across the road!
Posted by Burl at 13:24