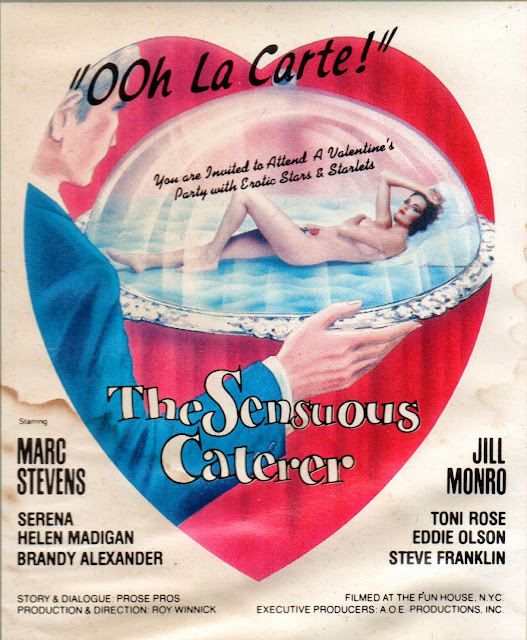 Pieww-pieww-pieww, it’s Burl, disco dancing into the room to do another review for you! Ha ha, this one is of a picture called The Sensuous Caterer, and it sure is an odd one! Sit down on this heart-shaped couch and I’ll tell you all about it!
It seems there’s a very New York fellow called Marc Stevens who wants the greatest Valentine’s Day shindig ever! So he’s turned to an organization, or rather, a cowboy-hatted man, called The Sensuous Caterer to organize this once-in-a-lifetime bash! And ha ha, what a party they’ve put together for the perpetually amazed Marc!
That’s the plot in a nutshell! The twist is that Marc appears to be some kind of an adult film star – his name, I confess, was unknown to me before sitting down to view this production – and many of his guests are as well! And they sure look it, ha ha! Of course Tiny Tim and a lady companion (Miss Vicki, maybe?) appear in one scene, so I guess not everybody there was in the business!
The first thing you notice when the movie starts is that it was shot on 1980-era video and so looks like it might itself be a pornoo, ha ha! And maybe at one time it was, but it’s been disco-edited into a mishmash where you occasionally will glimpse a nude person, but there’s no actual sex! And that was fine with ol’ Burl, as pornoo is not really my genre of choice – though if I really am going to review all the movies, I guess I’d better start watching them!
The next thing you notice is that, in all the scenes of Marc talking with The Sensuous Caterer, you never see the latter’s face, only his big cowboy hat! Why they leave his appearance a mystery is one of the picture’s greatest mysteries, in fact! The Caterer tells Marc all about the many wonders he’ll experience at his party and how much all the guests will like it! Marc himself seems very gay, but is constantly enthusing about the fabulous women in attendance!
There are also scenes of an adult magician performing sex-themed magic tricks, and little intermezzos in which Marc converses with a Mae West puppet which I at first took to be Madame! In vain I sought Wayland Flowers! And promptly, the puppet attempts to seduce Marc with leering ribaldery! And then there are many scenes of disco dancing and incredibly drawn-out burlesque acts! Ha ha, there’s once scene with Marc and a lady doing a lightsaber dance to a song about space love! It’s all crazy!
By the end of this epic rumbustification, Marc is completely spent, and there’s a real party’s-over ambiance to the picture’s denoument! It’s especially poignant given that the community on view throughout the movie, though they know it not, is about to be blindsided and decimated by the terrible plague of A.I.D.S.! Marc himself was a victim later on, and I’m sure many of the people we see partying it up without a care would later be tragically affected by the disease! So amid all the gyrating and coloured lights and pulsing beats and random hilarity, there’s a deep and abiding melancholy!
But on the other hand, it’s a party, and one of the greatest late-70s time capsules I’ve ever seen! Forget about Saturday Night Fever, ha ha, The Sensuous Caterer, thanks to its insider access and unforgiving video, is where it’s at! There’s not much of a story, and the dance numbers are highly zoomable, and the jokes mostly aren’t funny, but there’s a rough and innocent charm to the whole affair that makes it likeable! As a “before” snapshot of New York’s underground sexual community, it’s invaluable! I give The Sensuous Caterer two issues of Harvey magazine!
Posted by Burl at 23:42