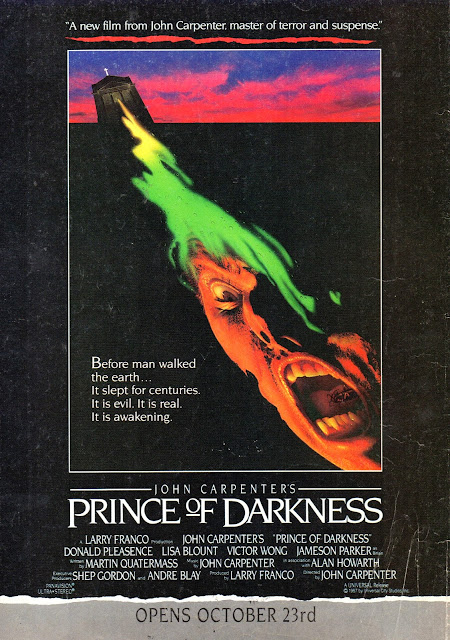 This is not a dream! It’s Burl! Ha ha, yes, I’m here to review a fine October spookshow, John “Halloween” Carpenter’s return to the small scale, Prince of Darkness! This is the picture he made after the unfair box-office flubup of the delightful Big Trouble in Little China, which is a movie so ridiculously entertaining that when ol’ Burl and a friend went to see it in the theatre, on its conclusion we just looked at one another and wordlessly settled back into our seats to watch it again right away!
I saw Prince of Darkness in the theatre too, but may have had to sneak in because it was rated R, for super-silliness perhaps! Ha ha! The picture is Carpenter’s tribute to Nigel Kneale’s Quatermass pictures, because I guess Halloween III, which Kneale actually wrote (before it was changed around a lot and he had his name taken off) didn’t quite work out that way! Carpenter wrote the script for this one himself, but took the credit “Martin Quatermass!” Ha ha, subtle!
The story has a priest, played of course by Donald “You Only Live Twice” Pleasance, discovering that a little-known Catholic sect has kept the devil trapped in a carboy in a downtown Los Angeles church! Ha ha, you can imagine his surprise! The devil is in liquid form, and for no particular reason has begun seeping out of his bottle! Naturally the next step is to recruit an eccentric physics professor and a number of postgraduate students, and have them camp out in the church to ponder on the problem!
Much of the first half of the picture is the students scoffing loudly at their situation and proclaiming it “bullshit”! It seems a preemptive stratagem on Carpenter’s part, frankly! But when they start having crazy dreams that prove in fact to be messages from a demonically-plagued future (the messages come from “the year one-nine-nine-fzzzt!”), the Kneality kicks in! Ha ha, that’s the scariest part right there, those dreams!
It comes down to a lot of running around the church (almost all the movie is set there) and fighting with possessed grad students! The movie presages the [Rec] series of pictures by conflating demonic possession with zombieism, though these particular possessed zombies aren’t as scary as they should be! Ha ha, they’re not scary at all, really, though I did like the one who stands in the parking lot calling out warnings before he disintegrates into a pile of bugs!
Almost nothing makes much sense, but that’s not a problem, at least not to ol’ Burl! I’ve always liked this picture, flawed as it is, and I fear I won’t be able to make a very lucid case for why you should see it! I just like it! I like the cast, or some of it at least, like Pleasance and Victor Wong as the physicist, and the ponky, mustached guy who plays the lead! And Dennis Dun is always good too, ha ha! I like the climax, in which Pleasance is trapped in a closet longer than R. Kelly ever was, and in which we are given some genuinely eerie imagery!
I never thought of this as a gory picture, but it does have a few heads and hands coming off, and some impalements and suchlike! Ha ha, the glasses nerd from Riptide and The Horror Show even gets turned into a living bike by Alice Cooper! Say what you like about this movie, but you’re never going to see a scene like that anywhere else! I don’t mind being a cheerleader for the film, because I figure someone has to be, and so I’m going to give Prince of Darkness three ant-filled TV sets!
Posted by Burl at 14:54

Email ThisBlogThis!Share to TwitterShare to FacebookShare to Pinterest
Labels: 1980s, Carpenter, horror, saw it on the big screen, supernatural, zombie