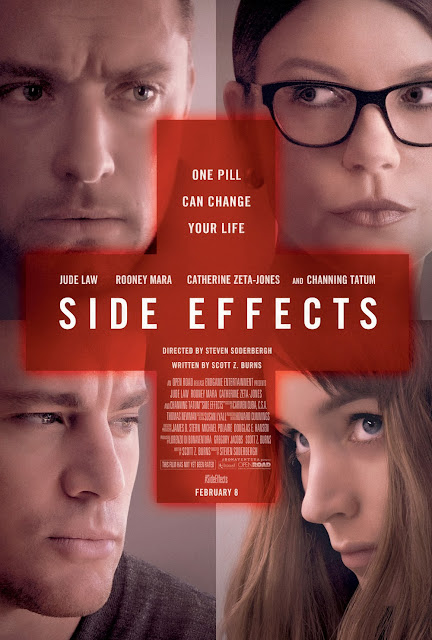 Burl here, writing you a prescription… for murder! Ha ha, I’m here to review Side Effects, the Steven Soderbergh picture which he claims will be his last theatrical release! That Liberace picture was supposed to be a theatrical release, I understand, but it was a TV release instead, ha ha!
It’s already been said in other reviews, but the greatest twist in this unexpectedly twisty picture is that it’s not the genre you expect it to be, and continue to expect it to be even by nearly the halfway point! No earnest study of modern-day pill-popping this, but a patsy-man film noir in the vein of Double Indemnity! And ha ha, if you haven’t seen it and plan to, you may wish to skip the rest of this review, because I’ll probably give something away!
It’s not a “big twist” picture or anything, just a slight genre exercise that’s more enjoyable when you go in expecting something else! The story concerns a young wife, Rooney Mara, whose husband Charleston is just getting out of the pokey, where he was tossed by the effa-bee-eye for investment crimes! She suffers from bouts of suicidal depression and gets both worse and better when her mind doctor, Jude Law, gives her a new type of  pill!
But soon: tragedy! Ha ha, she’s cutting up a red pepper in her sleep one night when she turns and puts a vicious poking on poor Charleston! After that her previous mind doctor, a funny caricature of a horn-rimmed lesbian played by Catherine Zeta Jones, gets in on the action! Jude Law is placed in a precarious position, one so time-consuming he hardly gets a chance to shave, and it’s only his dogged investigations in the face of scorn and bewilderment from his family and peers and the unraveling of both his personal and professional life that finally saves the day!
Well, all of this is handled and told in a ruthlessly professional fashion by a director who knows very well what he’s doing! I always like Soderbergh’s genre pictures, and I think my favourite of his might still be The Limey, which I think is the last movie he made before deciding for whatever reason to become his own cinematographer! (No, on looking it up that was his next picture, Erin Brockovich!) Ha ha, cinematographers spend most of their time talking to gaffers and key grips, so I’m not sure exactly how you do that while you should be working with actors! Of course, he uses some pretty fair actors, ha ha, so he probably doesn’t have to tell them much! On the other hand you have Peter Hyams, sort of the flipside Soderbergh; and how did he direct Arnold, who probably needs lots of care, in the terrible End of Days while lighting his set at the same time? Ha ha, I can barely imagine it!
Anyway, Side Effects is a thoroughly polished production in almost every respect! It really hits some strange olden days notes though, when it turns out not only that the predatory lesbians are behind the whole thing, but that the straight white guy saves the day and the family unit, including the unpleasant wife, is restored! It’s clearly Soderbergh trying to mess with us, and that, as I said, is his greatest trick of all!
For that, and the director’s willingness to risk the “Oh, the movie’s over now… and why did I care about what was going to happen at the end?” feeling that such an ancient, corn-fed stratagem can invite, I give Side Effects two and a half hat tips to Psycho!
Posted by Burl at 23:38