Burl reviews Guess What We Learned In School Today?! (1970) 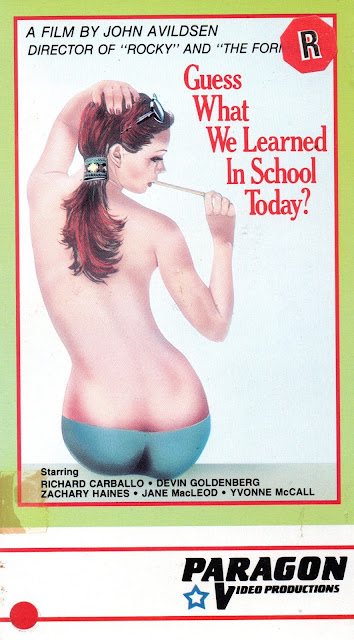 Hi, Burl here to raise your consciousness about a peculiar movie of yesteryear! Ha ha, the picture’s called Guess What We Learned In School Today?, and it’s a very early effort from John G. "For Keeps" Avildson, made just before he hit the medium time with Joe, and later the big time with Rocky!
I guess this was an attempt to make a timely picture, a turned-on trip about the youth of today, today, today! But it’s so crazy that I don’t think it ever would have seemed the least bit relevant! Central to the story are two families, one headed by a grumpy, bearded bear of a policeman, whose righteous mission in life is to stamp out all filth and depravity! Of course he’s a closet case as well, and is eventually awakened to that fact by the ministrations of a sassy black man-lady!
The policeman has a beautiful wife who is always next door getting stoned with the neighbours, who are the other main family in the film! The wife, a redhead, is married to an impotent colonel, and their son is Robbie, who acts about five years younger than he’s supposed to be! (Ha ha, the actor, meanwhile, is about five years older than Robbie is supposed to be – it’s pretty confusing! And that very same actor would later write the script for The Happy Hooker Goes Hollywood! Whew!)
And down the road is some sort of educational institute where children are taught about married persons' panky, and other people stand around naked in a swimming pool! The place is run by a matronly lady, Dr. Lilly Whitehorn, who becomes the bête noir of the cop and the colonel! Ha ha, they think she’s corrupting everyone with her free thinking ways!
The movie bounces around between domestic farce, attempts at being sexy (though it never once is!), loopy 1970-era comedy and, toward the end, imagined acts of horrible violence! But love and sex and common sense win out in the end, and the two uptight citizens learn the error of their ways! At least I think they do – the movie made me pretty sleepy, ha ha!
It’s mostly people chattering away at one another, never really getting anywhere! Ladies do take off their clothes now and again, though by some sorcery the movie manages to drain this sight of any prurient interest! (We also see a good deal of The Colonel in dishabille!) The two male leads seem at first like goofy strawmen, but of course there really are people like this out there, John Birchers and whatnot – very easy targets, it ought to be said! Still, they’re a cartoony couple of fellows, even when the cop is conducting blatantly underhanded sting operations! Ha ha, he eventually gets busted in a twist I certainly didn’t see coming!
The acting in this picture, with a few exceptions, was a lot better than I’d supposed it would be! It’s too bad this solid thesping wasn’t in the service of something a little more hard-hitting! But I do give it points for being an artifact of its time, even if not a particularly enlightening one, and for its enthusiastically pro-sex stance! I’m going to give Guess What We Learned In School Today one and a half stammering mailmen!
Posted by Burl at 22:51