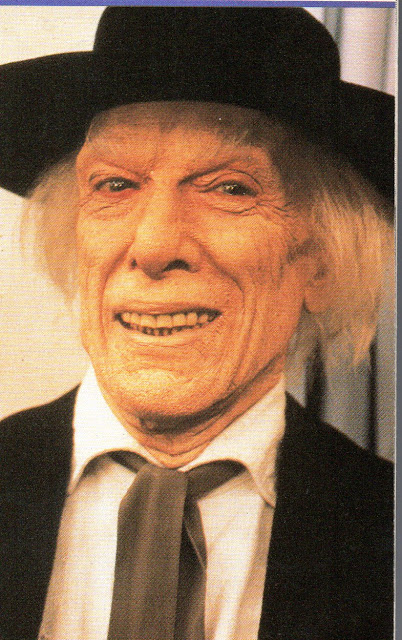 Triple boo, it’s Burl! Ha ha, yes, it’s me, here to review a threequel! It’s Poltergeist III, the third and last in the series of ghost-popper movies that began way, way back in the summer of 1982! I saw Poltergeist in the theatre, and then in 1986 I ponied up for Poltergeist II; but by the time the third one came around in 1988, I couldn’t be bothered - until now! Ha ha, it was sort of the same thing with Robocop III, which, like this movie, features the acting of Nancy Allen, and which I'll review for you some day soon!
Ha ha, so where’s JoBeth Williams and the Coach? A.W.O.L., that’s where! Almost nobody who was involved with the first two pictures had a hand in this one, in front of the camera or behind, and even the location is vastly different! Ha ha, no Southwestern suburban dwellings here, but a tall Chicago skyscraper! (Yes, this is another high-rise picture, just like Gremlins 2, Dredd and Enemy Territory!)
It seems that Carol Anne, the little girl of the Freeling family and for some reason the locus of the ghostly interest, has been adopted into her aunt Nancy Allen’s family, which is made up of Allen, her greying spikehair husband Tom “Big Bad Mama” Skerritt, and Skerritt’s daughter Lara Flynn Boyle! No one can say why the Freelings, who several times have risked their lives and souls to save Carol Anne, would so easily give her up to relatives living in a distant city, but that’s the situation we’re faced with in the opening reel of the picture! We also learn that she goes to a special school for special children which is run by the guy who wrote Henry: Portrait of a Serial Killer! Ha ha, what kind of school is that!
Pretty soon there are some appearances from that spooky reverend who was in the second picture! He’s not very scary here though, and the actor who plays him does okay, but he's no Julian Beck! It may not be his fault that he isn't scary, because nothing else in the picture is scary either! The building is getting very cold, which I suppose might be scary if you lived there, ha ha, and weird things are happening in the mirrors! The mirror trickery isn’t scary, but it certainly is quite ingenious!
Ha ha, and it’s here I should mention that another big difference with this movie is that it has none of the ghostly optical tendrils or cloud-tank thunderheads of the first two! All the trick effects here were done in camera, which mostly means they cranked up the old fog machines! You might think that would somehow help make the movie a more relatable, realistic experience, but actually it makes the thing seem like a high school play! The mirror effects are pretty neat, as I said, and the trick makeup is funny! Ha ha, there’s nothing as gruesome as the torn-off face in the first picture, but there is a scene where that little midget lady becomes a desiccated husk, then she busts open and Lara Flynn Boyle comes crawling out covered in cornflakes! Ha ha, gross!

It was one of those troubled productions, I hear, and not only because the little girl very sadly passed away just before the picture wrapped! There was all sorts of confusion, new endings were reportedly shot, and the end result is kind of bland and silly, with terrible dialogue and mostly indifferent acting, especially from Nancy Allen! It’s too bad, because the potential was there – the director, Gary Sherman, did a couple of horror pictures I quite admire: Raw Meat and Dead & Buried! But whatever he brought to those fine efforts, he left at home for this one! I’m going to give Poltergeist III one single hagface!