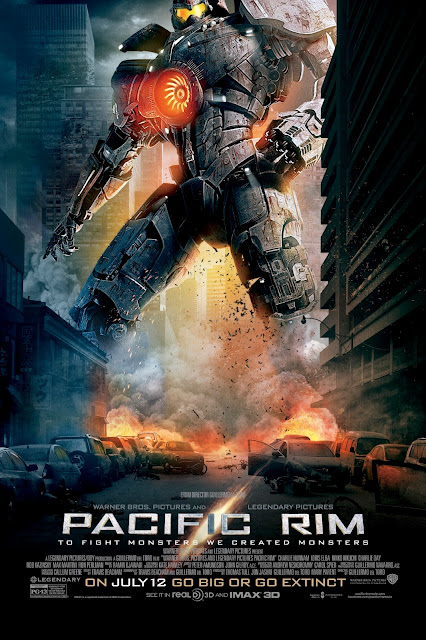 Burl here, monstermaniacs! Ha ha, it’s time to review a giant monster movie in the style of War of the Gargantuas! This picture is a little vaster in scale than the gargantua movie though, and the plot is a bit different! The movie is called Pacific Rim, and it was only one of many big Hollywood epics released in the summer of 2013 that didn’t do as well as studio executives were hoping!
Certainly a lot of samoleans were spent on this one! It’s the story of giant monsters emerging from an interdimensional rift in the bottom of the sea and causing havoc along the world’s coastal regions! In fact, the bog critters, named kaiju by the peoples of the earth, seem to be zeroing in on big cities! They are not seen actually munching on people like in the gargantua picture, but if you get in their way, watch out! They’ll step on you as soon as look at you, ha ha!
Well, clearly humankind has no option but to build giant robots to combat these varmints! And though there are human-scaled conflicts in the picture as well – some involving a pair of glasses nerds, some concerning the pilots of these big robots, or their commanders – it really just comes down to many scenes of giant robots fighting giant monsters!
That’s probably as it should be, and take note that the trick effects are very well done, but these battle scenes do tend to get repetitive after a while, and even a bit boring! Still, because the director is the portly Mexican, Guillermo del Toro, all of this is handled with as much style and personality as can be injected into the sort of movie usually made by committee, and intended to appeal to the broadest audience possible!
Plus, unlike other recent giant robot pictures, Pacific Rim energetically celebrates the virtues of collective action! For this reason I remain fond of the picture, even as its flaws and inconsistencies mount in the recollection! The script is really, really dreadful, and the illogistics of using robots will dog the viewer even as the picture unspools – why, for instance, not at least back up the robots with jet planes, or just use drones to attack the beasts and not robots at all – but the idea of humankind forgetting their differences and getting together to build these big threepios is just so charming that you can’t help but cheer them on! And the robots require two pilots acting in concert to operate them, which underlines the theme nicely on a smaller scale!


And who, finally, can dislike a giant monster movie? Not ol’ Burl! I enjoyed the picture while it was on, and will happily go see the H.P. Lovecraft picture del Toro wants to make if he ever gets the chance to do it! In the meantime, I’m going to give Pacific Rim two Eurythmics, who were the 80s pop duo apparently recruited to pilot the Russian robot! Too bad for you, Pet Shop Boys, ha ha! Maybe next time!
Posted by Burl at 11:29