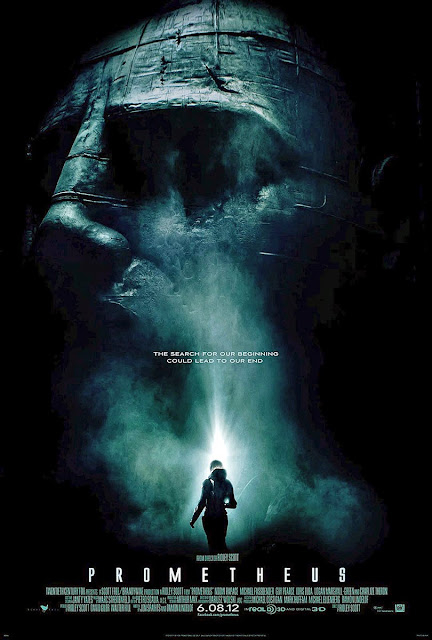 Hi, Burl here with a review of a brand-new movie! It’s a prequel to Alien, which is a movie ol’ Burl is pretty fond of, and it addresses what to me was always one of the central questions of the original film: just who was that big guy in the chair, and what was his story? Ha ha! He was known as the Space Jockey, and it was always assumed that he and his race were just another bunch of hapless arrivistes on that desolate planet where the green eggs roamed! But there’s more to his story, or so Mister Ridley Scott would have us believe!
It seems that a couple of scientists have discovered some cave-painting indications that we ought to go to a certain planet and check it out! They happen to land exactly where the action is on this planet – don’t ask me how – and the next thing you know they’re checking out some caves as though they were characters in an early-80s Alien rip-off, like Horror Planet or Galaxy of Terror or something of that nature! Boy, they sure do spend a lot of time in those caves!
All of this takes place in a world that’s just as grey and bottle-green as you might imagine, so drained of colour that even the Rubik’s Cubes are monochromatic! The scientists and spaceship crew are not very interesting people on the whole, with none of the “we’re just doing a job” resignation seen in the Alien or even Aliens crew members - even though several times in Prometheus the characters explicitly talk about how they're just on the ship doing a job for the paycheque! What they need is Harry Dean Stanton and Yaphet Kotto on board, grousing to beat the band!

I couldn’t even figure out if the people of this future time (the year 2093, that is) had ever yet met aliens, or if their encounters with them in this movie represented a big first! Remember in Aliens when Hudson asks “Ha ha, is this just another bug hunt?” Right there in one line you knew that they were already familiar with aliens, but that humans were just a bunch of imperialistic jerks who would sooner fire their plasma rifles at an E.T. than get to know it!
But here we haven’t really got a clue how incredible this is all supposed to be! It's treated as pretty routine for the most part! There’s an old man along for the ride, or maybe a young man with putty all over his face, it was hard to tell; but he at least seemed pretty impressed with the alien contact! And there are a few different aliens who show up, some humanoid and others more tentacle-based! I won’t give too much away, but we do indeed see some thrashing tentacles in this picture! Ha ha, a part I didn’t quite understand was why the one fellow became a psycho zombie! That just happened so there could be an extra action scene I think, and also so we could get rid of some of these characters whose names we never even heard! In Aliens, even Wierzbowski was named for us before his untimely demise!
I will say this: I liked the robot in Prometheus! The robot was a good actor, and his love of Lawrence of Arabia was a nice touch! The captain was a pretty good guy too! Ha ha, I would have done just like him and straight up asked that Charlize Theron if she was a robot too or what! I won’t give away the answer here though, ha ha!
The movie reminded me of Forbidden World in many ways if you want the truth, and you can take that however you like! But I will say that, in spite of the unbelievably sketchy characterizations, no matter that the thing falls apart logically at the slightest rational thought (the Space Jockey doesn’t even end up in the spot where he’s later found by the Alien crew, ha ha!), and forget about the fact that the musical score keeps threatening to become the Star Trek fanfare, this picture has some really enjoyable aspects!
It looks great, it sounds great and it has a gloomy atmosphere I thought was nicely antithetical to blockbuster summer success! I like that it tries to philosophize a bit, even if nonsensically! It’s a thinking man’s movie as made by morons, but at least it tries to be something other than An Efficient Thrill Machine! It’s a funny movie: the more I think about it, the more I liked it! It’s no Alien, but it doesn’t embarrass its host either, and when it comes bursting out from the 1979 picture’s gut this summer, everyone involved can stand tall and proud! I give Prometheus two and a half alien bongos!
Posted by Burl at 23:20