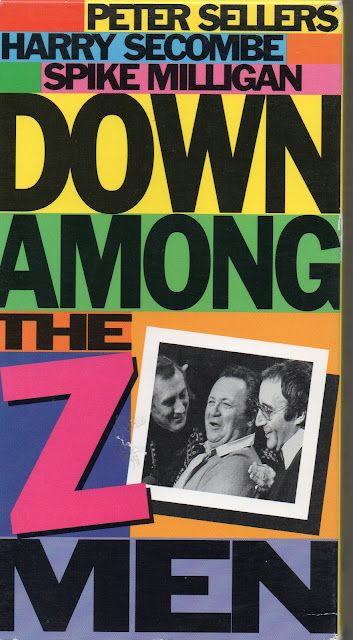 Stumbling over a divan, calling out through my thick beard and goggle glasses – it’s Burl! Ha ha, hi there friends! Yes, it’s me with a new review for you! It’s an old British comedy picture called Down Among the Z Men, and apparently it’s the only feature-length movie ever made by the legendary Goons!
Some of you may not know of the Goons, but it was Peter Sellers, Harry Secombe, Spike Milligan and (at first) Michael Bentine, and they all had a radio show that they did on the BBC in the 1950s! But early in the radio show’s popular run they made this picture, which I guess wasn’t a barn-burner at the box office since there weren’t any more movies afterwards! Maybe they said all they wanted to say on the silver screen with this one effort, ha ha!
For all you American readers, by the way, it’s Down Among the ZED Men, not Zee Men, so when you’re saying the title in your head, remember to pronounce it correctly! The story takes place in a small British town with an army base on it! A citizen of the town, Harry, is a draper’s assistant with dreams of becoming a big-time Scotland Yard detective! He styles himself “Bats of the Yard” and is soon in contact with some criminals who want to steal a secret laughing/tear gas formula from a nutty professor!
Somehow Bats ends up in dutch with his boss and the police, and to get away from them he joins the army, where he’s Down Among the Z Men I suppose (though I never did figure out what that meant), and this gives the movie a chance to bring in such beloved stereotypes as the blustery Sergeant major, the dimwitted Major (played by Sellers!) and the incompetent Private who talks like a limey Mr. Ed! There’s also a squad of pre*ty ladies who I guess were a dance troupe in real life, because they certainly had the moves! The nutty professor is on the base and soon the criminals are too, and the whole slapstick affair comes to a frantic climax during the big variety show!
Ha ha, I’ve long been a lover of fine British comedy, but despite the talent involved, I’ve never been a big fan of the Goons! I haven’t experienced them much, it’s true, but I will say that this motion picture iteration of their routines did not bring m into the fold! It’s got some moments, that’s for sure, but ultimately it’s like a slightly wittier and more intelligent version of a Poverty Row comedy programmer! And when I say slightly, by garr that’s just what I mean! There’s a lot of funny voices, absurd costumes (on the professor, mainly) and falling over ottomen and daybeds! And it’s all pretty low-rent!
Ha ha, I guess as a trip down memory lane for those who were fans of the radio programme, this would do the trick! For Sellers or Milligan completists, it’s a must of course! But for all the rest of us, I give it one and a half Bats of the Yard!
Posted by Burl at 11:27