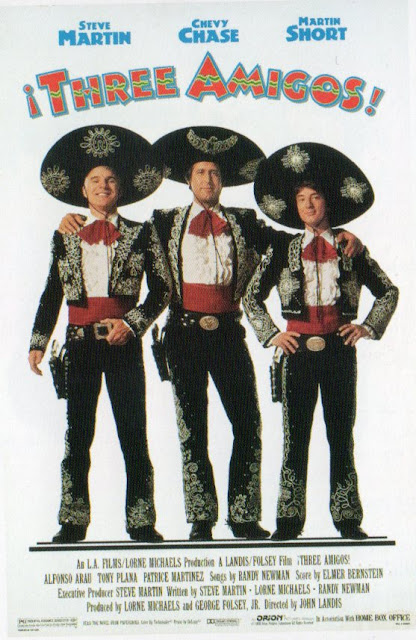 ¡Hola, it’s Burl, here with another film review for you, my good good friends! This picture is in the subgenre of the comedy Western, and before you can say “Ha ha, Burl, why are you reviewing Rustler’s Rhapsody?” I’d like to assure you that I’m not! Nor am I having a go at Cat Ballou or Support Your Local Sheriff! No, this is a movie directly from the mid-80s, and it was made by none other than John Landis!
Ha ha, it’s safe to say I like me a John Landis picture, even some of the stinkier ones! ¡Three Amigos! is probably one of those, I’m sorry to report; but it still has its passle of small pleasures! It seems to me that I used to think much more highly of this movie, but now when I watch it, as I did the other day, all I can see is its unrealized potential! Well, that and the funny bits I’ve already alluded to! The singing bush is of course one of these, but more on him later!

The story is a pretty solid one: in the early days of Hollywood, three movie caballeros get tossed out on their ke*sters by studio boss Joe Mantegna! They get an invitation from some besieged villagers, who believe them to be true heroes, to come and rid their lands of the dreaded El Guapo; the Amigos, of course, think they’re just going to put on a show! Misunderstanding piles upon misunderstanding, and the Amigos prove themselves pusillanimous hangdogs once they find out it’s for real! But ultimately, of course, there is redemption, though not found in a hail of hot lead as in The Wild Bunch!
With Steve Martin (from All Of Me) as Lucky Day, Chevy Chase (from Fletch) as Dusty Bottoms and Martin Short (from Innerspace) as Ned Nederlander, you’d think this would all be comedy gold dust, but you can feel the dust blowing away in the wind just like at the end of Treasure of the Sierra Madre! And not even Walter Huston would laugh and dance a hornpipe at most of the goings-on here! Everyone concerned with the picture, with the exceptions of Randy Newman, who wrote the songs, and John "An American Werewolf in London" Landis’s wife Deborah Nadoolman, who designed the costumes, was kind of operating on autopilot when they made this one!
Complexity seems a strange thing to ask for in a mid-80s comedy, I realize, but I was just wishing there was a little more to this thing: more nuance to the inter-Amigo relationships, more olde-tyme Hollywood stuff (though what’s there is pretty good), more mystical stuff like the singing bush! (I was a bit puzzled as to why mystical directions were required to find a perfectly corporeal location, ha ha!) And what’s the story with those Germans?
It’s sad to say, but if you ever wanted a master class in wasting talented comedy actors, this movie would do the trick! There’s a breathtaking scene early in the proceedings which manages to criminally underuse both Jon Lovitz and Phil Hartman! And Chevy Chase, despite being first billed in the credits, is mysteriously ignored! Martin and Short (ha ha!) get by, barely, but really it’s the Mexican actors who get the most care lavished upon them! Landis is on the record as saying he was much more interested in the banditos than the Amigos, so I guess that follows!