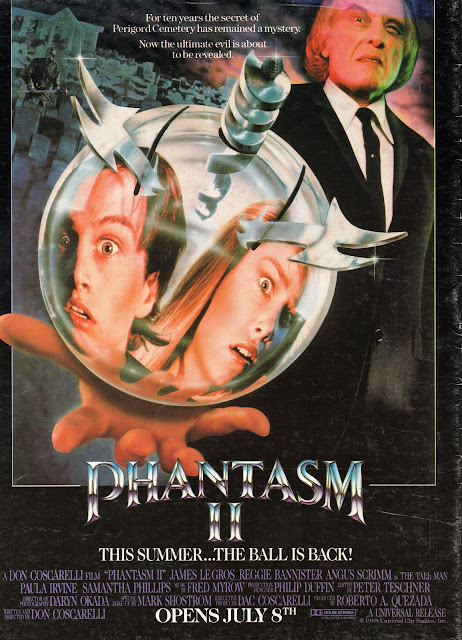 Hello BO-O-O-O-OYYYYY! Ha ha, no, don’t worry, that wasn’t the famed Tall Man, it was just me, Burl! Yes, I’m here to review one of the Phantasm pictures for you, and it’s the one I’ve always secretly loved the best – ha ha, sorry A. Michael Baldwin and everybody! – Phantasm II!
Now don’t get me wrong, I think the first Phantasm movie is a tremendous low-budget horror movie, brimming over with imagination and clever craft! It doesn’t make much sense, but that’s okay – it’s probably one of the most genuinely dreamlike movies ever made precisely for that reason! Like a dream I can never keep the details of that picture straight in my mind, and the same goes for the third and fourth movies in the series!
The second one is probably the most straightforward of them all, no doubt because it was a major studio presentation, and those Universal Tower suits aren’t known for their hearty embrace of surrealistic ambiguity! But I saw the movie at a formative age and in a formative way – I was too young by law to see it, but successfully snuck in to a screening and had a great time!
For those of you who don’t know, the basic conflict in these movies is between a good-guy group made up of a youth named Mike, his older brother Jody and their friend, a bald, pony-tailed ice cream man named Reggie, and an imposing other-dimensional bad guy named the Tall Man! The Tall Man hangs out in earthly mortuaries and first midgetizes then enslaves the dead, occasionally creating some extra dead by use of his flying silver sphere weapons! The zombie midget slaves are outfitted with cloaks that make them look just like Jawas, ha ha!
Reggie, who is played by a guy named Reggie, has always had a “friend of the director” sort of amateur ambiance about him, but that’s part of his charm, which is considerable! After the destruction of Reg’s entire family by fireballs – the movie opens with not one but two massive house explosions, ha ha – he and Mike take to the road in their boss hemi ‘Cuda and pick up the trail of the Tall Man, who has been leaving towns throughout the American Northwest dried up husks of the bustling hamlets they once were! Mike, played in this installment only by James LeGros, well known from Fatal Beauty, and the James Franco of his day, has a psychic connection with a blonde girl who is also being menaced by the Tall Man! Ha ha, his black wizardry is also causing terrible troubles for the girl’s poor granny, who undergoes probably the most torment any granny has ever endured in a movie! That part makes me kind of sad, because except for that awful Gramma in the Stephen King story, grannies ought to be venerated if you ask ol’ Burl!
I think I liked Phantasm II so much back when I first saw it because it was filled with so much cool stuff! The great car, the road trip aspect, the homemade weapons and the filmmaking style itself all seemed really fantastic to me at the time! It’s all paled a little bit in the intervening years, except for the car (and yes, I do want to weep when it meets its untimely end), but the strange attachment I have for the picture remains! And all the stuff that’s great about the Phantasm series in general is in there; and it does manage to retain the dreamlike nonsensicality of the other pictures even though actual dream sequences were apparently ruled out by the studio suits! (I actually think that might be for the best, because it forced the director, Don Coscarelli, to inject that chimerical imagination into the whole picture instead of just dream sequences!)
I watched my old VHS tape of Phantasm II – which I paid entirely too much for since it wasn’t on DVD at that time – again the other day, and I have to say I enjoyed it! I give the movie three double double-barreled shotguns!
Posted by Burl at 22:46