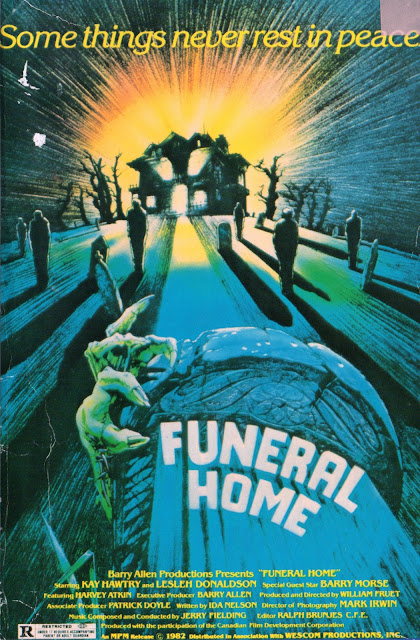 Buh-buh-buh-buh-BOO, it’s Burl! Ha ha, scary, eh? Yes, it’s me, Burl, here to review a movie about a super-strength granny and an eerie guest house! It’s called Funeral Home, though it’s also known as Cries in the Night – its original title, actually – and it’s another one of those motion pictures that exert a strange hex over ol’ Burl despite not objectively being very good!
Ha ha, I’ll try to explain! Like Meatballs, this is one of my Early Summer Classics, movies which I watch all of, or, more usually, a small part of each June as a way to celebrate the coming of my favourite time of the year! That doesn’t mean it’s a particularly excellent movie, though in this case it qualifies as not too bad!
I guess it’s technically a slasher movie, or at least it sort of fits into that category! It’s a Mystery Slasher, meaning it’s one of the many acorns which have rolled from the mighty oak that is Psycho! In this case, story-wise at least, the acorn did not roll too far, and in fact seems to have tried its best to crawl right back up the tree again!
Young Heather has arrived in a small Southern Ontario town to help her granny transform the funeral home once operated by granny’s now-disappeared husband into a tourist home! Ha ha, the mechanics of the transformation are not spelled out, but the home brings in guests right away! There’s a friendly old duck who loves night fishing called Mr. Davis, played by Barry Morse from Bells, and also a middle-aged couple out for a dirty weekend! Can you believe it, the fellow in this illicit couple is played by none other than Morty from Meatballs! Anyway, pretty soon these guests start disappearing in mysterious ways! Morty and his ladyfriend get pushed into a quarry while sitting in their car at Make-Out Point! Mr. Davis, who had his own secret agenda, comes to realize just how dangerous night fishing can be! And what’s young Billy Hibbs doing during all of this? Ha ha, this slow-witted handyman is as pure as skim milk, and comes to a sticky conclusion at the business end of a trocar, just as we see occur in the movie Mortuary, if you remember that one! (And also like Mortuary it has a misleading poster that makes it look like a zombie movie! Ha ha!)
Well, Heather turns all Nancy Drew and after much creeping around the hallways and basement of the funeral home, helps to solve the mystery! Howard the jokester from My Bloody Valentine is in the picture too, playing a young cop, and he also is present for the rather underwhelming climax of the picture! But an overwhelming climax would be wrong somehow for a movie like this, so the one we get was probably the right way to go!
Because you see this is a slow-paced, uneventful and frankly rather dull movie! And still I must admit to liking it, to getting a sort of warm and comfy, delightfully summery feeling from it! There are some movies which seem able to make an art out of shots of waving, sun-dappled grasses, and this is one of them! There are movies which neglect to use whippoorwill calls on the soundtrack and those which take care to do so at every opportunity, and Funeral Home is decidedly in the latter category!
I also like Lesleh Donaldson in her role as Heather, the rather naïve heroine! She’s a little dim and has a terrible fear of cats, but she’s the perfect character to carry a movie like this! I give Funeral Home two bearded sheriffs!
Posted by Burl at 22:25