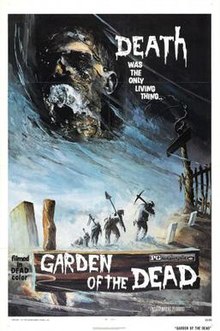 Hi, it’s Burl shambling towards you with his arms outstretched! Ha ha, I’ve often wondered to myself why there weren’t more zombie movies after 1968, when Night of the Living Dead became the most profitable independent picture ever made at that time! You’d think anyone with a camera, a few feet of film and some buddies willing to slap on blue makeup and stumble around in the night would be cranking out some kind of …of the Dead movie! Ha ha, I sure would have been!
Well, not everybody was asleep at the switch! In 1972, a macabre tale of formaldehyde-huffing prisoners who get killed in an escape attempt and then seek revenge as zombies came along, and it was called Garden of the Dead! I guess their garden was the graveyard in which they’d been shallowly buried, or else maybe the title refers to the fact that they carry rakes and hoes with which to commit their mayhem! Anyway, there’s no actual garden, but that’s okay!
The action takes place at a formaldehyde farm staffed by prisoners and run by a fairly mean warden! The guards aren’t that bad though – they allow Johnson, the nice-guy prisoner, to step outside the incredibly flimsy fence to hug his best gal, Mrs. Johnson, who comes to visit him every day but usually has to talk to her beau from thirty feet away! But after the big escape, in which Johnson gets knifed by the way, the warden and the guards ruthlessly hunt the formaldehyde-addicted felons down and blast them into cranberry jelly and drumsticks as they plead for their lives!
Because of all that formaldehyde they’ve huffed I guess, the boys don’t stay down for long! I didn’t know about formaldehyde’s reanimating properties, and you’d think there would be a lot more reports of hoodoo if that were the case, with schoolchildren being chased out of their biology classes by zombie frogs and the like! So the dead prisoners gather up some gardening tools, bellow their war cry “We must destroy the living!” and they’re on their way!
It’s a siege situation for the rest of the picture, with the camp under attack! Warden, guards, the remaining prisoners, anyone is fair game for these old boys! Except for Mrs. Johnson, whom the zombies would like to make their formaldehyde bride! It turns out that the zombies have only two weaknesses: bright light, which reduces them to Play-Doh form, and close-range shotgun blasts! But still, they’re pretty quick with those rakes and pick axes!
You know, this isn’t a very well-liked little movie by most, I'm sad to report! It’s barely an hour long, and there’s not a lot of time spent on character development and stuff like that – most of the screen time is devoted to the shots of the prisoners, pre- and post-mortem, huffing and drinking and wallowing in their beloved formaldehyde! Boy, they must stink pretty bad! I didn’t even know that formaldehyde could get you high!

But there are a few effective scenes, and lots of the old-fashioned foggy graveyard stuff that always plays well with a guy like ol’ Burl! I wish they’d put a bit more energy into the siege and tried to bring it up to Night of the Living Dead intensity levels, but no such luck! There’s one pretty neat scene where the survivors are creeping along towards a safe place, trying to stay within the beam of a prison searchlight as the growling zombies reach in from the darkness around them! And the generator keeps failing, ha ha! So this is a minor league Halloween treat, and I’ll give it two blue-skinned mustachioed goofs!
Posted by Burl at 09:13