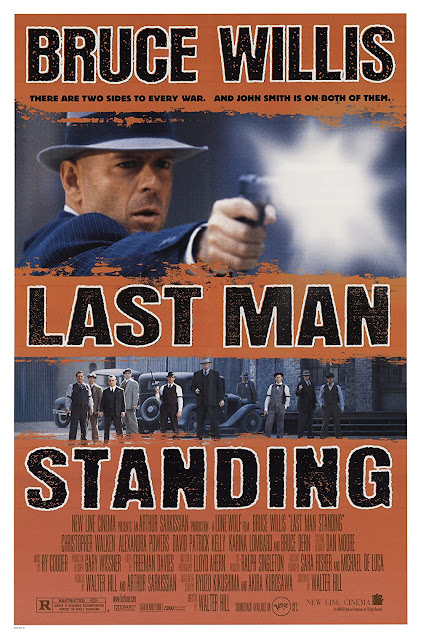 Blam-blam-blam, it’s Burl, here with a tale of genre-splicing gun-fu from the mid-1990s! What are the genres in question, you might wonder? Well, they took Kurosawa’s great picture Yojimbo, and, as Sergio Leone had done thirty years earlier, transplanted the story to the Old West! Except they made it less old – although everything is set in what looks like the typical Western town, the action takes place in the 1930s, and the cowboys have been replaced by bootleggin’ gangsters! Ha ha, and the result they poured out of the genre-mixing cocktail shaker is titled Last Man Standing!

It’s a Walter Hill picture, but more on the Extreme Prejudice end of things than, say the Brewster’s Millions one! This means the story is full of manly men with stone faces expressing manly sentiments and punctuating these with cannon-like blasts of their guns! Bruce Willis, whom we know so very well from festive pictures like The First Deadly Sin and Die Hard, is the stoniest-faced of them all, and he’s the nameless hero who rolls into town and quickly divines that there are two gangs nearly at war with one another, and that he might profit from this conflict!

One gang is Italian and is led by Strozzi, played by Ned Eisenberg from The Burning and Moving Violations! The other more consequential gang is Irish, and while the nominal kingpin is Doyle, played by David Patrick Kelly from Commando and Dreamscape, the real terror in this bunch is a fearsome scarface essayed by Christopher Walken, well known from The Sentinel and A View to a Kill and of course The Prophecy! Initially neutral parties in the town include a corrupt but redeemable sheriff played by Bruce Dern, a fine actor we’ll recall from The King of Marvin Gardens and The Laughing Policeman, not to mention Hill’s The Driver; and innkeeper William Sanderson from Blade Runner and Nightmares, who I guess was cast not just because he was perfect for the role, but because he’d already been in an earlier picture called Last Man Standing! Ha ha!

If you’ve seen Yojimbo – and I assume and hope you have, ha ha! – you know how it goes! Willis joins up first with one gang and then the other, playing both sides against the other and appearing to be a step ahead of them all the time! But then of course he gets ahead of even himself and suffers the sort of beating that would have any actual person hospitalized for months, but which Willis weathers with only a limp and the occasional pained wince! Of course it’s not giving away much to indicate that yes, despite this punishment, by the final frames of the film he indeed is the last man of the title!

Walter Hill’s in full Peckinpah mode here, though the movie conspicuously lacks the poetry and profundity not only of Peckinpah’s best works, but of Hill’s! (I don’t call it a rip-off, though, especially because Hill knew and worked with ol’ Sam, so that gives him a certain leeway in this arena!) Whatever resonance there was to this particular story had already been wrung out of it by Kurosawa and Leone, I guess, and so when this iteration comes to an end, and as entertaining as it may be while it’s on (and given the cast and Hill’s well-honed craft, it is entertaining), the only reaction possible is a sort of shoulder shrug! I give Last Man Standing two ahh-ooga cars!