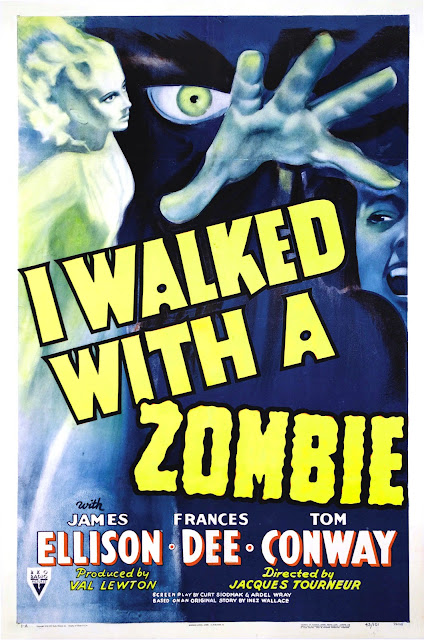 By a gust of the tropical winds it’s Burl, here with a film I’ve long loved! Ha ha, if you’re a fan of zombie pictures you’ll know there’s no shortage of such movies which predate the one commonly thought of as the great-grandpappy of the genre, Night of the Living Dead! Of course there are plenty that came before! Naturally there’s White Zombie, and Revolt of the Zombies, and King of the Zombies, and of course Zombies of Mora-Tau! But my favourite of them all is this wonderful Val Lewton production, I Walked With A Zombie!

As is often mentioned in reviews and notices, the story cribs a little from Jane Eyre: in this version, a Canadian nurse, Betsy, played by Frances Dee from Mister Scoutmaster, is engaged to care for the wife of a Rochester-esque sugar planter on a West Indies island, as the wife has gone cataleptic! The planter, Paul Holland, is played by Tom Conway from Bride of the Gorilla, here very much in “George Sanders’s older brother” mode, and when Betsy arrives in the fictional land of San Sebastian she finds not just a cataleptic woman but a whole hotbed of family dynamics, some dynamite calypso music, and an island nation founded on the blood and sweat and tears of slaves! It’s a colonialist tale for sure, but, for the time, an uncommonly sensitive one!

Paul Holland has a younger half-brother called Wesley Rand, played by James Ellison from Sorority House, and there’s bad blood between the semi-siblings – something to do with the mute and mindless Mrs. Holland, who nightly glides around the island in her flowing white gown, a puppet of the voodoo houngans! There’s also Paul and Wesley’s mother, Mrs. Rand, who seems helpful enough, and a doctor, played by James Bell from A Lawless Street, who doesn’t believe in voodoo powers! But the locals know better, ha ha – these personages include Theresa Harris from Strange Illusion as Alma, the maid; and Sir Lancelot, who was also in Curse of the Cat People and The Ghost Ship, here performing some marvelous calypsos, through which he supplies some background on the Holland-Rand family and their tribulations!

The walk of the title is one of the picture’s highlights! Betsy takes Mrs. Holland to the voodoo hounfour in a bid to cure her, pushing through jungle and reed, past a skull and a dead pariah dog hanging from a tree, and meeting big tall Darby Jones playing the zombie guardian Carrefour! Ha ha, I love that walk! It’s beautifully photographed by J. Roy Hunt, whom I think of as the guy who shot Mighty Joe Young rather than as a master of sinister light, but here he even gives regular Lewton cinematographer Nicholas Musuraca (who shot The 7th Victim and whose very name conjures up velvet-black shadow) a decent run for his money!

And of course it’s all nicely directed by Jacques Tourneur, responsible also for such marvels as Lewton’s The Leopard Man and the great noir Out of the Past! The conclusion is dark and tragic, but not hopeless – it’s all a sort of tropical poem haunted by death and by the clacking of dried palm fronds, the moan of the wind, and the crash of the surf at night! It’s a picture I hold close to my heart, and I recommend it highly! I give I Walked With A Zombie three and a half carafes!