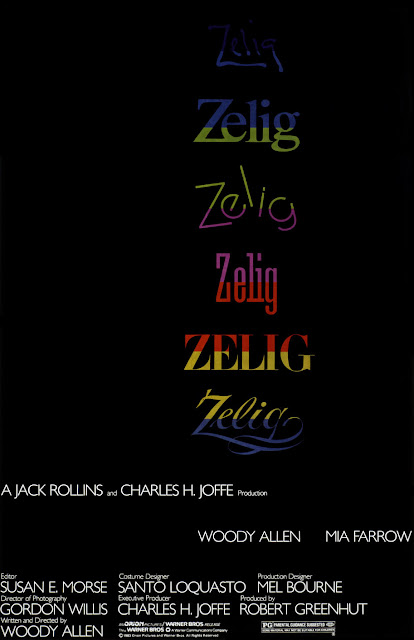 By the power vested in me, it’s Burl, here with another taste of the Woodman! Yes, it’s a Woody Allen picture, and whatever you may think of this fellow in personal terms, and deep within the chambers of your heart, he did make some good movies along the way! Broadway Danny Rose is fun, and so is Sleeper; and of course there are many others too - some of them merely okay, others very good indeed! This picture, Zelig, is one of his least typical movies, and for my money one of his best!

It’s a faux documentary, which is a form Allen had tackled before with his very first proper picture, Take the Money and Run! But this one is much more committed to its documentary-ness and therefore much less obviously a comedy, though it’s well-supplied with jokes! It’s the tale of Leonard Zelig, a nebbish of the early 20th century, who so desperately wants to fit in and be liked that he has gained the ability to become, in just about every way, just like the people with whom he is surrounded! By garr, he's a human chameleon!

Set (delightfully!) in the late 1920s (though almost overdoing the period detail along the way, ha ha, which I’d have thought near impossible), the picture opens with the discovery of Zelig and his strange affliction, then follows him as he’s hospitalized under the care of glasses-nerd doctor Eudora Fletcher, played by Mia Farrow, who’d made her Woody Allen debut the year before in A Midsummer Night’s Sex Comedy! It chronicles the ups and downs of Zelig’s life as he becomes a famous oddity, then is taken into the care of his half-sister and her shady boyfriend, neither of whom give a minkling for Zelig’s well-being; then, after a murder-suicide spree among his sister and her two boyfriends, the movie tells us, Zelig is again on his own! A renewed connection with Dr. Fletcher, a cure for his condition in the offing, and a budding romance all point toward happy days for the Z man, but a sudden barrage of scandal and a complication involving Nazi Germany mix things up further for the poor chameleon!

All of this is presented in classic documentary fashion, with a perfectly-chosen narrator ("They try to pull off his diz-guise, but it is not a diz-guise!") telling the story, and a great rush of old documentary footage, newly-shot but cleverly treated-to-look-old footage, contemporary talking head interviews with (often) real people, like Susan Sontag and Saul Bellow, providing pictorial detail and additional commentary! I must say I’m in awe of some of the technical accomplishments here – the cinematographer, Gordon Willis, and the editor, Susan Morse, have done some brainbustingly admirable work in matching the new footage to the old and spiriting Zelig into shots with Hitler and Jimmy Cagney and Josephine Baker and Tom Mix and so forth! The re-creation of the Zelig life story – clearly shot to resemble a Warner Bros. production of the 30s – is note perfect too, with Garrett Brown, the dad from Uncle Buck, looking hilariously whitebread as the actor playing Zelig!

Ha ha, the picture is probably more about Allen himself than he might admit, which adds a nice layer to it all! On the debit side, the movie feels a lot longer than it actually is, and there’s a same-iness to it that sometimes causes a little feeling of drag or repetition! But that’s only occasional, and there are enough wonderfully subtle gags and a wild array of highlights, both technical and one may say structural, to override these minor issues! The newly-created novelty songs are also brilliant, and the period music perfectly selected, right up to the wonderful tune that ends the film! I like this picture a lot, and so I give Zelig three and a half houses painted a disgusting colour!
Posted by Burl at 13:35