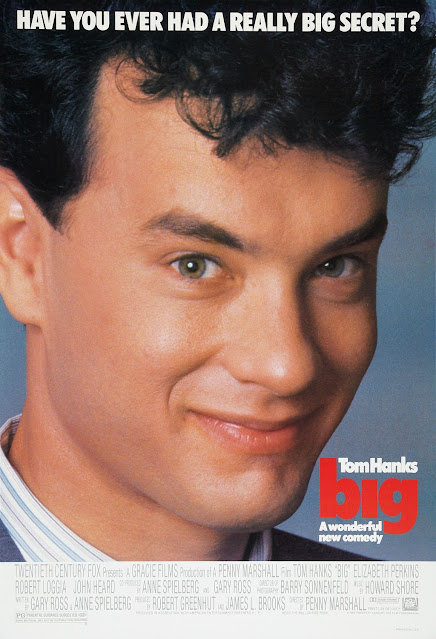 Up, up, and away, it’s Burl, here to review the beloved classic from years gone by! Ha ha, it’s a beloved classic to a lot of people I guess, but not to me, because this is one of the popular pictures I ignored back when it was new, and continued to ignore as the years went by! (I ignored all the late-80s body-switch pictures in fact - Like Father, Like Son, Vice Versa, 18 Again!) In fact I only just saw this particular picture for the first time a few years ago, and now I’ve watched it again, and am prepared to review for you a little movie called Big!

Of course it comes from director Laverne DeFazio, who also brought us pictures like Jumpin’ Jack Flash, A League of Their Own, and other popular entertainments I haven’t seen! Big begins by introducing us to 12-going-on-13 year-old New Jersey kid Josh Baskin, who hangs out with his little pal Billy, played by Jared Rushton from Lady in White, and suffers an embarrassment in front of the school cute girl when he’s too tiny to get on a roller coaster! He consults a fortune telling machine called Zoltar, makes his wish to get bigger, and wakes up the next morning in the form of Tom Hanks, whom we know so well from Volunteers and The Money Pit!

Mercedes Ruehl from The Secret of My Success plays his mom, who’s horrified when the gangly Hanks appears in her kitchen insisting that he’s her son! Ha ha, the poor woman! (The movie is too determinedly cheery to dwell on the horror these poor parents must be feeling for the many weeks their son is gone, apparently kidnapped by a fresh-faced comedy actor!) She chases him away, and Josh runs to the school and manages to persuade a terrified Billy that he is who he claims to be, and so the two head to the big city, New York!

Pretty quickly the movie edges into 80s boardroom comedy territory when Josh bluffs his way into a job at a toy company, then charms the avuncular owner – played by Robert Loggia from Psycho II, of course – with his childlike outlook and a spirited round of piano dancing! So he instantly becomes a vice president in charge of playing with toys, a perfect job for a kid, and snags a huge loft apartment (which in New York, even in the 80s, would be outside the price range of a minor executive) while being regarded as a weird eccentric by his co-workers! These colleagues include Jon Lovitz from ¡Three Amigos! as a fellow who tries to give Josh tips on becoming a love-yuppie; John Heard from C.H.U.D. as Paul, who develops a rivalry with the free-spirited boy-about-town; and Elizabeth Perkins from Love at Large, whose affections transfer from Paul to Josh with all due haste!

Ha ha, yes, the twelve year-old in the big man’s body has sex in the course of the picture, and, to the irritation of his little pal Billy, is pulled, with a gruesome inexorability, into the adult world of work and responsibility! In fact he seems to thrive in the corporate atmosphere in which he’s been plunged, and that might be the most Reagan-era aspect of this picture – anyway, that and the giant Pepsi machine Josh installs in his loft! Yes, this is a capitalist entertainment through and through: too timid to explore the real ramifications of what’s happened to Josh and his family, but, like its hero, happy to sit on the floor and play with toys!

It’s all done with studio professionalism, plenty of polish, and not a little charm; though not quite so much as it believes itself to have! Hanks is the picture’s ringer, of course, and the movie paid him back by becoming a big hit and sending him to the stratospheric heights of stardom in which he’s marinated ever since! But watching it today I think to myself “Ha ha, no wonder I didn’t bother with this back then!” It was the biggest (ha ha!) of the body-switch movies, despite the fact that Josh doesn’t actually switch his body with anyone, but to me it’s not any great shakes! I give Big two canapés!