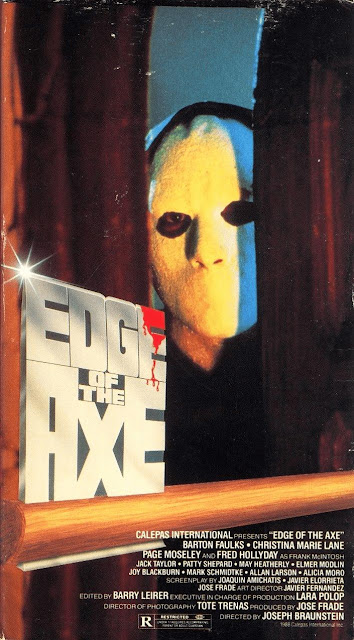 ¡Hoy! ¡Hoy! It’s Burl here to review an Iberian/Californian co-production slasher picture from the venerable Spanio-English director José Ramón Larraz, who of course also brought us Scream…and Die! His pictures from the 1970s had a certain sleazy something, but by the late 80s he was taking a different approach, and that’s all too evident in his slasher picture Edge of the Axe!

The action is set in the woods of California, though some of the killing scenes were clearly shot later, probably back in Spain, because they involve characters and locations that are never part of the main action! But the first murder is set in a car wash, and I have to say that one is not badly done, though it’s competently shot enough that you can easily see how it might have been done better still! Ha ha, is that churlish? I hope not! But the scene serves to show us what the deal is in this picture: a white-masked axeman giving the chop to seemingly random ladies!

From there we meet our two main characters, who also serve as our two main suspects! We’ve got computer nerd Gerald, played by Barton Faulks from Future-Kill, and Page Mosely from Girls Nite Out as an exterminator called Richard Simmons! He’s married to an older wealthy lady named Laura, played by Patty Shepard from The Werewolf Versus the Vampire Woman, and she’s worried, quite rightly, that her vermin-killing husband might be playing bohankie with other ladies on the side!

In fact he is carrying on with another lady, and taking her on motorboat rides in fact, while meanwhile Gerald has met Lillian, played by Christina Marie Lane from The Allnighter! He presents her with a computer, upon which she immediately pastes a picture of Dudley Do-Right, and hooks her up to a proto-Internet so they can play games together and communicate in a sort of email system that reads aloud all their messages in a hollow, echoing, affectless voice! During all this the chop crimes continue, and law enforcement in the town is represented by the crustiest, least helpful sheriff in slasher movie history, played by Fred Holliday from Airport, who, after four or five axe murders, remarks that this could develop into an ugly situation! Ha ha, this fellow is like the angry Far Side version of Chief Newby from My Bloody Valentine!

While the exterminator and his new girlfriend sort of fade from the story, faces familiar from Iberian horror pop up throughout the film: Alicia Moro from Slugs, Jack Taylor from Pieces, and Conrado San Martín from The Awful Dr. Orloff all make appearances, and more often than not get the chop! As more and more townsfolk are forced to undergo the major barbarisms, and corpses pop up everywhere, sometimes literally, it’s easy to forget that this axe murderer also counts among his victims a pig, a dog, and a fish! The dog in particular made me sad – he looked like a nice little guy!

The end has more twists than a chimp’s beanbucket, or anyway seems to, and I’ll confess that between the muddy VHS sound and the forced air furnace of my home some of the dialogue was lost, and I didn’t always follow what was what and who was who in that climax! But I know that Lane’s performance as Lillian was a pretty good one, and that’s maybe in part a testament to Larraz’s years of experience too! But apparently he thinks of this one as his worst picture, and ha ha, I’m in no rush to challenge him on that! I'll commend him, though, for including a few actual Special Makeup Effects in his movie, mostly in the form of corpses discovered later, but there are a few chopped fingers and such too! All in all, I give Edge of the Axe one and a half Color of Money posters!