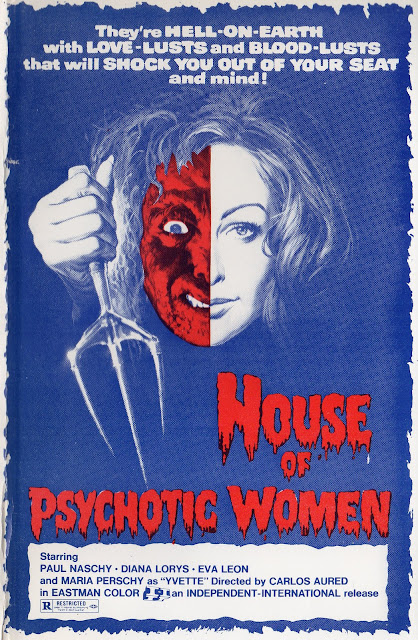 Hi, Burl here with some Iberian horror for you! Ha ha, the Spaniards have a long tradition of spookshows, and one of their most famous monstermen was Paul Naschy, aka Jacinto Molina, who often played a troubled werewolf named Count Waldemar (as he did in The Werewolf vs. the Vampire Woman), or else he fought mummies, sorceresses or yetis! Monster trouble was a regular staple of his working life, and his refrigerator-like body was often pushed to its very limits by their incessant attacks, or by his own lycanthropic transformations!
But there weren’t always monsters in his pictures! This one, for instance, as promised by the title, features a dwelling inhabited by neurotic ladies, and is informed by the then-popular giallo black-gloved killer films being produced in Italy! (The movie is better known these days under its original, more giallo-esque title Blue Eyes of the Broken Doll!) Old Jacinto plays an ex-con with a history of violent behaviour who, in his quest for employment, finds himself working as a handyman in the titular structure! The ladies in question are three sisters who each have their own dire problems, which are not necessarily solved by Jacinto’s arrival! However, as in movies like Forbidden World, we find that his janitorial duties include quite a bit of, ha ha, “troubleshooting!”
But there are also murders afoot of course, all enacted to the strains of Frère Jacques, which is a song I had to sing a lot in school when I was but a young sprout! That added a strange aura to the proceedings, I must say! The murders are all of pretty young blonde ladies, and involve the gruesome post-mortem removal of the victims’ eyes! Ha ha, yikes! But who could be behind this killing frenzy? Could be Jacinto, or one of the psychotic women, or any of a number of other characters! The final answer is slightly convoluted, as always in these pictures, but also entertainingly goofy!
And of course the fireplug presence of Paul Naschy is always a boon to any picture! He helped write the screenplay too, so of course there are numerous scenes where he takes off his shirt and makes love to the beautiful but damaged ladies of the house! But I do have to say I was surprised at his fate in the movie! It’s always nice when something genuinely unexpected happens in an otherwise fairly prescriptive outing! And as it all comes to a climax, so too do the haunting strains of Frère Jacques!
As for the rest of the movie, well, it’s a bit of a daffodil and could really have used a bit more Eurocool style, that being the currency in which your typical giallo prefers to trade! But more often House of Psychotic Women seems to prefer the rather cheap-looking, gritty and zoom-lens happy techniques we see in Jess Franco films and suchlike! Oh well, it makes for an interesting pudding at the very least, and I give this picture two unsafely utilized garden harrows!
Posted by Burl at 11:44