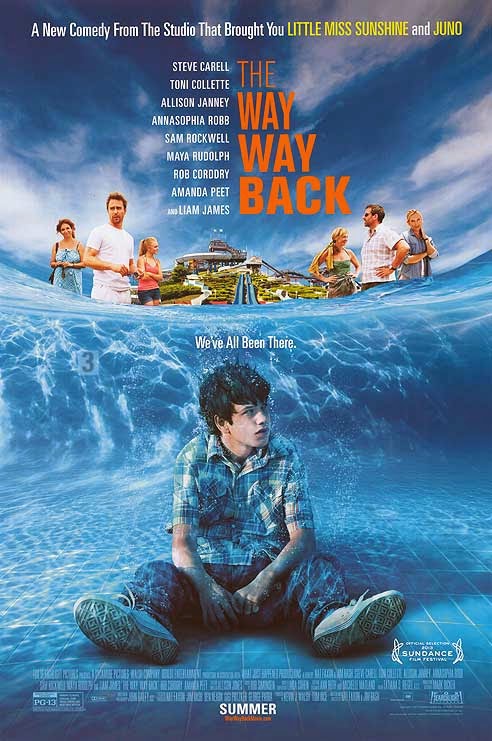 Hi crooners, it’s Burl, here to review a coming-of-age picture! Ha ha, there are plenty of movies just like this one, and I guess there always will be, because I suppose just about every adult is someone who has come of age in some fashion or another some time in their lives, and it’s a pretty irresistible subject for anyone with a hankering to write or make movies! I even have an idea of my own for such a picture, ha ha! I think I’ll call mine The Clapper-Loader! Sounds good, doesn’t it!
This particular one is called The Way Way Back, and in some ways it might just as well be Meatballs with the names and locations changed! You see, ha ha, there’s a painfully shy young fellow spending time against his will in a summertime location where everybody else seems to be having more fun than him, and an adult wiseacre, who is nominally in charge of an establishment and takes every opportunity to make jokes using its P.A. system, takes it upon himself to befriend and help out the youngster, even while being asked by his own prospective ladyfriend to just please grow up a little!
Ha ha, that could be a description of Meatballs, but it’s The Way Way Back I’m talking about! Fourteen year-old Duncan is a taciturn lad, and seems possibly somewhere on the more operational end of the autism scale! I don’t think he’s supposed to be, though! His divorced mom, Toni “Fright Night” Collette, has a pretty nasty new boyfriend, Trent, but Trent, a horrorshow of emotional bullying and passive-aggressive manipulation, has one single positive quality: he owns a New England beach house! And so that’s where Duncan finds himself stuck for the summer, surrounded by snooty girls, overbearing neighbor ladies, weird little kids and perpetually drunken or hungover adults!
Luckily he finds the local waterpark, where Trent’s polar opposite, Owen, is the manager! Owen, an affable sort, is in his own way as weirdly aggressive as Trent, though! Every word he says is part of some kind of joke routine, and so he’s less a character than a walking gag generator! It’s a good thing Sam Rockwell is playing him and not, say, David Spade, because that would be doubly intolerable! In fact most of the performers are pretty strong; even Steve Carrell as Trent, who has to be a dick in absolutely every scene, manages to create a recognizably human persona!
Ha ha, it’s pretty obvious this movie was meant to take place in the 80s sometime, but they just didn’t have the money to recreate the period! The lengths they go to in order to recall that era are almost painful, though – certainly a bit embarrassing! The title refers to the very back seat they used to make in station wagons, and since that particular accessory is long gone, Trent must suddenly become the sort of character who would lovingly maintain a vintage station wagon, and pack all the luggage on top of instead of in the back so the picture can live up to its title! And the waterpark must be described in the dialogue as a place frozen in time since 1983! And Duncan must listen to REO Speedwagon for no good reason, ha ha! And so on!
There are a few strong scenes and performances here and there, but the picture is so rote, so predictable, so derivative and so formulaic that all its good points become regrettable ones, as they might have been in the service of a better movie if only these filmmakers hadn’t chained themselves so inflexibly to a concept they hadn’t the means to pull off! It does manage a sort of 80s flavor, which is to its credit, and it's very nicely photographed by John “In The Line of Fire” Bailey, but on the whole it makes you wish you were watching Meatballs instead! I give The Way Way Back one and a half contrivances!
Posted by Burl at 12:21