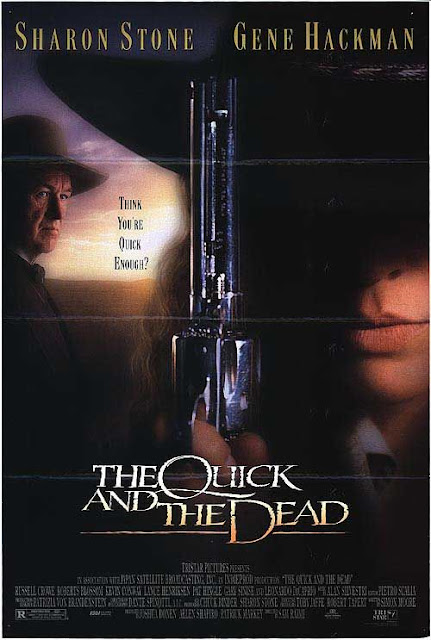 Hi, it’s Burl here, reviewing a Sam Raimi oater from the mid-1990s! Yes, the picture is The Quick and the Dead, and I remember enjoying this one most heartily at the movie palace when it was originally released! Ha ha, that crazy Raimi style fit unexpectedly well with the western genre, I thought at the time!
Well, I watched it again recently to see if I still felt that way! I guess I feel a little differently – the nutty camera angles and general hyperstylization seem a little grafted on, truth be told! But that certainly doesn’t mean I disliked the movie! No sir, it was still an amusing and energetic charleston, even if they did steal the excellent title from Louis L’Amour! Ha ha!
The story is a basic one: wronged lady returns to a Olde Western town looking for vengeance, ha ha, and gets caught up in a shootin’ match held by the burg’s nefarious godfather! She proves to be a solid challenger, and eventually, as the roster of gunfighters is whittled down, final justice is served! Ha ha, pretty rote stuff, on paper at least!
But first of all, what a cast! Ha ha, Sharon Stone plays the lady, and that’s fine or whatever, but you also get Gene Hackman, who plays a very nice baddie – they say he’s grumpy in real life, so I guess that helps, ha ha – and you have your future superstars like Russell Crowe and Leonardo DiCaprio; a cameo from Gary Sinise of Apollo 13 in the role of Dad; fine genre players like Lance Henrikson from Pumpkinhead, Keith David from The Thing and Tobin Bell from In the Line of Fire; awesome old-guy performers like Pat Hingle from Maximum Overdrive, Roberts Blossom from Christine, and Woody Strode from Kingdom of the Spiders in his very last role; and then just a bunch of ringers like Kevin Conway, Mark Boone Junior and Sven-Ole Thorson! Ha ha, it’s a thespian buffet with something for everyone!
Behind the camera there’s plenty of talent too! Dante Spinotti is the cinematographer, and he shot Manhunter and Heat after all! Too bad he hooked up with that guy Brett Ratner! Maybe he and Michael Mann look alike and old Dante just got confused, I don’t know! Ha ha, but he sure did a fine, heat-hazed, sunbaked job on his one Raimi outing!
The script has a strangely mechanical feel to it, but maybe that’s just a natural outgrowth of the single-elimination tournament structure in which it trades! I do recall feeling some suspense about who was going to shoot against who, and who would win; looking back, it all seems very prescribed! I can’t be sure if that’s endemic to the movie or just me – probably just me! Ha ha!
It’s an fun movie, that’s for sure, and as noted, a feast for character actor fans! And I’m certainly glad Sam Raimi got a chance to do a western! Altogether, even though it’s not quite as great as I remember it being, I’m going to give The Quick and the Dead three clunky ticks of the clock!
Posted by Burl at 22:32

Email ThisBlogThis!Share to TwitterShare to FacebookShare to Pinterest
Labels: 1990s, action, oater, Raimi, saw it on the big screen