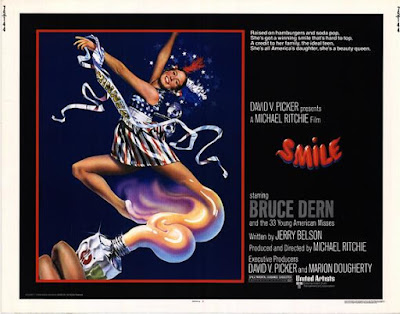 Hey, it’s Burl here with a review of another great Michael Ritchie picture! Like The Bad News Bears, this one concentrates on, and dissects in sublime, satirical detail, one of Americaland’s favourite competitive pastimes! The picture is Smile, and the subject, ostensibly, is beauty pageants!
But like so many Ritchie films, the real subject is middle-class America! Ha ha, as the picture begins we find ourselves plunk in the middle of Santa Rosa, California, which is hosting the Young Miss America statewide finals, featuring winning girls from all across the state! The town is in a tizzy, and we follow some of the young ladies and a number of the townsfolk through a week of life’s rich pageant! Ha ha, the approach is Altmanesque, or you might say it was if the key Altman films of this sort had come out earlier; but can you imagine, this picture and Nashville were shooting at exactly the same time in the summer of ’74! So is Smile Altmanesque, or is Nashville Ritchie-esque? Ha ha, both, neither!
Our biggest star in the film is Bruce Dern, well known from Django Unchained and so many other films; but he’s not exactly the main character! Well, he’s close, but the focus is mainly on the girls, and in particular a girl called Robin, played with great appeal by Joan Prather from The Devil’s Rain! Robin is the one who can’t quite get into the pageant spirit, and for this reason she seems the most sensible and intelligent characters!
There are plenty of familiar faces among the other girls! Annette O’Toole, who has always struck me as extraordinarily beautiful, is excellent as a girl who knows a few pageant tricks; and we also have such pretty and talented lasses as Melanie Griffith from Fear City, Caroline Williams from The Texas Chainsaw Massacre 2, Maria O’Brien from Protocol, Colleen Camp from Track 29, and Denise Nickerson, Violet Beauregard herself from Willy Wonka & the Chocolate Factory!
There are terrific performances from the townsfolk too, especially that of Barbara Feldon, Agent 99 herself, as a housewife who takes on organizational duties with an almost supernatural fervor! We also get Geoffrey Lewis from ‘Salem’s Lot as another organizer, Dennis Dugan from Night Moves as a janitor’s assistant, and three horny kids who seem like the prototypes for any number of 80s teen sex comedy gangs! Ha ha, that redheaded kid was a particular laff-riot!
Dern’s character is a local car salesman and clubman, an eternal optimist and a true believer in the pageant and its principles! There’s a scene in the middle of the picture in which Dern and his aging fratboy clubmates have a big party in the woods, in which they dress in sheets for some reason - not KKK sheets, but only just - and smash eggs on each others’ heads, and watermelons on their own! Frankly it looks like the absolute last sort of party I’d ever want to attend, and that of course is the point! The picture looks at middle class amusements and mores with the same acid eye of someone like John Cheever!
The movie is shapeless in the best 1970s way, frequently very funny, and has a nice little punchline! Ha ha, and the punchline undercuts what I was seeing as a certain naïveté or willful blindness in its attitude, so I was glad of that! Maybe it wasn’t the most realistic look at the exploitation angle of these contests, but that’s okay! Ha ha, it doesn’t have to be everything! Smile was great just as it was, and I give it three wooden feet!
Posted by Burl at 17:09