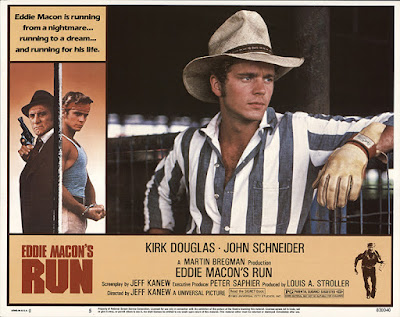 Watch out, here he comes… and there he goes! Ha ha, it’s Eddie Macon’s Run, and it is I, Burl, here to talk about it! This is a chase picture, mainly, and for me was one of those movies that I was aware of thanks to the ubiquity of the VHS box, but never had any interest in seeing… until now!
In fact I can’t claim any real interest in seeing it, but, having spotted the tape lurking in my basement, I watched it anyway! The picture was an early effort from Jeff Kanew, who later gifted us with Gotcha!, and Kanew wrote and edited it as well! Ha ha, kanew believe it! I guess the mastermind behind Revenge of the Nerds was once a sort of auteur!
He began a relationship with Kirk Douglas (well known from The Fury and Out of the Past) on this picture too, which he would continue later with Tough Guys and I think some kind of Kirk tribute documentary! Ha ha, it must have been pretty great to be a filmmaker who became friends with Kirk! And Kanew uses him pretty well in Eddie Macon’s Run!
John Schneider, well known from The Curse and of course for essaying the role of that shine-runnin’ Bo Duke, plays the title character, a fellow who’s been thrown in the pokey for doing virtually nothing beyond having put a punching on John Goodman, from C.H.U.D. and Matinee, who plays a nasty man entirely deserving of it! He’s chased by cops and pulled over and railroaded right into slam, and away from the family he loves so well! Immediately he escapes and is re-caught by a professional chaseman played by Douglas, but not before he smites Douglas a sound clobbering upon the pate! Now Eddie Macon is facing a nickel’s worth in the pen, and boy howdy he doesn’t like it!
Now, all of this background business is delivered throughout the picture in the form of flashbacks, which is too bad! Eddie Macon’s major escape occurs right at the top of the picture, which initially cheers the viewer - ha ha, she thinks, here is a picture that begins right away! Then the flashbacks start popping up and the heart sinks, for we know this flashbackery will continue until the proto-story is told! But front-loading all this background would have been bad too, of course; much better would have been to find the most economical way possible to deliver the necessary information and get on with the chase itself, which after all is the topic of the picture, and even of the picture’s very title! We don’t need to be persuaded of Eddie Macon’s relative innocence, or have it laboriously spelled out for us, because Schneider’s performance is sufficiently solid and goodhearted to meet that need!
Aside from Kirk and John, the picture features performances from a pair of slasher movie ladies: Leah Ayres from The Burning and Lisa Dunsheath from The Prowler! The former is Eddie Macon’s beloved wife, who sets out a backpack full of escape supplies for him! The latter plays a member of a demented ranching family, which also includes menacing tallmen Tom Noonan from Wolfen and F/X and Jay O. Sanders from Hanky Panky and JFK, who-all capture Eddie and attempt to lynch him right in the middle of their living room! Ha ha, this is quite a sequence all right, and serves as a nightmarish centerpiece to the picture; quite at odds with the rest of it, frankly! Ha ha, but I was glad it was in there!
Finally Lee Purcell, whom we know from Necromancy and Mr. Majestyk, shows up to play Jilly Buck, who becomes Eddie’s last-act guardian angel and helps see him to a happy ending! Kirk does his bit too, of course, but only after a car flip scrambles his molecules! Ha ha, the chase at the end is okay, and the rancher scene is pretty unsettling, but otherwise the picture is not as thrilling or exciting as it would like to be! The performances are fine and we all want Eddie’s run to be successful - and it is literally a run, as Eddie's preferred method of escape principally consists of jogging - but in the end there isn’t a whole lot of hossmeat to the picture! It comes in, does the job, and takes its leave with a courtly bow and a curt “good day!” I give Eddie Macon’s Run two games of Gorf!
Posted by Burl at 21:43