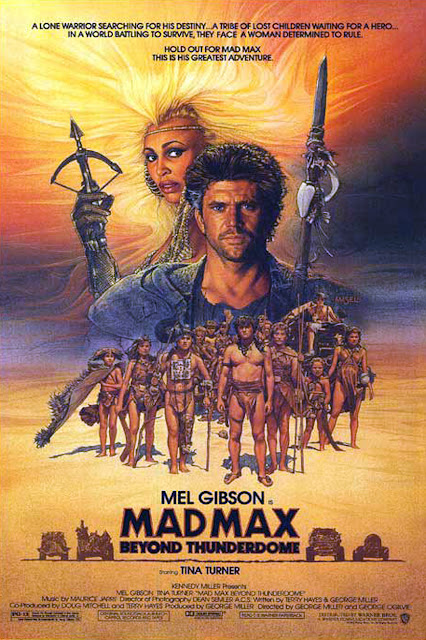 Vroom vroom, it’s Burl, here to review one of those Mad Max pictures that we all love so well! Now, Mad Max Beyond Thunderdome is not the best of them, and in fact is almost certainly the worst! It’s certainly the most off-brand, as there’s hardly any car racing in it at all, relative to the other entries at least!
But for all that, I’m fond of the picture! Certainly the scenes in the thunderdome itself are dynamic and exciting, and what chase material there is toward the end is darned enjoyable! Plus we have a dynamic performance from Tina Turner, looking great in a chain mail dusset, and a fine twilight appearance from the great and small Angelo Rossitto, from Smokey Bites the Dust and The Dark!
The problem really is that the movie engages too freely in this trend known as “world building,” and while this is always assumed to be a positive and worthwhile effort in series pictures, I don’t myself believe it necessarily is, and moreover I feel it can be a real drag on the stories they’re trying so hard to expand upon! I prefer Max and his world to be a sort of abstraction, I think! He and his stories should be simple and suggest much!
I guess what it comes down to in this case is that, whereas the gangs in Mad Max movies (headed by The Lord Humongous in The Road Warrior and The Immortan Joe in Mad Max: Fury Road) usually claim to be a civilizing influence while in fact operating as neo-fascists, Turner’s Aunty Entity, and her pop-up city of Bartertown, genuinely are a step forward in this post-apocalyptic wasteland! This undercuts their menace a great deal, as does, incidentally, the picture’s PG-13 rating!
The movie opens with Max caravanning across the desert when suddenly Bruce Spence (playing a post-pockyclypse aeronaut just as he did in The Road Warrior, but a different post-pockyclypse aeronaut) swoops down out of nowhere and steals all his stuff! Max ends up in Bartertown, meets Tina and the Master Blaster (which is Rossitto piggybacking on a big guy’s shoulders), and some terrific side characters played by Frank Thring and Edwin Hodgeman! After his big thunderdome fight, Max busts a deal and faces the wheel, which decrees that he be gulaged out into the wasteland! Ha ha, this involves plunking him on a horse and sticking a Big Boy mask on his head for some reason! Anyway, he comes across a civilization of children who live in a verdant crevasse, then comes into conflict with the Bartertownians again, which leads to the final chase, and Angry Anderson hanging off a speeding train and dodging ironbars! Ha ha!
On this most recent viewing of the movie, which I watched with my son, I was not as scornful of the kids as I had been previously! Before I’d considered them no better than Ewoks, but now, with a child sitting beside me, I could appreciate their power and how desperately they cling to storytelling as a way to maintain their humanity! I especially liked the 2.35:1 ratio portable frame they use to help dramatize their origin story!
So it’s no action classic like Road Warrior, and it tries too hard to situate Max in a plausible environment (the plausibility of which is undercut by the array of pointless, arbitrary accoutrements that would in truth be low priorities for apocalypse survivors), but Mad Max: Beyond Thunderdome has on the other hand a wealth of entertaining details, a terrific score from Maurice “Dreamscape” Jarre, fantastic photography from Dean Semler, a nice dollop of wit, and some miniature model work at the end! I give it two and a half Angry Andersons!
Posted by Burl at 12:01