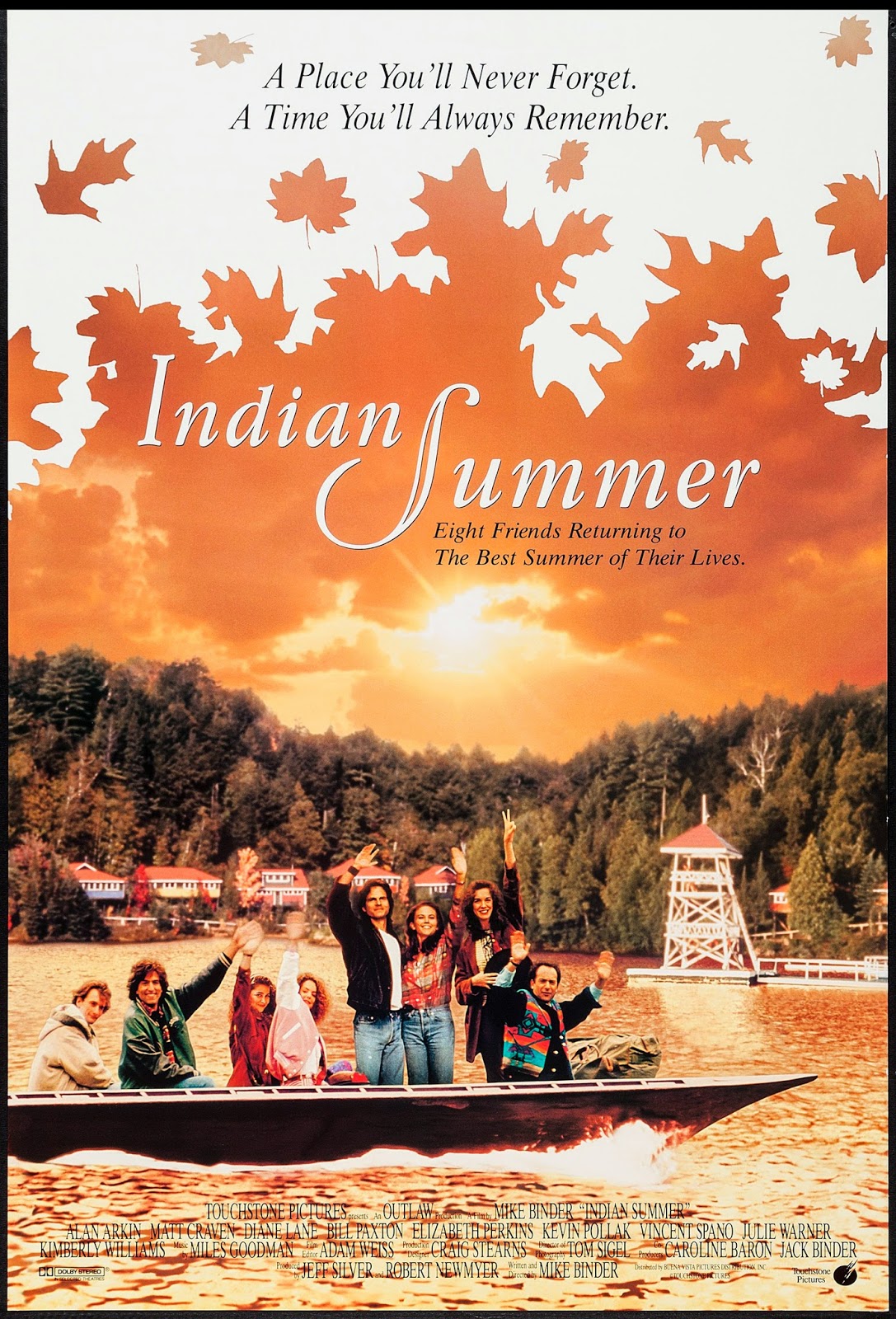 Ha ha, it’s Unca Burl here to review a summer camp picture for you! It’s a particularly late-season example of the genre, and I really should have waited until at least late August to even watch it, let alone review it for you! The picture is called Indian Summer, and it’s a real batstacker!
That term, "batstacker," may be unfamiliar to you, but hopefully this review will provide, if not a proper definition, at least some context! Indian Summer takes place at a summer camp in Ontario, just like Meatballs, and even features one of the stars of that venerable production, Matt Craven, who I believe played the glasses nerd in that earlier film! Here he plays a completely different part, a vain, irritable, utterly shallow ladykiller, one of the most annoying characters ever seen on screen!
He’s just one of several in this ensemble cast: former campers who’ve returned to good old Camp Tamakwa at the request of Unca Lou, their old head counselor, who figures on retiring and closing up the camp for good! Unca Lou is played by Alan Arkin, whom we know and love so well from Catch-22 and Heck’s Way Home, and I can tell you he’s a welcome sight!
Bill “Weird Science” Paxton plays a character meant, I think, to be an edgy, Walkman-wearing neo-hippie, who was once kicked out of the camp by Unca Lou for Some Mysterious Reason! Kevin Pollock, of Grumpy Old Men and its sequel, is a put-upon twerp! Diane Lane from Streets of Fire plays one of the ladies, and there are several more, and I think one or two other fellows, including, of all people, Sam Raimi, the director of Evil Dead II, playing a comedy dogsbody! None of them except Raimi are particularly likeable, and they all spend the bulk of the movie interacting with one another in a variety of ways, and there are some conflicts, ha ha, but nothing of much consequence happens!
I assume this is by design: that Mike Binder, the director, went to one of these camps, loved it, and decided to make this picture as a tribute to his experience, while being careful not to blemish the memory with too much drama! Fine, except he’s made one of those movies which those of us who never went to this particular camp (or any summer camp) will watch and wonder why on earth anyone would bother expending the effort on such a film! Ol’ Burl understands as well as anyone the powerful grip of nostalgia, also the urge to dramatize formative adolescent experiences, but this particular result is about as substantial and satisfying as a puff!
The location is very nice though, very lakey, and as I mention, it’s always nice to see The Bean himself (or was he Freebie?) acting in his laid-back, homespun Unca Lou style! Ha ha! I appreciated Sam Raimi’s efforts too, because he clearly relished the opportunity to perform some of the slapstick comedy he loves so well! For a non-actor he’s not bad (most directors are well able to act, I find!), but why he’s in it at all is nevertheless as much a mystery as why the thing was ever made! I'll tell you, this is a summer camp movie where you wish and wish it would suddenly turn into Friday the 13th or The Burning, just to be rid of some of these characters!
Ha ha! Well, you can see that I didn’t think much of this picture, though it’s not all bad, and they play “Hello Muddah, Hello Faddah” over the end credits! If you want an ensemble nostalgia picture you could probably do worse, but you could for sure do a whole lot better! I give Indian Summer one long-buried boxing trophy!
Posted by Burl at 10:11