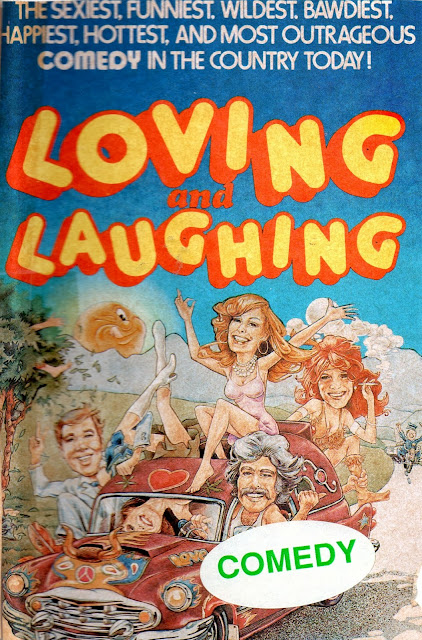 Eh bon, eh bon, c’est Burl! Oui, it’s your old ami Burl, ici avec another review d’un pellicule Franco-Canadien! The picture is one of a late-60s / early 70s cycle known as Maple Syrup Porn, and is called Loving and Laughing!
Ha ha, this is certainly a free-spirited movie, all right! Here’s a bit of trivia about it: none other than David “A Dangerous Method” Cronenberg campaigned hard to get the job directing the thing! And who can blame him, since it must have been a real gas to work on this film, as you’ll see! Anyway, poor Cronenberg didn’t get the gig, of course – a fellow named John Sole did, and then apparently never directed another movie ever again! Maybe he felt he’d done it all with this one!
This is the closest Canada ever came to making its own Malibu Beach, at least in ol’ Burl’s opinion! There’s more of a plot, but not much! It’s a hippie Trading Places more or less, and begins with a fellow named Reggie, the scion of an Anglo old-money Montreal family, leaving his overbearing mother for a summer trip to Vermont, where he’ll teach the daughter of a family friend to speak French! Along the way his car breaks down and he meets up with a funky bunch of free-wheeling Quebecois hippies! After a bit of skinny-dipping, they take Reggie to their commune! Lucien, the de facto leader of the commune, helps Reggie adapt to hippie life, and the two decide that Lucien should go on to Vermont instead of Reggie! Since the cops are after Lucien due to his fondness for marijuana weed, he agrees, and from then on it’s a case of two story threads running in parallel!
At the commune, there are several scenes of Reggie bumbling through the communal lifestyle, slowly losing his bourgeois inhibitions while wooing a lady called Lovely, and in Vermont, Lucien settles in with the rich American family: a hot-blooded mother, a sexy blonde fitness enthusiast, the pulchritudinous young lady to whom he is meant to be teaching French, and the delicate, lilac-scented son in the family, Edgar! There’s also a flirtatious French maid who regularly forgets to button up her blouse! “Ha ha, it’s going to be a long, hard summer!” Lucien moans!
It’s lighthearted shenanigans from here on in, with seemingly every scene ending with everybody taking off their clothes! Even when there’s trouble with the law – as there is in both Quebec and Vermont – nudity runs rampant! Ha ha, it’s pretty gritty nudity, it must be said, but there’s a sunny, carefree attitude to it that’s undeniably appealing! And there’s a very strange scene in which Lucien apparently uncovers the fact that the entire U.S. Army is gay! Ha ha!
As with Malibu Beach, there’s no distinct forward motion to the narrative, leaving it anyone’s guess where the movie is going or when it might be over! But also as with Malibu Beach, you don’t want it to be over, because the world of Loving and Laughing is a gentle, groovy, gossamer place, where potential buzzkills are swatted away with the flick of a whifflebird feather! As with any number of other pictures – The Beach Girls, Cheerleaders Beach Party and King Frat all come to mind – there’s a scene in which a dull, bourgeois party is reduced to a gigglefest by the spiking of the canapés with pot!
It may not be a very exciting movie, but it’s a comfortable place to spend an hour and a half, I’ll tell you that! It’s frequently bizarre, and, ha ha, it’s a time capsule par excellence! And as a bonus, it ends with a couple making sweet love on top of Percé Rock! I’m going to give Loving and Laughing three flexing buttocks!
Posted by Burl at 21:30