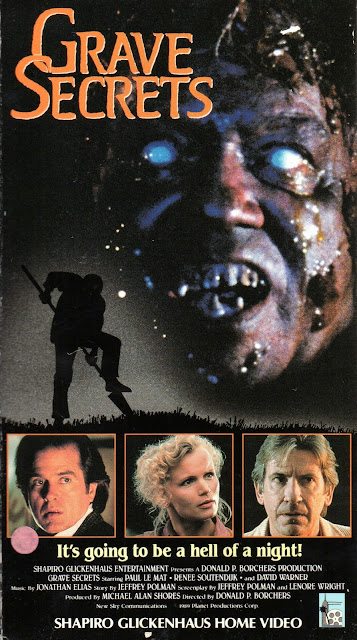 WooOOOoooOOOooo, it’s Burl, here to review a tale of booga-booga from years gone by – from way back in the late 1980s, in fact! It’s called Grave Secrets, and it’s a movie that’s gone strangely unremarked upon over the years! Maybe it’s not so strange, because in fact it would not be unfair to call the picture unremarkable!
Still, it’s a movie with a certain mid low-budget gloss and some recognizable faces, and even a few effective moments, so you’d think it would have some fans! And maybe it does, but they’re just not the types to review movies, which is fair beans as far as ol’ Burl is concerned! Ha ha! In any case, I’ll do my best to let you know whether or not you should put the effort into tracking this picture down for yourself to watch!
Grave Secrets stars Paul “Strange Invaders” LeMat as a tenured parapsychologist and grieving widower! He believes wholeheartedly in ghosts and so forth, and often performs séances so he can speak to them or shoo them away, or whatever needs to be done! He’s like a quiet, small-town ghostbuster, just plying his trade! A mercurial innkeeper played by Renee “The Fourth Man” Soutendijk approaches him and asks for his help cleansing her haunted B&B! Ha ha, but then she changes her mind!
Much of the middle of the picture is Le Mat following her and just hanging around, trying to persuade her to let him tackle the problem! The ghost, in the meantime, turns out to be a big galoot who at one point bedevils Le Mat by sitting on him! And I guess the identity of the ghost – who turns out to be headless, by the way, ha ha! – is meant to be a surprise, so maybe I shouldn’t give it away here!
Well I will anyway, because when are you ever going to see this? The ghost turns out to be Renee’s nasty old dad, a horrible man entirely deserving of the beheading Renee gave him! David Warner turns up briefly as a medium (I thought maybe he was meant to be an aged and mellowed version of Roddy McDowall’s character in The Legend of Hell House - the movie you should be watching instead if you haven’t seen it - but, no) and is later carted off in an ambulance! And then the ghost finds his head (well actually Lee Ving, known from Streets of Fire and Get Crazy, found it first, ha ha!) and reconstitutes into a zombie, I think! But they defeat him using the power of a ghost baby!
It is, as I say, a not-very-remarkable movie in many ways, or rather a remarkable movie in very few; but the headless ghost is not too bad, and there are a few spooky moments scattered here and there! Paul LeMat is pretty bad in it, I’m sorry to say! He’s been fine elsewhere, like in American Graffiti, but here he’s pretty snoozy! And really, in the end, not much happens in this picture, plot-wise! It’s a bit of a blumpkin, and while you could do worse, you could also do a whole lot better! I’m going to give Grave Secrets one and a half deflating head sacks!
Posted by Burl at 21:04