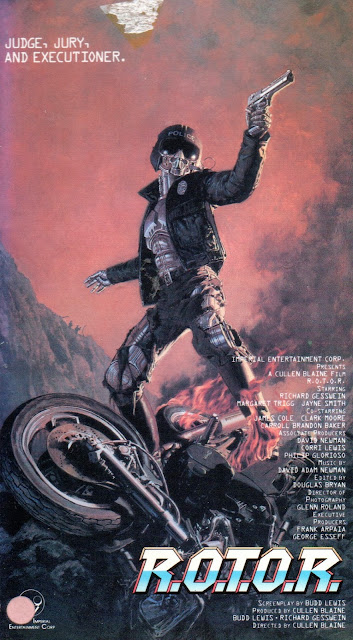 Bee-dee-bee-dee-bee-dee-bee, it’s Burl, here to review another robot picture! Ha ha, this one is called R.O.T.O.R., and it’s one of those pictures the starting point of which was clearly a couple of fellows saying “Hey, RoboCop and The Terminator – those pictures were popular! Ha ha, let’s combine the two into something completely new!”
Except of course it isn’t completely new! In fact, the results are always pretty shopworn when somebody starts with a brain-matrix like that! With R.O.T.O.R. you’ve got to add a really profound filmmaking incompetence to the mix, and spice it with some bizarre and frequently entertaining narrative decisions!
Over a pixilated robot maquette we learn that crime is simply out of control and that robotic policemen stand the best chance of turning the tide! Then we meet a cowboy scientist named Coldyron – ha ha! – who likes to blow up tree stumps on his ranch before putting in a day’s work at the police robot lab! He’s trying to perfect R.O.T.O.R., a vicious, killer cop-bot being covertly financed by shady military-industrial interests!
The robot isn’t ready and won’t be for some time, which angers Coldyron’s boss, the officious Mr. Buglar! It looks like it’s up to Coldyron’s gormless assistant and the assistant’s assistant Willard, another, friendlier robot, to finish the job! But ha ha, nobody reckons on Shoeboogie! Nobody ever reckons on Shoeboogie! But who is Shoeboogie? Shoeboogie is the janitor, a lascivious Red Indian who dances with Willard, tries much too hard to pick up a lady in a lab coat, then accidentally brings R.O.T.O.R. to life by putting his Walkman headphones down in the wrong spot! Zzzzap! R.O.T.O.R. rises from his plexiglass coffin, jumps on his special velvet-rope-quarantined motorbike and gets down to business!
Ha ha, the funny thing is, R.O.T.O.R. looks pretty much like an ordinary motorcycle cop, albeit one with an especially large and ponky moustache! He shoots some people and puts a punching on others, and then fixes his red-tinted sights on one young lady, whom he chases about hither and yon, grimacing in frustration every time she eludes his grasp! Eventually Coldyron and his pal, the very bizarre lady scientist Steele, whose hairstyle might best be described as a snowhawk, marshall their forces and go after the berserk robot!
Well, this is certainly a bad movie all right, and you might even put it into the Ridiculous Action category along with Deadly Prey and Raw Force! It should have been so much more so, though! It’s very slow going in some parts, with shots being held for a lot longer than they ought to have been (like the scene where we look at the top of an escalator for what seems like a full minute before Coldyron and Steele finally appear over the crest of it!), and a momentum-killing repetitiveness to the scenes of the robot stalking the lady!
It’s too bad it’s not a little zestier, but I guess you can’t have everything! It’s still worth a look for the Ridiculous Action enthusiast, and also for the moustache enthusiasts, who must certainly be out there somewhere! I’m going to give R.O.T.O.R. one and a half chainsaws set to frappé!
Posted by Burl at 16:25