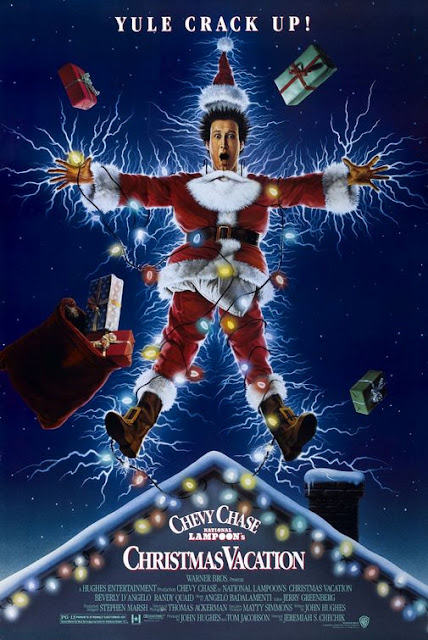 Merry ha ha, it’s Burl here! Yes, I’m here to review a movie that I’d never seen before just the other day: National Lampoon’s Christmas Vacation! Except I think they just call this one Christmas Vacation – maybe National Lampoon didn’t want their name on such a PG-13 movie! It’s the second best Vacation movie I’ve ever seen – but I do have to admit I’ve never seen Vegas Vacation! Ha ha, I hear it st*nks, though!
Naturally Chevy Chase from Fletch stars once again as Clark W. Griswold, a family man with a tolerant wife and two ever-mutating but never-aging children! Christmas time is coming, and Clark is nervous because he’s spent all his money on the down payment for a swimming pool, and if he doesn’t get his holiday bonus, he’ll be in terrible financial trouble! Well, mild financial trouble anyway! This is very much a First World Problem type of picture for the most part, and every now and again you have to take a step back and think “Ha ha! These stakes aren’t actually too critical, are they! Does it really merit a hangdog expression from Chevy Chase and mournful strings from the pen of unlikely composer Angelo Badalamenti?”
Well, no biggie I guess! The main plot is that Clark has always wanted a big family Christmas, and so both his parents and his in-laws (a gang played by John Randolph from Seconds, Diane Ladd from Black Widow, E.G. Marshall from Creepshow, and Doris Roberts from Number One With a Bullet) crowd their way into the house! This leads to a situation exactly like that in Sixteen Candles, also written by John Hughes, ha ha! Then, of course, Special Guest Star Randy Quaid, well known from The Wild Life and The Paper, shows up to fulfill the role of Cousin Eddie, and redneck hilarity ensues!
Most of the movie is made up of episodic episodes that start and then a little while later end to make way for the next one! Eventually matters come to a head when it seems Chevy won’t get his bonus, and so Cousin Eddie kidnaps Chevy’s mean boss, played by Bill Murray’s other brother, the one who wasn’t in Moving Violations, but was in the first Vacation! An unlikely resolution presents itself!
There were some pretty good bits in there! I liked Randy Quaid’s gag about his hair not looking right if his dome gets dented! Ha ha, some of Chevy Chase’s isms were pretty good, though nothing matches the crazy gargle from Fletch! There were some funny bits that were funny because they were bizarre, which is the kind of stuff I like! And I was kind of relieved the kids had virtually nothing to do in this one, ha ha!
I still prefer the first one over them all! That one had John Candy, after all! This one has a pretty impressive cast even so - all the persons already named, plus William Hickey, Juliette Lewis, Julia-Louis Dreyfuss and Mae Questel! I wish it tried harder to be uproarious, but it’s as good a Christmas Vacation as we can reasonably expect it to be! I give it two desiccated turkeys!
Posted by Burl at 09:12