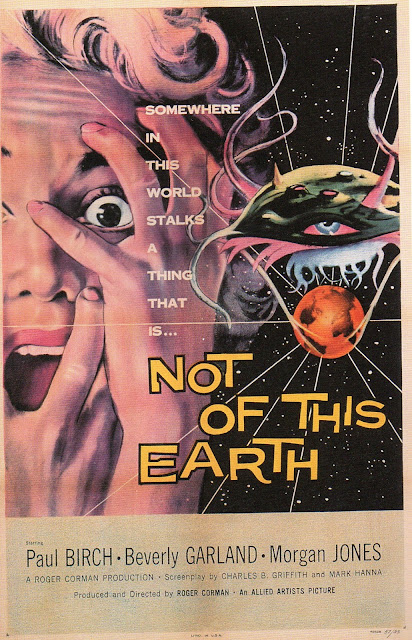 Hello, it’s Burl reporting from the planet Earth! I’m here to review another movie for you, and this time it’s an old Roger Corman classic that I’d never even seen before! Of course I’m talking about that famous picture featuring a portly, Ray-Ban-sporting alien vampire, Not Of This Earth!
It’s a strange and quite affecting little movie! Paul Birch plays the interstellar hemogobbler, whose planet-fellows are dying off of a blood disease! He’s here on Earth to test humans for plasma compatibility in advance of a full-on blood invasion! He sets up house in a Beverly Hills mansion, enlists small-time thug Jonathan “Gunslinger” Haze as his assistant, then hires the great Beverly Garland as his live-in nurse! Slowly she comes to realize the threat this grumpy interloper poses!
For it seems that the alien, Mr. Johnson, can kill you with a glance! All he has to do is take off his sunglasses, peer at you for a moment with his eggy-whites, and he’ll frizzle-fry your brain! Ha ha! He zaps a young lady right at the beginning of the picture, and among his other victims is none other than the great Dick “Carnival Rock” Miller, playing a hep-cat vacuum cleaner salesman who gives Mr. Johnson the hard sell and gets a one-way trip into the furnace for his trouble! Mr. Johnson also invites three hobos over for dinner, but he’s no compassionate Viridiana – he wants those hobos for dinner, ha ha!
Mr. Johnson’s alien accoutrements, all of them built by the late monstersman Paul Blaisdell, include a space radio, a transportation portal by which he sends a wandering Chinaman back for experimentation purposes (although we hear later that the unfortunate Chinaman was crushed to a jelly by the teleportation process), and a flying umbrella that glides in through a window and sucks out a doctor’s brain! Eventually a goofy cop gets in on the action, there’s a car chase, and the vanquished Mr. Johnson ends up getting his very own gravestone in the middle of Griffith Park – just as, in the background, another sunglasses-sporting individual strides towards the camera, presumably to continue Johnson’s important work!
Ha ha, this is a little gem! It has a nice noir-ish look to it, thanks to cinematographer John Mescall, who shot such classics as Edgar Ulmer’s The Black Cat and James Whale’s great Bride of Frankenstein! But they say he harboured a taste for the grape, so Mescall never really got the chance to live up to the talent he so manifestly possessed!
The performances are good too, particularly Beverly Garland’s, and Corman seems to have put a little more effort into this one than he sometimes did in his pictures! Apparently he got into a fistfight with Paul Birch at some point, and Birch walked off, and this is why there are numerous scenes with Ed Wood’s chiropodist doubling for the actor even though the two looked nothing alike! But the real selling point to this picture is of course the great Dick Miller, and his presence alone, brief as it is, makes Not Of This Earth an absolute must see! I give it three compacted Chinamen!
Posted by Burl at 11:35