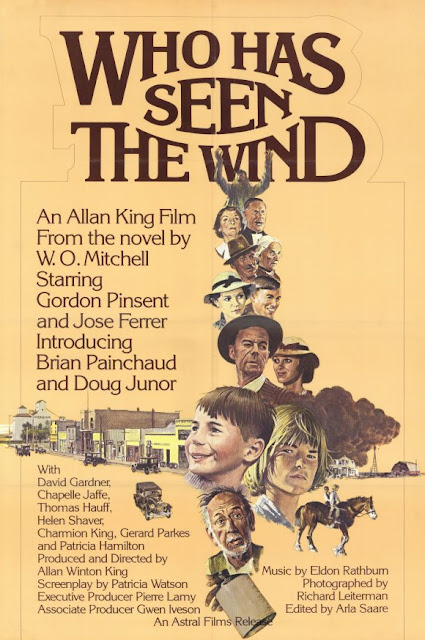 From out on the windy prairie, it’s Burl, here to review some coming-of-age Canadian cinema! Ha ha, this is the sort of movie Canada did really well in the 1970s, and the wintery, Francophone version of it would be the excellent Mon Oncle Antoine! But films like this were not considered very cool while I was growing up – they were the sorts of things occasionally shown in classroom situations, movies to be endured rather than enjoyed! Ha ha, I remember a class outing to the cinema to see one called Mario! But it turns out that some of them, perhaps even most of them, possibly even all of them, are really good! Case in point: Who Has Seen the Wind!

This is exactly the kind of movie that, done wrong, would instantly become what my pal Evan calls “Canadian with a K!” Fortunately it was done right, ha ha! It’s all set on the plains of Saskatchewan in dust bowl times, and of the massive cast of characters, the one hewn closest to is a ten year-old boy called Brian O’Connel, played by Brian Painchaud in one of the best kid performances I’ve ever seen! Sadly, young Painchaud died aged only twenty, so whether he would have been a good adult actor too will always be unknown!

All the kids in the movie are really good! A very Sammy Snyders-esque youth, Douglas Junor, plays The Young Ben, a mostly silent lad with a blonde bowl cut; a figure of pathos and mystery for much of the picture! His father, The Ben, is played by the movie’s requisite superstar American import: none other than José Ferrer from The Sentinel and Dune! Ha ha, it’s amusing and unusual to see the cultured, Puerto Rico-born Ferrer playing a rough-hewn slab of prairie hardtack: the local brewer of illegal moonshine whose still blows up in the church basement and who keeps a caged owl both as a hard-won pet and as the movie’s principal figure of obvious symbolism! Who knows why the caged owl hoots, ha ha!

As you’ve probably figured out, the picture is a tapestry of life in this small Saskatchewan town, as seen largely but not exclusively from the perspective of Brian! The large number of characters, played by a large number of familiar Canadian actors, include a kindly school principal played by Thomas Hauff from Millennium and Bells; a nasty schoolteacher played by Patricia Hamilton, who later was the ill-fated Mabel in My Bloody Valentine; pious jerk Reverend Powelly, a vaguely Norman Fell-ish presence played by David Gardner, the detective from Prom Night; old bitch Mrs. Abercrombie, essayed by Charmion King from Shadow Dancing and Last Night; Dr. Svarich, the town sawbones, played by Cedric Smith, whom we recall as Gary “The Blacksmith” Black in Fast Company; and others, like a philosophy-disdaining shoe salesman, an unctuous barber/mayor, a Chinese family, and a bible-crazed prairie hobo who dwells in a sturdy piano box! And Les Carlson from Black Christmas and A Christmas Story appears just long enough to drive a cart and sing a scatological horse song!

Brian’s dad, town pharmacist Gerald O’Connel, is a nice guy played by The Rowdyman himself, Canadian icon Gordon Pinsent, known internationally from pictures like Blacula and The Thomas Crown Affair; and from the first moment we see him, buttoning up his shirt after a doctor’s examination, we know he’s doomed! “Is it true your dad turned yellow?” Brian’s friends are soon asking him! Brian’s mom is Chappelle Jaffe from Terminal Choice and The Dead Zone, and her big moment comes in facing down the nasty schoolteacher who punished Brian by making him hold his arms up for hours, until he faints!

The replacement schoolteacher, Ruth Thompson, is played by Helen Shaver from Starship Invasions, and she’s much more pleasant than the sadistic one lately booted from the position! But in a pattern established early in the film, nothing good can happen for Brian without something bad following it up! After his dad – kind, beloved, but not much use in discussions about feelings – dies, Brian goes to live with his salty-tongued Uncle Sean, a role for Gerard Parkes, who also played an uncle in Isabel and was a cop in Spasms! Sean’s hired limpy-man, Ab, is essayed by Hugh Webster from Rip-Off and Between Friends!

The movie seems to be about life and death; imprisonment of various kinds and the necessity and the means of escape; culpability, blame, and forgiveness! It’s a lot to fit into 103 minutes, especially when you consider the very many characters, the general eventfulness of the film, and the need for a climactic, near-disastrous windstorm! The picture is impressively put together, nice-looking, well-acted, understated, and real! The musical score is not bad, but it’s too bombastic, and too often tries to comment on the action in a film that everywhere else resists melodrama! A warning, however: this movie is not for gopher lovers! I give Who Has Seen the Wind three one-way train rides to the Mayo Clinic!
Posted by Burl at 01:27