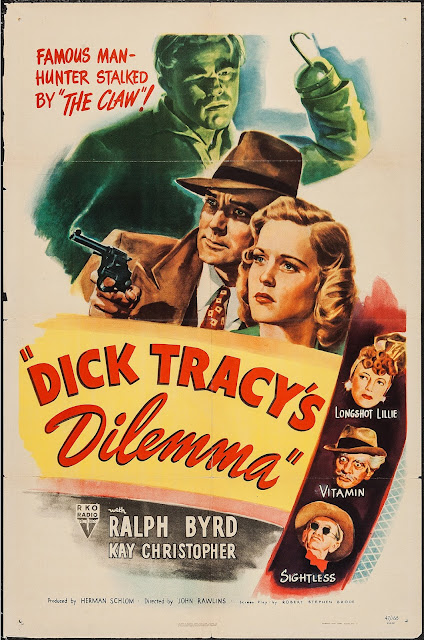 Calling all cars, it’s Burl, here with a review of a Poverty Row detective story from days gone by! Ha ha, I recently found four VHS tapes of the old Dick Tracy movie series, and because they’re so nice-looking as a set - as you can see from the photo! - I bought ‘em all! Well after all, like the movies themselves, they didn’t cost too much! And for whatever Burlean reason, I decided to watch the last one first, so here’s a review of Dick Tracy’s Dilemma! 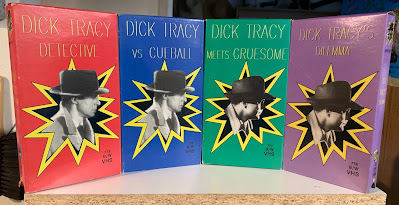 And what a dilemma it is! As the picture opens Dick is just going about his usual sort of business: hassling a bartender at a place called The Blinking Skull in the company of his partner Pat Patton, a loyal semi-bumbler who often rushes in to things without thinking; and breaking dates with his gal Tess Trueheart, which he does on the reg if this movie is any indication! Then an Irish beat cop phones in a report of shenanigans down at the fur warehouse, and Tracy and Patton are on the case! After all, as we saw in a prefatory scene, a foolish security guard has been murdered - clobbered by a hulking fellow with a steel claw where his right hand used to be!

This clawed fellow, known of course as The Claw, is the picture’s novelty bad guy, but he’s not the only heavy! There are two other members of the fur robbery gang, and then there’s the insurance scam angle, which puts the fur company owner up against Mr. Premium the insurance man and his dogged investigator! It takes Tracy quite a while to sort all this out, and though he does manage to puzzle out some clues half-given by the incompetents who surround him, I can’t say I was very impressed with Dick’s field game! Ha ha, he arrives at a place he suspects a hot fur deal will go down, and instead of watching from around the corner he just drives his big car right into the middle of where it’s all supposed to happen, and so of course the criminal gets away! This kind of thing happens more than once!

Ralph Byrd from Moontide plays Tracy, as he had before and would again! Lyle Latell from Beginning of the End is Pat Patton, Jack Lambert from Force of Evil is The Claw, and Ian Keith from It Came From Beneath the Sea makes an impression as Vitamin Flintheart! Vitamin is a retired, velvet-coated, cigarette holder hambone who proves his flintheartedness by turning away poor Sightless, the faux-blind beggarman who pokes out a knothole and listens into the gang, and is pursued by The Claw down shadowy alleyways for his trouble, and of course doesn’t fare so well in the end! Ha ha, Vitamin later has to impersonate Sightless in order to spy on the gang, so I guess that’s him paying a kind of penance! And speaking of impersonations, at one point Pat Patton has to make a hundred phone calls while pretending to be The Claw, and that’s pretty funny too! And of course the whole thing wraps up with Dick being a dick again and breaking a date with Tess!

It’s not a bad little programmer! Tracy’s a stiff of course, but that’s what he’s always been! Poor Tess is a real nothing of a part, insultingly so for poor Kay Christopher who had to do this bit! But in other ways it’s enjoyable: some nifty suspense in the scenes where The Claw stalks his victims, a bit of B-movie brutality, a great neon sign for the Blinking Skull, and a weird comedy relief character in Vitamin! The sixty-two minutes just fly by! You can’t have my nifty little VHS collection, sorry to say, but you can watch these movies any time you want on the you tube! And maybe you should! I give Dick Tracy’s Dilemma two dropped pencils!