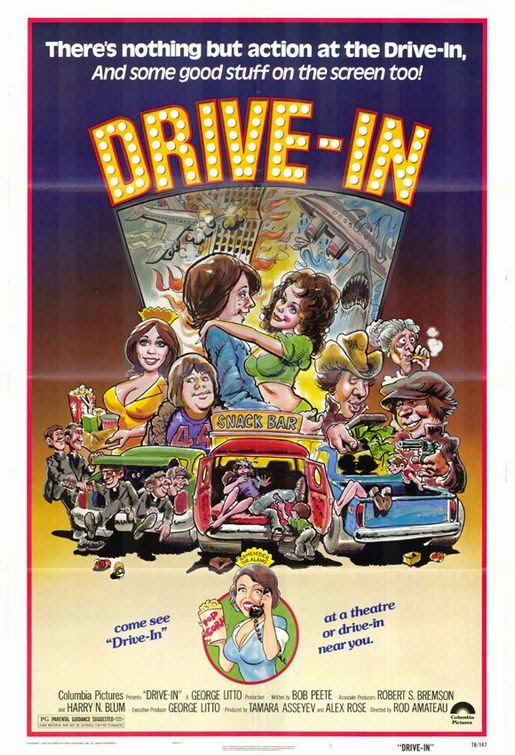 Dancing like a hot dog wiener, it’s Burl, here to review a picture for you that exemplifies the 1970s as much as any movie I’ve ever seen in my life! Ha ha, the picture is called Drive-In, and of course much of it takes place at the titular institution, but not all of it!
It’s your basic one-night-in-the-life-of-a-small-town movie, like Hometown U.S.A. or any number of others – the sort of picture, in other words, that probably wouldn’t have been made had it not been for American Graffiti, though this one isn’t a nostalgia piece, or at least wasn’t intended as such when it was made! Now the fact is that I like this sort of picture, so I was predisposed to thinking kindly upon this one; and I like intentionally plotless movies, which is a feature Drive-In has in common with Malibu Beach and other favourites; and on top of this I like the 1970s, perhaps because the decade is so far back in the rear-view mirror!
Let me tell you, Drive-In has one of the densest and most concise collections of Seventiesania I’ve ever seen on film! You’ve got your drive-in, of course (not an exclusively 70s institution, but one which fits very comfortably within that decade); and you have a long scene at a roller rink with plenty of great roller rink details; and we have boogie van culture richly represented; and best of all, the movie playing a the drive-in this night is Disaster ’76, a fine send up of the Airport pictures and The Towering Inferno and The Poseidon Adventure and Jaws! (There are several Jaws references in Drive-In, actually, ha ha!)
As mentioned, there’s no plot to tell you about, but there are characters! The most like a protagonist is Orville, an average-guy ginger in the tradition of R. Howard, and strongly anticipating your Gary Hershberger types who would come along later on in pictures like Paradise Motel! Orville’s tubby brother is played by Engelberg himself, from The Bad News Bears! There’s a pair of very small-time crooks played by Trey Wilson (Nathan Arizona from Raising Arizona, don’t you know!) and a guy I thought must be Lou Perryman from Last Night at the Alamo, but turned out to be Gordon Hurst from The Sugarland Express! There’s Glowie, the young lady who’s taken a shine to Orville now that she’s dumped the unpleasant Enoch, the stringy-haired big boss of the Widow Makers, a violence gang with a fondness for orange windbreakers! Ha ha, a run-on sentence is the only way to get all these characters in!
There are many more too: a doctor and his wife, a fellow who wants to marry his girl, a nasty theater manager, some other ladies, a whole other gang called the Gear Grinders, a fetching young candy-counter lady, and others upon others, and that’s not even counting the characters in Disaster ‘76! Ha ha, most of these people speak almost entirely in homespun idioms, which is a big part of the movie’s charm! Another part is the great songs, which are over-used perhaps, but well-chosen! You can't beat the Statler Bros.' "Whatever Happened to Randolph Scott?" Ha ha!
Let me tell you, like Last Night at the Alamo, Bottle Rocket and Fandango, this is one of those little pictures that make you think fondly of both Texas and Texans - a mighty achievement! The movie is so easy-going for most of its length that you just want to hug it and thank it for being so kindly! There’s a little too much plot intrusion toward the end – the would-be robbers making their move, the gang warfare heating up and so forth – but for the most part this is one of those pictures you gently absorb rather than watch!
It’s a ten-bug picture as far as ol’ Burl is concerned, and a great watch! You’ll probably be able to find a copy if you try a little bit, and ha ha, I urge you to do so! I’m going to go ahead and give Drive-In three Texas Chainsaw Massacre posters and my most Burlian recommendation! And watch for the scene of the burly Hell's Angels observing a punch-up between Orville and Enoch! "Gang violence," one of them says! "It's frightening," another says mildly! Ha ha!
Posted by Burl at 16:48