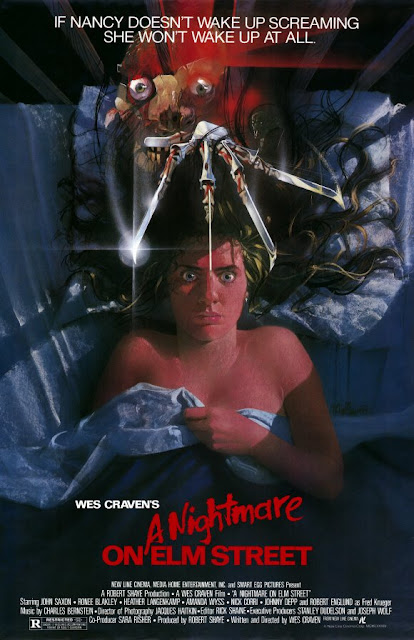 Ha ha and hello! It’s Burl with an olde-tyme favourite, which I watched the night before Halloween, thinking “It’s time to revisit this old bean, now that Wes “Deadly Friend” Craven has departed us! Too early, it seems!” Of course the picture I’m talking about is the original, home-grown A Nightmare on Elm Street!
Now I was never a big huge fan of the Fredster, though I certainly enjoyed seeing A Nightmare on Elm Street 3 at the cinema, and  I guess A Nightmare on Elm Street 2 had some laughs sprinkled like cheap birdseed throughout! A Nightmare on Elm Street 4 is another picture I saw in the cinema, though now I can’t remember the first thing about it, except that it was pretty silly! Ha ha, and I always thought this one, the original, was a pretty good movie!
And I still think so, though one of its lapses in logic seemed to me now such a cromite that I found myself puzzling over it for a while! Now, I’m not here to pick apart the film’s logic, it’s only this one thing I’m going to mention! But really, a maniacal janitor killed twenty kids in the neighbourhood within fairly recent memory, and none of these teens has ever heard about it? I call faddle!
Anyway, the rest of it is perfectly logical, ha ha! The murderer in question, Fred Krueger, was released on a technicality, and the neighbourhood parents tracked him down and had a little fry-party! Then, some years later, Fred gets up the mojo to start appearing in the dreams of the neighbourhood’s surviving kids, and proves himself able to administer fatal pokings from beyond the veil of Phobetor! Yikes! Watch out, kids!
Well, poor Nancy is the hero of the piece, and I say poor Nancy not only because she’s run through the wringer in the course of the photoplay, but because she’s played by Heather Langenkamp from Star Trek Into Darkness, who, I’m sorry to say, has never struck me as a very good actress! Luckily her dad is an iron-nosed cop played by John Saxon from Fast Company and Blood Beach and Welcome to Spring Break and Black Christmas, and that makes up for a lot! Ha ha! And her mom is Ronee Blakely from A Return to Salem’s Lot, which is kind of an odd casting choice if you ask me, but it works out reasonably well!
Nancy’s pals are Tina, played by Amanda Wyss from This House Possessed, Rod, essayed by Nick Corri from Gotcha, and Johnny Depp from Private Resort! They’re all fairly doomed, and it’s up to Nancy to take the fight to Fred, and to make a series of elaborate booby traps in about two minutes! Ha ha, she has exploding lightbulbs and swinging sledgehammers – the works! And it all seems to do the trick, except for the producer-mandated nonsense-shock ending! Ha ha, you can almost hear that producer whispering "Remember Carrie?" in poor Wes's ear!
I like to watch these things as though I’m just seeing them for the first time, and Fred Krueger was not the Catskills boogeyman he later became, and it’s just another low-budget 80s horror picture! That’s easier said than done of course, but the upshot this time around is that I was impressed with the movie, and found it imaginative and effective! It’s still goofy and not really that scary, but beneath all that the movie has a seriousness of purpose that endeared me to it! There are some fine moments throughout, like Nancy’s schoolroom dream and the death of her pal Tina! The trick effects are superb, and it’s altogether very well put together! Ha ha, I give A Nightmare on Elm Street three telephone tongues!
Posted by Burl at 21:26