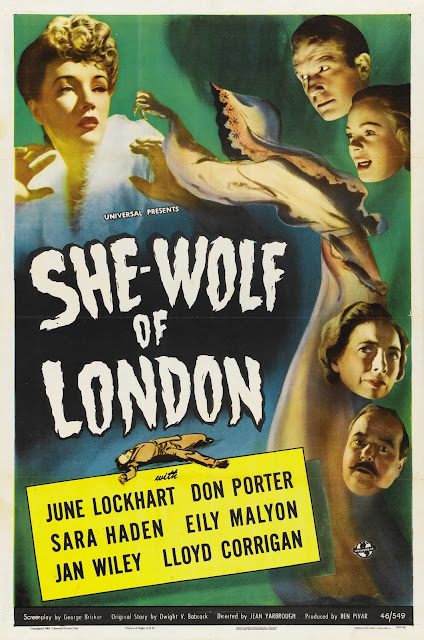 Ralston-Purina, it’s Burl, ha ha, here to review you a she-wolf picture; and right off the top I want to let you know that I’m going to tell the ending! Ha ha, yes, the ending of today’s picture, She-Wolf of London, features a twist! It’s one that I didn’t bother trying to guess, because I never really try to guess, but when it came along after sixty-one chatty minutes, I couldn’t say I was surprised!
Well, dateline London! A fragile young heiress lives in a big house with an aunt who isn’t an aunt, a cousin who isn’t a cousin, and a jolly but slow-on-the-uptake maid! I can’t recall why they all live together or what the relative relationships are, but all these things are explained, I believe! The ersatz aunt is a real old sobersides, and boy howdy, the cousin is pretty!
Our heiress, played by June Lockhart from Strange Invaders and Curse of the Black Widow, is troubled, because the house is next to what must be a really enormous park, and within that park something unnatural is prowling, putting a fatal scritchscratch on anyone foolish enough to be wandering this Yellowstone-sized park at night!
Because of The Allenby Curse, the heiress – who bears the distinctly un-heiressy name of Phyllis – assumes she herself is the culprit! Circumstantial evidence – blood on her hands, mud on her slippers – confirms the suspicion, and Phyllis isolates herself in her chambers and refuses to see her young lawyer fiancée! Ha ha, the fiancée, Barry, is played by Don Porter from White Line Fever, and here he is, young!
I hope you’ve realized what’s going on! It was a real disappointment for me, I can tell you! Because there’s no she-wolf! No, of course it’s the maniacally status-seeking aunt, donning Phyllis’s shawl and putting the chop to police and civilian alike! Even Martin Kosleck, whom you might know from The Flesh Eaters, gets roughed up by the old gal!
It’s too bad about The Allenby Curse, or Phyllis wouldn’t have fallen for it! Ha ha, I wonder if my old high school chum Bruce Allenby suffered from The Allenby Curse? He never mentioned anything about it! Anyway, I really think they should have done a double twist, where Phyllis really is a werewolf, but it required a shock so great as Aunt Martha has delivered to set off the transformation! Ha ha, that would have been a great ending!
I found the movie similar to Crimson Peak in some ways! As with that picture, it all comes down to a womano-a-womano fight and a climactic bonking! Although here, ha ha, the day is saved not by the heroine’s shovelsmanship, but by a clumsy accident! Ha ha, the pursuing Aunt Martha, waving her knife, simply trips and falls, and it’s altogether less like the climax of a horror-mystery and more like a scene from an educational film on the importance of safety in the home!
Sara Haden from Mad Love plays Aunt Martha, and she does a pretty good job! Everyone else is adequate, with Kosleck’s Lorre-like performance a bit of a bright spot! The movie looks pretty good; not as nice as the top-drawer Universal horror pictures, but better than the PRC stuff, like The Devil Bat, made by the same director, Jean Yarborough! There are a couple of effective moments (the inspector’s death-shuffle, for instance), but it’s mostly disappointing and lacklustre! Altogether, and factoring in the disappointment, I’ll give She-Wolf of London one and a half lanterns hung at the window!
Posted by Burl at 23:22