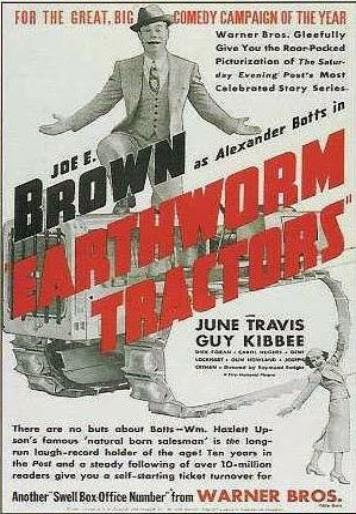 Ha ha, vroom, it’s Burl, here to review a movie about earthworm tractors! And what’s the picture called, you may ask? Of course it’s called Earthworm Tractors, because that’s what it’s all about! Yes, they made a whole movie about earthworm tractors, and along with all the earthworm tractors, they managed to stuff a little comedy and romance in there too, ha ha!
Strike that, a lot of comedy, both successful and merely attempted! The star is everybody’s pal, Joe E. Brown, whom we all know best from, let’s face it, The Comedy of Terrors! (And also from Some Like It Hot, ha ha!) In one notice I read, Brown was described as having  “a mouth like a satchel,” and that image stayed with me through the whole of Earthworm Tractors, with me thinking that at any moment Joe was going to pry open his enormous piehole and pull out some Western Union correspondence!
The plot involves Joe E. Brown as Alexander Botts, who, as he proclaims about ten thousand times, considers himself “a natural-born salesman!” But he’s just selling doohickeys, which impresses neither his putative fiancée nor his would-be father-in-law-to-be (who is played by that old familiar face Olin Howland, famed from Them! and The Blob)! Ha ha, so Botts goes off to find something bigger to sell, and settles on earthworm tractors! But because he’s a thoroughgoing idiot, the captains of industry who run the earthworm tractor factory are dubious about hiring him on, and the more so when Botts takes as his target the most notoriously unlikely earthworm tractor customer in the whole Midwest, Mr. Johnson!
Mr. Johnson is played by Guy Kibbee, whom we all know from Captain Blood, and my, he and Joe E. Brown were a pair of daring actors! The escapades of this picture require both thespians to ride an earthworm tractor as it trundles up, down and over all manner of obstacles, and the likelihood of one or both of them being bucked off and churned up beneath the tractor’s metal treads seems dreadfully high!
But soon Botts is romancing Mr. Johnson’s daughter and pulling his house around with an earthworm tractor (a comic highlight!) and generally causing all manner of earthworm tractor-based mayhem, while incessantly flapping his pouch-like anterior orifice! Ha ha! The climax involves Botts and Johnson riding an earthworm tractor through a blasting quarry, with all kinds of explosions and hair-raising near-misses on offer!
The stunt work in this picture is pretty impressive, especially for a little low-budget comedy! Joe E. Ross appears to have been quite a competent earthworm tractor pilot, too, and really a very gifted physical comedian! Ha ha, his salesman mannerisms, as when he strokes his lapels, are priceless! And many of the earthworm tractor gags are funny too! It’s a disposable goofshow of course, but I quite enjoyed Earthworm Tractors, and I’m going to give it three sinking tuffets!
Posted by Burl at 21:51