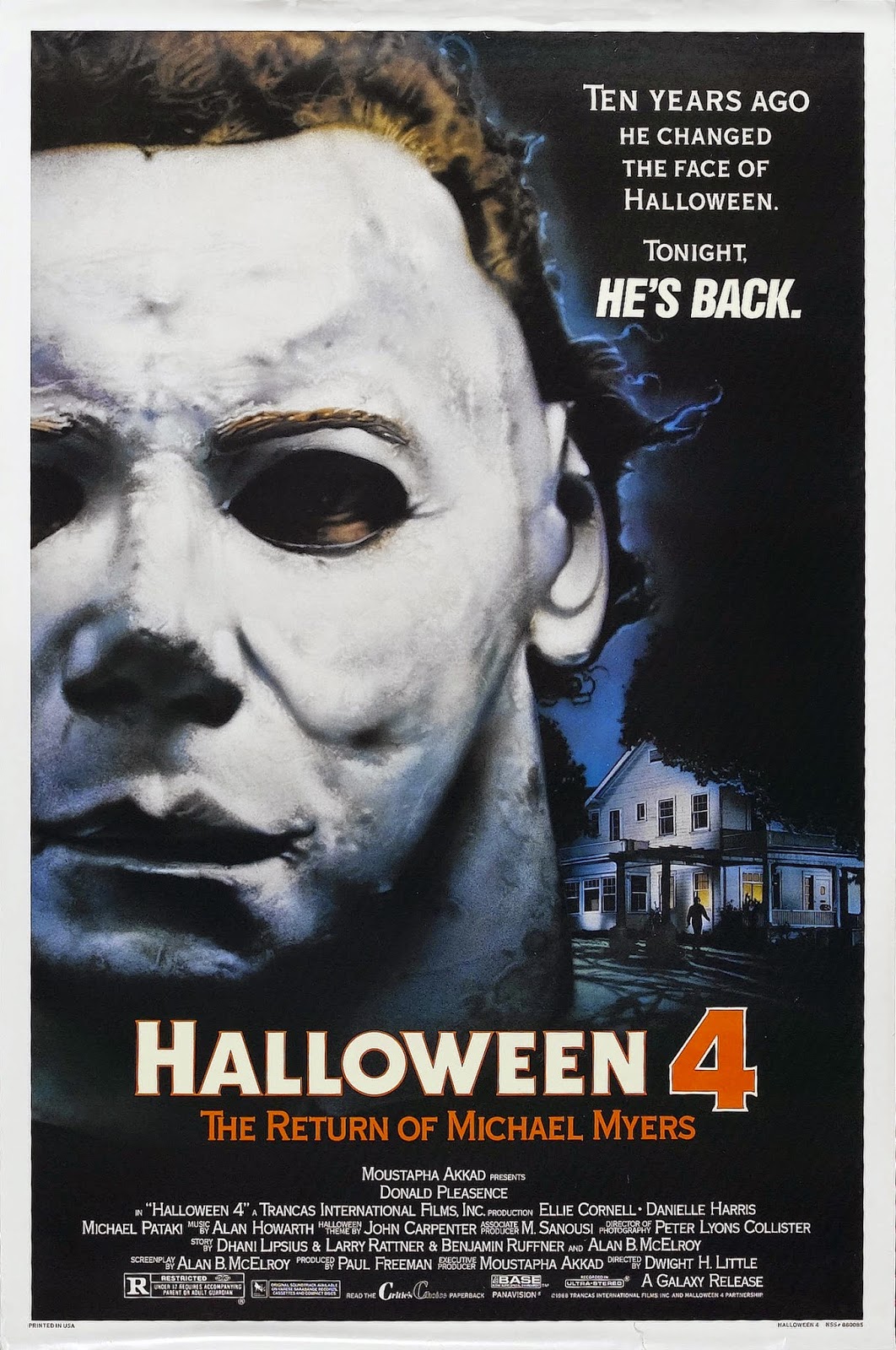 Ha ha, trick or treat, it’s Burl at the door! Boy, it’s certainly getting close to Halloweentime, and to bring on the spirit a little bit I thought I’d watch one of the Halloween pictures I haven’t seen in years, Halloween 4: The Return of Michael Myers! I was a little confused going in, because I thought this one had lots of goofy backstory and druids running around, and the psychic visions that do their best to ruin any slasher picture, as we know from The Initiation and Sorority House Massacre!
But I think all the weird mythology of this series is packed into episodes five and six! This one is a little more like Halloween and Halloween II: lots of talk about Michael Myers’s inhumanity, but more or less a straight up, relatively dry slasher picture! Halloween III: The Search For Michael Myers is of course ignored, which is too bad because it would have been nice to see those mythologies mixed together; and for those casual fans who maybe haven’t seen the first two pictures in a while, the whole story of Michael to date is blurted out by a nerdy security guard! This prompts the thought “Ha ha, surely there must have been some other way to deliver this information!”
Michael is being transferred somewhere for some senseless reason, but Dr. Michael Pataki, from The Bat People, is glad to get rid of him! Of course Michael wakes up from his coma, pushes his thumb through a guy’s forehead and begins killing his way toward Haddonfield, with Dr. Loomis waddling close behind! The masked maniac, it turns out, is after a little girl, his niece, and his reason for this pursuit, whatever it might be, is treated as though self-evident and so never disclosed to the rest of us! Ha ha! But there are plenty of people to kill along the way, so Michael gets busy with his kitchen knife and some of his best shock-wrestling moves! Soon Loomis, who is of course once again Donald Pleasance from Prince of Darkness, and Sheriff Beau Starr from Fletch are running the masked man all over Haddonfield! Ha ha!
There’s a supporting cast of vaguely familiar faces, like Carmen Filpi from Garden of the Dead; Sasha Jensen from Dazed and Confused; Kathleen Kinmont from Fraternity Vacation; and Gene Ross, who faced an iconic slasher before when he appeared in Friday the 13th part 4! So it’s nice to have these people scattered throughout, and just as comforting are the bursts of score from the original picture! The mask looks as creepy as ever, and we also get a very nice opening credit sequence (kudos to the second unit, ha ha!), some pretty good bits with a mob of town louts right out of Silver Bullet, and a genuinely disturbing finale!
Those are the good points! But there are plenty of dull stretches, dumb dialogue and stock characters, so it’s hardly a masterpiece! But on the whole it was a better picture than I remembered, and not a bad pick if you want a bit of autumnal atmosphere! Ha ha, it’s a bit like The Devonsville Terror in that way – a crouton for the most part, but an evocative one! There are even a couple of Special Makeup Trick Effects, which the first Halloween didn’t have, as good a movie as it otherwise is! The thumb in the head is one, and then there’s a bit of a face-ripping, ha ha! The rest is stabbings and suchlike, and a few pretty stiff neck twists! (Of course there’s some putty on Dr. Loomis’s face and on Michael’s hands, and I guess those putties count as Special Makeup Effects too, ha ha!)
It’s an okay picture, I guess, and there’s really not much else to say about it! I enjoyed it while it was on, except the parts where I was bored, and I’m going to give Halloween 4: The Return of Michael Myers two ponky deputies!
Posted by Burl at 23:35