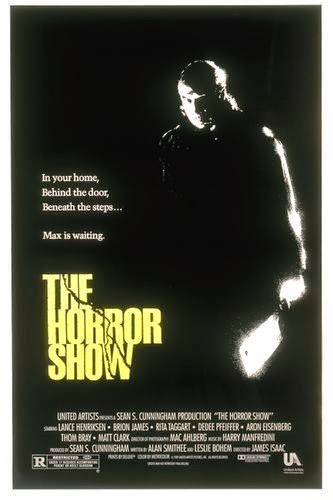 Once again, and without prejudice, it’s Burl! Ha ha, yes, this unplanned trek through late-80s horror continues with a picture I think I’ve seen before, many years ago, but all I could remember of it were the stills printed in Fangoria magazine! And, ha ha, the funny thing is that almost none of those moments made it into the heavily cut final version of the picture!
The movie’s called The Horror Show, and it was sort of the poor cousin to that same year’s Wes Craven extravaganza Shocker, or like a grindhousy version of The First Power! It’s got some mainstays in the mix, like Lance “Nightmares” Henrikson in the role of the haunted cop, and of course Brion “Blade Runner” James, well known from his role in Armed and Dangerous, as Max, the cleaver maniac! What happens is that Henrikson and his partner, played by Terry Alexander (whom I didn’t even recognize as being John from Day of the Dead), close in on Max as he’s just hacking his way through the warehouse district or something, and, after the poor partner gets the chop, Max is somehow captured!
Well, it’s Old Sparky for him, ha ha! The putative execution is easily the movie’s best scene, but it turns out that Max has been practicing with a home-built electric chair, and somehow uses the voltage to turn himself into electricity! (Ha ha, great plan, but what if they’d used drugs to kill him?) All of this background comes from the picture’s most unforgivably silly character, a weird young professor played by the weird young professor from Prince of Darkness, Thom Bray! (Was he from Simon & Simon or Riptide? Either way, I always think of him as the Buddy Love to Eddie Deezen’s Julius Kelp!)
The electric Max, whose powers and limitations are never really discussed (though the weird professor suggests a method of stopping him which then is never really used, ha ha), begins a campaign of terror against Detective Henrikson and his family! His realistic-looking wife, played by Rita Taggart from Go For Sisters, inured to strangling simply by being married to him, catches a ghostly chopping from Max, who seems to reside mainly in the family furnace! Deedee Pfeiffer from Moving Violations and Vamp plays the teenage daughter whose boyfriend gets bisected (material you’ll only see in an old Fango, ha ha), and Matt Clark, a guy who seems very familiar to me every time I see him, and who was in Pocket Money and lots of other pictures, is the ineffective police therapist!
There’s even a very cursory appearance from Lawrence Tierney, well known from Junior and Silver Bullet! So you can’t fault the cast! But the movie, which, like Bad Meat and The Long Ride Home, was a Troubled Production, I gather, ha ha, doesn’t make much sense, and spends a lot of time being one of those Freddy Krueger “anything weird can happen” type of pictures, which have never been my favourites for some reason! But the tone is interesting: it somehow has one foot in grim, but the other straddled way over in cartoonland! It’s an impressive feat of acrobatics at least!
Too bad so much of the gore was cut out, because that might have helped! I’ll tell you, a lot of people think this is a hambone classic, endlessly entertaining, but I got a little bored with it! It has a weird TV-sitcom ending that keeps threatening to turn into a sting, but rather charmingly never does! Ha ha, I liked that! Still not a very good movie though, and I’m going to give The Horror Show one Jenke-faced turkey!
Posted by Burl at 22:33