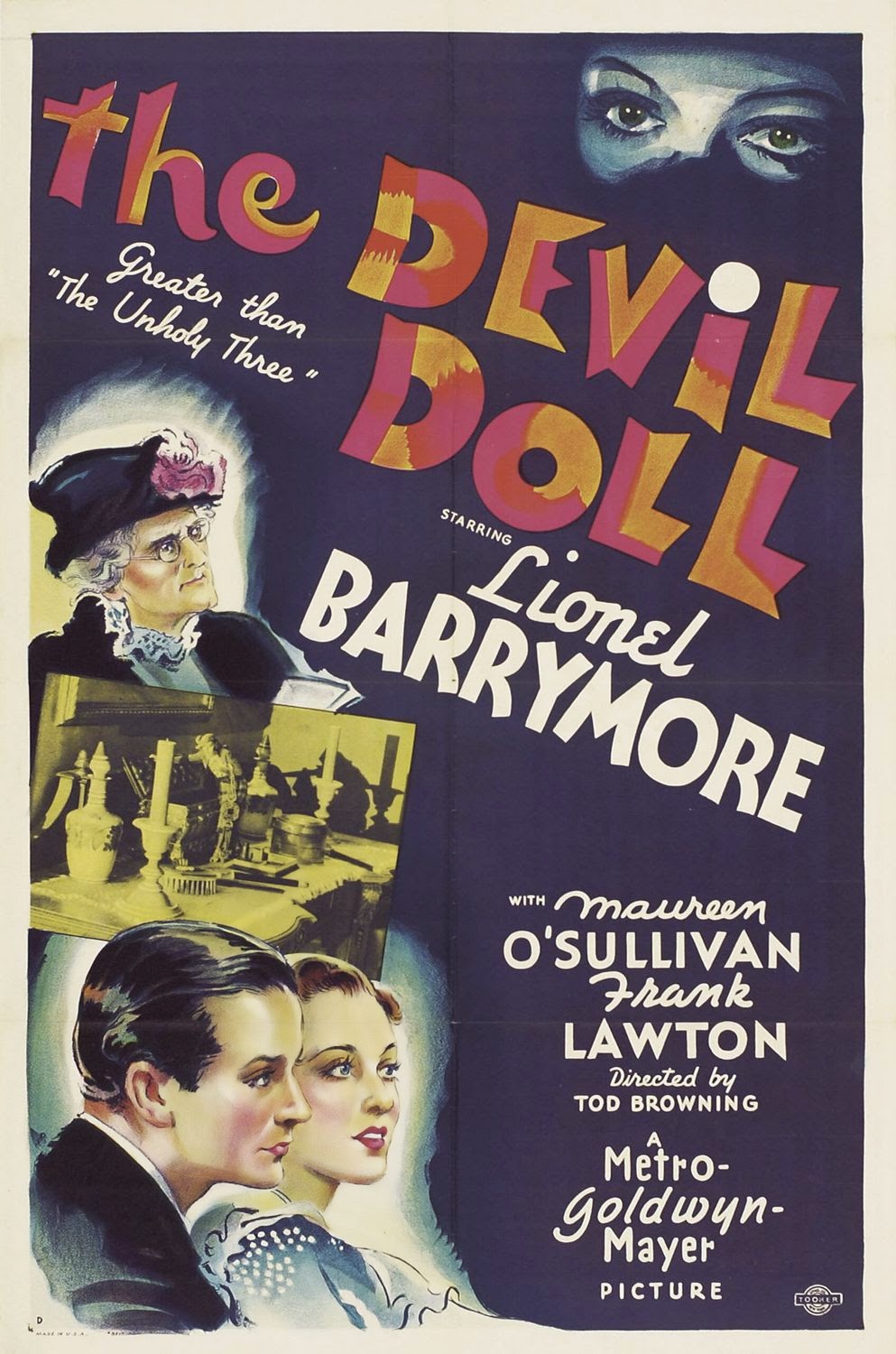 Eh bonjour, c’est Burl! Hà hà, the picture I wanted to tell you about today is The Devil Doll, which is to say the old Tod Browning one, not that spooky British cheapie from the early 60s! This one is typically eccentric for a Browning picture, featuring as it does a vengeance-crazed Devil’s Island escapee donning old lady drag in an absolutely batty plan to get satisfaction from the bankster blackguards who lied and killed to put him behind bars!
The murderous ex-banker is played by Lionel Barrymore, who was also in Browning’s Mark of the Vampire! Ha ha, his Hal Holbrookian voice is not very Parisian (which all the characters are supposed to be), but his performance is a cured-ham delight, particularly when he’s dressed up as old Mme. Mandelip!
Let me back up a bit: Barrymore’s character, Paul Lavond, busts out of Devil’s Island with a chum: an ailing old scientist with a bonkers idea to save the world from the hassles of overpopulation: shrink everybody to one-sixth their size! Ha ha, the idea is that there’s a lot more food for us! But the plan neglects to take into account the problems of raising and slaughtering, say, a cow as big as a double-decker bus! Or how to fish for a tuna the size of a small submarine! Ha ha, what about all the houses? The clothes? The machines? The cost involved in replacing all of this, even if smaller, would be astronomical! And who goes into the shrinking machine first, and who last? Wouldn’t there be gangs of stubborn giants roaming the world? Or is everyone compelled to be miniaturized? That sounds unworkable!
Ha ha, you can see I’ve put some thought into this! But this bizarre plan is only a small part of the picture – the real crux is Barrymore’s revenge against the confederacy of bunces he blames (correctly) for ruining his life! When he sees that the old scientist can create doll people controllable by mental impulses, he gets an idea that’s only slightly less bonkers: assume the persona of Mme. Mandelip, an old lady who makes hyper-realistic dolls; sell a doll person to his enemies, then have the doll person poison the enemy during the night! Robert Greig from Tower of London plays the chief enemy, and he gets a poking whilst in his bed – a poking from which he’ll never recover!
Meanwhile there’s drama with the now-deceased scientist’s wife, who is a sort of cross between the Bride of Frankenstein and Igor, and who wants Barrymore to help continue her husband’s kookywork! Barrymore, however, only wants revenge, and then he’ll have nothing to do with miniaturizing the world! And of course there’s Barrymore’s daughter, played by Maureen O’Sullivan from Too Scared to Scream, and who believes her father to have been a crook and a murderer and hates him for it; and her romance with a penurious cab driver! There’s a marvelously melodramatic ending to cap it all!
That’s a lot packed into a short running time, and, perhaps as a result of this there’s a lot of weird atmosphere in the movie; very indistinct, though! Hard to pin down! But one thing worth pointing out are the excellent special effects, and in particular the amazing oversized sets built to show the homunculi in close-ups! Wow, ha ha! Maybe the movie could have used a few cigar-chomping midgets disguised as babies, but you could say that about most movies! I give The Devil Doll three stricken bankers!
Posted by Burl at 22:32