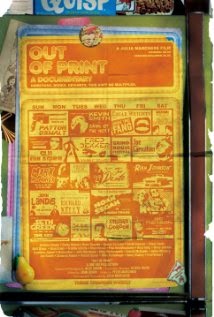 One please, for Burl! Ha ha, I was just pretending to be a movie patron there, in preparation for reviewing a new picture I just watched – a documentary called Out of Print! Ha ha, now this is a funny sort of movie: pretty much a personal essay in the form of a ninety minute doc! If it was a subject I was uninterested in, it might have been intolerable! But the picture had me from the very beginning and kept me interested all the way through!
Have you ever been to the New Beverly Cinema in Los Angeles, California? I have, but only once – in fact, that’s where I saw Innerspace! I can tell you that if I lived in L.A., I’d go there all the time! Ha ha, I might well have ended up in this very film, talking about how much I enjoy attending films at the New Beverly! (I did spend a lot of time in London's legendary Scala Cinema, even though I'm not and never have been a Londoner! Ha ha, that was some great place!)
Because that’s what this picture is about: how much people enjoy attending films at the New Beverly! We get some details about how it was started as a reparatory cinema back in 1978, and how the fellow who ran it, Sherman, was a very nice and quirky love hippie; and about how Sherman sadly passed on and the movie theatre was saved from becoming a fast-food restaurant by the quick-thinking action of its clientele (specifically Quentin Tarantino), and management of the place was turned over to Sherman’s son Michael!
Much of the movie is about how great it is to watch movies projected on 35mm film, and how marvelous it is to see a movie with a big audience! I agree heartily, ha ha! And the New Bev is, or was, indeed a wonderful place to see a picture! So a lot of this picture is simply people, be they filmmakers like Joe “Explorers” Dante and John “Into the Night” Landis, or simply celebrities like Kevin Smith and Seth Green! It’s all just a celebration party for a place, and a format, and a social ceremony that everyone who loves these things secretly knows is not going to last forever!
So there’s a certain melancholy hanging over the picture, and a few touching moments in there too, like when New Bev regular Clu “A Nightmare on Elm Street 2” Gulager reveals just how important the place is to him! But really, there was and is more drama surrounding this modest movie palace that’s taken place since the movie was finished! The lady who made it, Julia Marchese, was an employee there, and was briefly made a manager before the powers that be – Tarantino’s assistant, apparently – decided she wasn’t management material!
She may well not be, and she may be right about the wrongheaded approach they’re taking in running the cinema! On the other hand, she may be totally wrong, and I hope she is! I don’t know for sure, but I do know that the picture of the New Bev she paints in this movie is so appealing that I can hardly conceive of any change that would be for the better! The word is that Tarantino will only screen 35mm prints there, and that’s fine, but I sure hope he doesn’t lean as heavily on his own work as it appears he might!
Out of Print itself is not a great documentary – it’s poorly organized, chatty and repetitive! It’s also a sterling example of preaching to the choir, which I don’t mind so much! There are some nice images – at least some of it appears to have been shot on 35, which is grand – and it makes an excellent case for preserving that format! So as a call to arms it’s not bad at all! It also has a nice parade of New Bev regulars, and some good stories! I’m not sure how I’d feel about the movie without knowing the backstory, which certainly gives it an extra dimension! Anyway, you can watch it yourself and see what you think, and then go out to your local independent cinema or rep house and see a movie, ha ha! I give Out of Print two golden Gulager plaques!
Posted by Burl at 22:01