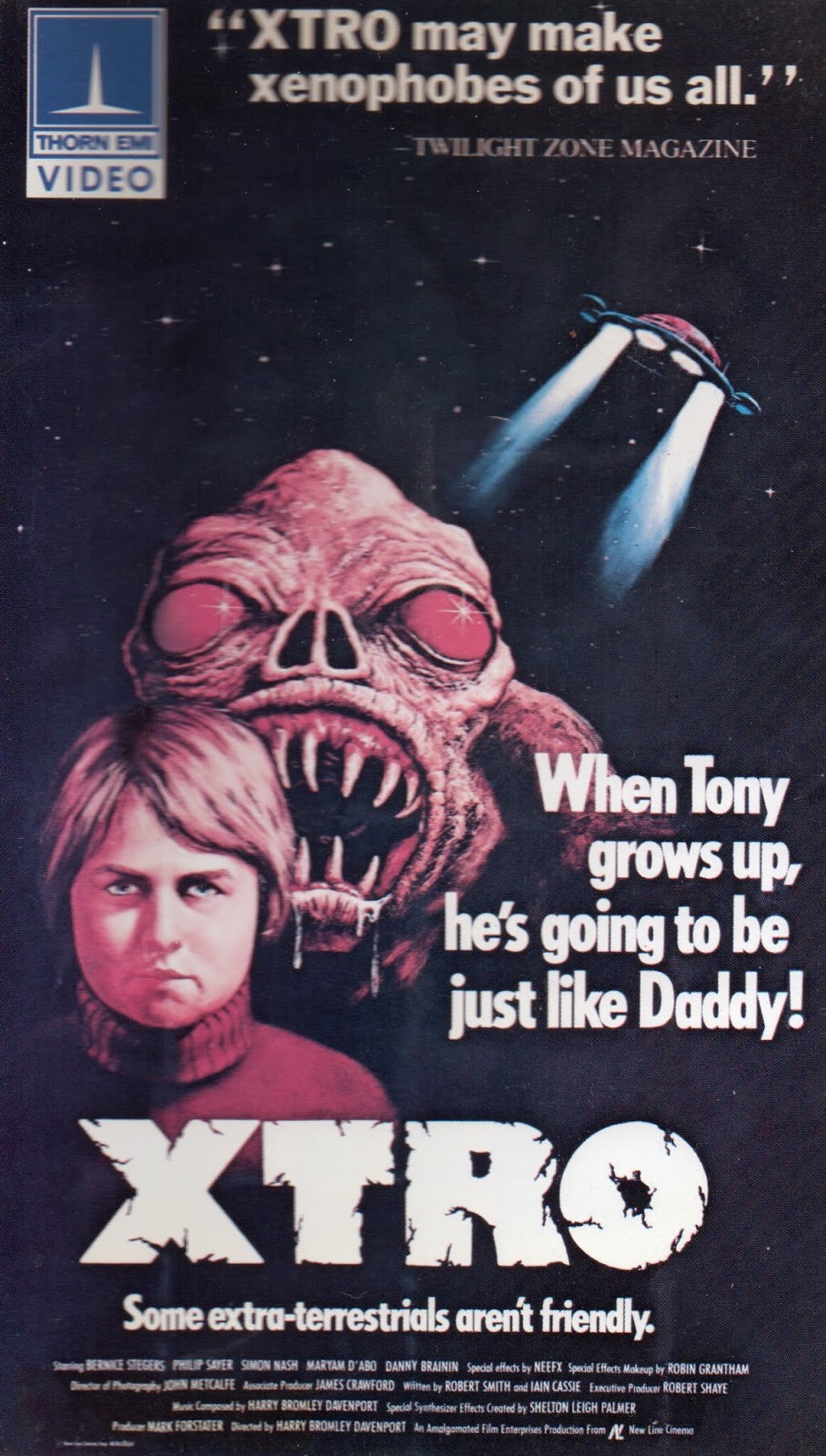 Hi xenomorphs, ha ha, it’s Burl, here to review a bizarre pulp favourite from Blighty! Ha ha, this one’s called Xtro, and it’s one odd soda cracker! I can only guess that it got the green light after E.T. was so popular and someone hit on the tag line “Some extra-terrestrials aren’t friendly!”
But it’s a closer cousin to the Alien-inspired goo-movies that were numerous at the time, pictures like Galaxy of Terror, Forbidden World and Horror Planet! It also has elements of Shoot the Moon, which is to say that it contains both goo and high dishwater drama!
Ha ha, it all starts with a happy family at the country house! Mum takes off to do some errands, leaving little Tony playing sticks with his dad Sam! Suddenly, pchew! the sky turns black and Sam is sucked up into the blinding light! Then, three years later, Mum has a new fellow, an American fashion photographer, not as bad a guy as Trent from The Way Way Back, sure, but none too charming either! Tony has nightmares of when Dad was whisked away, but everybody else believes he simply took a runner! There’s also a comely French au pere played by Maryam d’Abo from The Living Daylights, with a boyfriend played by David Cardy from The Keep!
A goochy lizard man appears, makes savage love to a lady, and hey presto, Sam is reborn! He sets about reintegrating himself into the family, to the photographer’s dismay, and thence, because he’s now more alien than man, transforming young Tony into a half-alien as well, using the old cosmic hickey technique! Then, quite naturally, Tony gains the power to bring his toys to life, and this leads to midget clowns and six-foot G.I. Joes and terrified neighbours and au peres transformed into egg-laying machines, and other weird mayhem, and eventually Sam sheds his human skin to become a steely-skinned metalman and takes his beloved son up into the stars! There’s a finale which might have been a dream or might have been a hastily-conceived replacement for the original ending!
Ha ha, this is a weird one all right, and if you’re going to watch it, I recommend doing so late at night when your mind is a little weird anyway! (Avoid the sequels, however, ha ha!) I recall really enjoying this when it was originally released on video – I felt, in fact, that I’d made a very special discovery, and was proud to pass it along to my similarly horror-loving friends! I enjoyed it a lot less this time around, however! It’s a bit disreputable and somewhat tawdry, but it’s short (just over 80 minutes!) and frequently bizarre! I think I’ll give it one and a half wiggly hammers, but those of you who enjoy freaky trash ought to check it out anyway! Ha ha!
Posted by Burl at 11:41